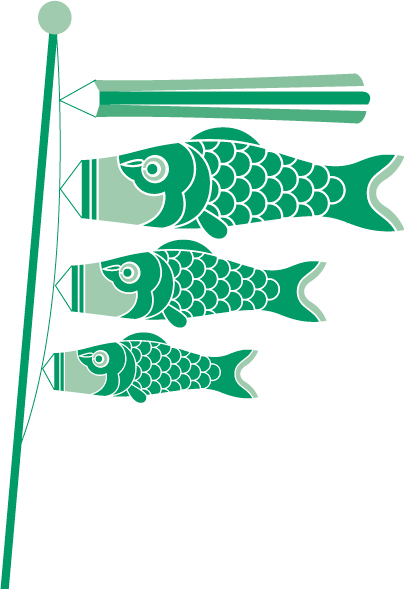 The Japanese Golden Week falls around the end of April and beginning of May every year where there is cluster of national holidays during this time. The “week” starts on April 29, a national holiday celebrated as the birthday of Emperor Showa, who passed away in 1989.
Golden Week is golden because it’s the longest holiday period of the year! Japanese employees aren’t usually granted a lot of vacation time. In combination with well-placed weekends, Golden Week becomes one of the country’s three busiest holiday seasons, besides New Year and Obon.
You’ll notice it’s Golden Week when you see all the koinobori (carp streamers) hanging everywhere. At home, families also display samurai dolls that represent strength and success to to pray for a healthy and successful life for their children (see our doll feature on page 26).
Golden week is also golden because it typically has some of the best weather in Japan out of the whole year! If you’re willing to negotiate crowds and queues, and pay the inflated prices, GW is a fabulous opportunity to bask in the sunny spring weather and explore some more of Japan. If you’d rather avoid the masses and just stay inside, though, well that’s understandable too!
However you end up spending the time, there’s no escaping discussing what you did during GW in Japanese. Even if you do nothing at all, at least you’ll get a chance to practice your nihongo!

Chatter by the Cherry Tree
Get on the right track!