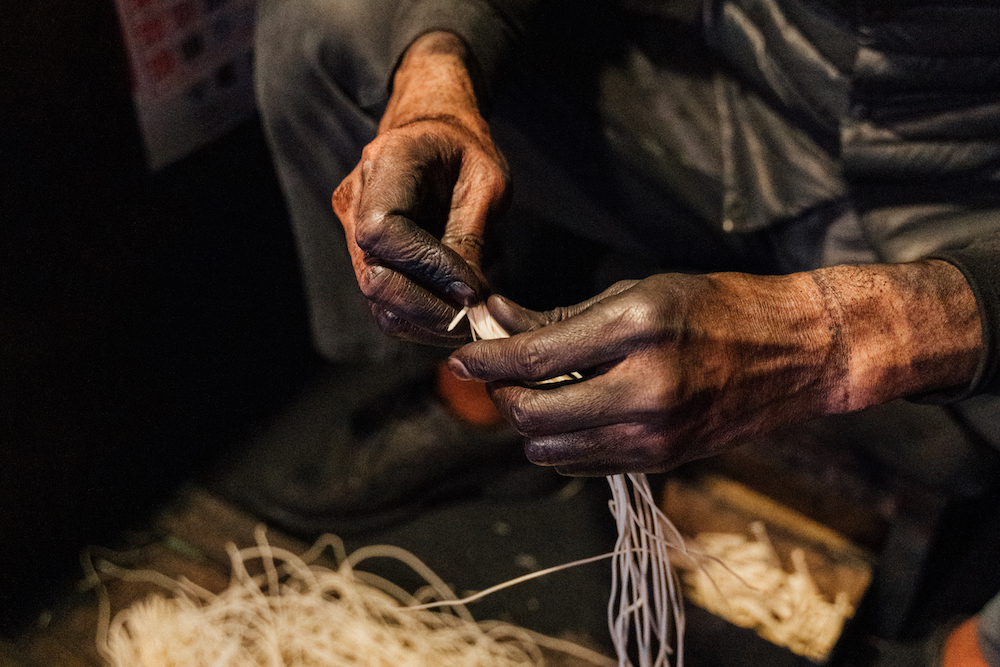 Why write by hand today, much less spend years learning the esoteric art of shodo calligraphy, when you can type and text? Receiving a handwritten letter is a rare joy these days, and no doubt in the Edo Period (1603-1868) a koibumi (love letter) in elegant, fluid strokes was even more thrilling. Back then, everyone from besotted lovers to office clerks wrote with sumi, ink made from soot and nikawa, an animal-derived, gelatin binder. Today, sumi is used primarily in shodo calligraphy and sumi-e ink painting. If you’ve ever tried these, you were probably struck by how long it took to rub the hard, rectangular inkstick against an inkstone before it would start to dissolve in water. These handmade inks give you deep, lustrous blacks and beautiful bleeds, with which the cheap, pre-mixed ink schoolchildren use cannot compare. It enables greater variations in concentration (especially important in sumi-e) and makes for a meditative transition from hectic everyday life to a tranquil world where all that matters are the ink, brush and paper before you. Even though you may see few contemporary examples of writing and artwork using handmade sumi these days, the 443-year-long legacy of Kobaien, an ink maker occupying a lovely, old wooden compound a few blocks from Kintetsu Nara Station, is testament to its enduring appeal.

Kobaien literally means “old plum garden,” and there is indeed an old plum tree in the central courtyard—though not the 16th-century original—as well as a cherry. Our visit is well-timed: Kobaien’s PR Manager, Aki Fukuro says, “Work stops when the cherry blossoms scatter in April and does not start again until November––nikawa emits a real stench in warm weather.” Through the middle of the narrow, deep compound run aged trolley tracks for transporting materials. Surrounding the courtyard are workrooms for the various processes that are involved in making fine sumi; in fact, the entire process is carried out in-house, including the crucial manufacture of soot.

Writing with brush and sumi took root, along with Buddhism and other aspects of continental Asian culture transplanted to Japan, in seventh-century Nara. Sumi was made by local monks, the only ones literate and capable of using it at the time, and today 95% of Japan’s sumi is still made in Nara Prefecture. Kobaien is the oldest of these makers, currently run by the 16th-generation and first female head, Shoko Matsui.

“Work begins first thing in the morning with melting down hard globs of nikawa, and soot is made continually from 9 a.m. to mid-afternoon,” Ms. Fukuro explains as she shows the Kansai Scene team around. Some 200 small, bell-shaped earthenware vessels containing wicks burn in rapeseed oil—or sometimes sesame, paulownia, safflower, daikon seed, or camellia, the last of which makes the finest-grained soot and the highest-quality product. An artisan rotates each vessel 45 degrees every 20 minutes, between rotations fashioning new wicks from rushes, also a precision task as wick size affects soot consistency. Rotation ensures the vessel interiors are evenly coated. Cycles of eight rotations, twice a day produce 400 vessels’ worth of soot.

Next, the soot is mixed with nikawa, from cow or sometimes goat, deer, boar, or donkey, which look like different varieties of prehistoric amber. The two are rolled together into gluey balls, kneaded and trampled with bare feet like grapes at a winery. In fact, the parallels with wine don’t end there: sumi improves with age, and certain vintages are particularly prized. According to Ms. Fukuro, “a master calligrapher might request a 1970 sumi, from a particular vegetable oil and animal gelatin, for its shade or depth of black or the way it bleeds on paper. As a rule, older bleeds more beautifully, and we have sumi over 100 years old upstairs.”

Just as in the Edo Period, the black mixture is placed in pear wood molds, then removed, coated in sawtooth oak ash and dried in 16 stages with moisture levels carefully modulated. This takes between a week and a month, then long chains of sticks are hung with straw twine for a period lasting six weeks to six months. The ash is washed off and the ink sticks are glazed and fired like ceramics. Almost done now: The sumi is polished with clamshell before gold, silver or other colors are applied to decorative relief motifs on the tops. They’re now ready for sale, and the cycle begins again. At the end of each long day of handling soot and ink, the artisans’ faces and limbs are thoroughly blackened, such that they soak in a bath on site before going home. Ms. Fukuro: “The soot won’t come off unless they rub down first with powdered nightingale droppings, which we always keep on hand.”

Ink sticks are highly concentrated and last a surprisingly long time. The Kobaien shop offers a full range of grades and shades, as well as other calligraphy supplies. From November to April, you can make reservations to observe sumi making or try your hand at making your own, which is sent to you after it has dried. The pandemic has spurred many to take up new hobbies they might not have had time for before, and renewed our appreciation for the slow life. Sumi may be just right for the present moment.