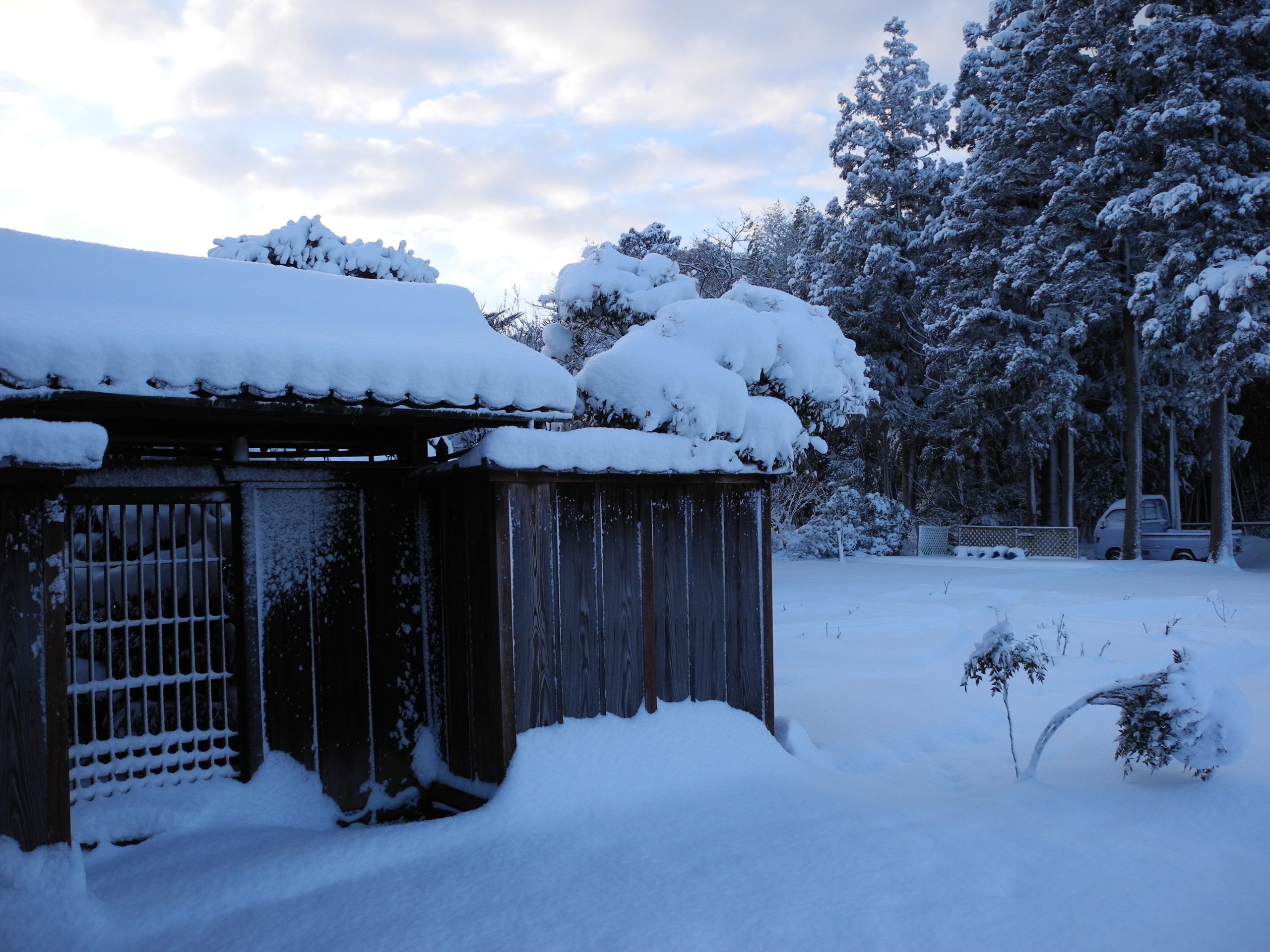 Enduring the Cold in a Traditional House

I believe Japanese people are much more sensitive to heat than they are to cold. The proof of this can be found in traditional houses, which were built to be cool in summer but not warm in winter. The high ceilings, the wraparound doors to the outside, the dark cave-like interiors, all are designed to bring in every stray breeze in summer. But the same features make winter even colder.

I live in such a house, a large farmhouse dating back about 350 years, whose basic design of four rooms in a square has not changed. I have lived here for 40 years, wife of the current 19th-generation heir. We have made some improvements, such as a modern bath, heated by a boiler instead of a wood fire (25 years ago) and a sewer system and flush toilets (8 years ago). We have no central heating, just kerosene space heaters. In some places you can see the outside through cracks in wooden floors. There are no walls, for the most part, just sliding doors that are naturally drafty. The ceilings are far above, and collect the heat, leaving us shivering at floor level.

Preparations for winter begin when the first chill comes and we change the doors inside the house, from the summery reed ones that let the air through to more substantial ones. The next phase is preparing the kerosene heaters — Oh, that smell! — and blankets for the beds. This happens around the beginning of November.

The first part of winter, until New Year, I don’t notice the cold much because I’m too busy. The holidays loom, with cards, cooking, presents…and the dreaded Big Cleaning (O-Soji). Custom dictates that everything in the house should be cleaned, mended, and organized at this time. Heaven forbid that a respectable family should have last year’s dirt still in the window sash grooves or last year’s holes still in the garments or bedding when the new year rolls around. This is a terrible time to be cleaning with buckets of water. One of the first innovations I made as a young wife was to use warm water for rinsing the rags used in wiping down the doors, floors and beams. My mother-in law used cold water. No wonder her hands were always so red.

Then there are the preparations for New Year itself. Mochi (glutinous rice) must be pounded — we still do it the traditional way with mortar and mallet — and made into the large, pillow-like kagami-mochi. The various gods must be plied with small bottles of sake to sweeten them up for the year to come. Flowers, candles, entranceway decorations, all these things must be prepared in between bouts of O-Soji. On the final night of the year, after the traditional dinner of toshi-koshi soba (year-crossing noodles), while everyone else is watching TV and eating mandarin oranges, you will find the wife in the kitchen, doing the last cleaning jobs of the year and preparing the ingredients and utensils for New Year’s breakfast the next morning.

After New Year’s Day, activity ceases, and suddenly there is ample time to feel the cold, which is at its worst in January and February. Every time I want to move about in the house, I have to go and turn on heaters in advance. This constant moving from warm to cold is a strain. Outside, it isn’t really so cold — it rarely gets below freezing — but when inside and outside are almost the same temperature, life slows down a lot.

Then it starts to snow. Our area doesn’t get too much; maybe 3 or 4 times a season, up to about 30 cm. Enough, however, to have to shovel a path to the door and take our turn with the neighbors, clearing public areas. One welcome thing the snow brings is light. In our cave-like house, the reflection of the snow makes everything brighter on dark winter days.

February is the longest month of the year for me. The cold begins to feel like a poison. I hunker down in my bedsocks and lap rug (ideally with a cat on my lap) and count the days until light, color and warmth come back again. The Zen proverb goes, “In summer we sweat, in winter we shiver.” It means we must endure what we cannot change.