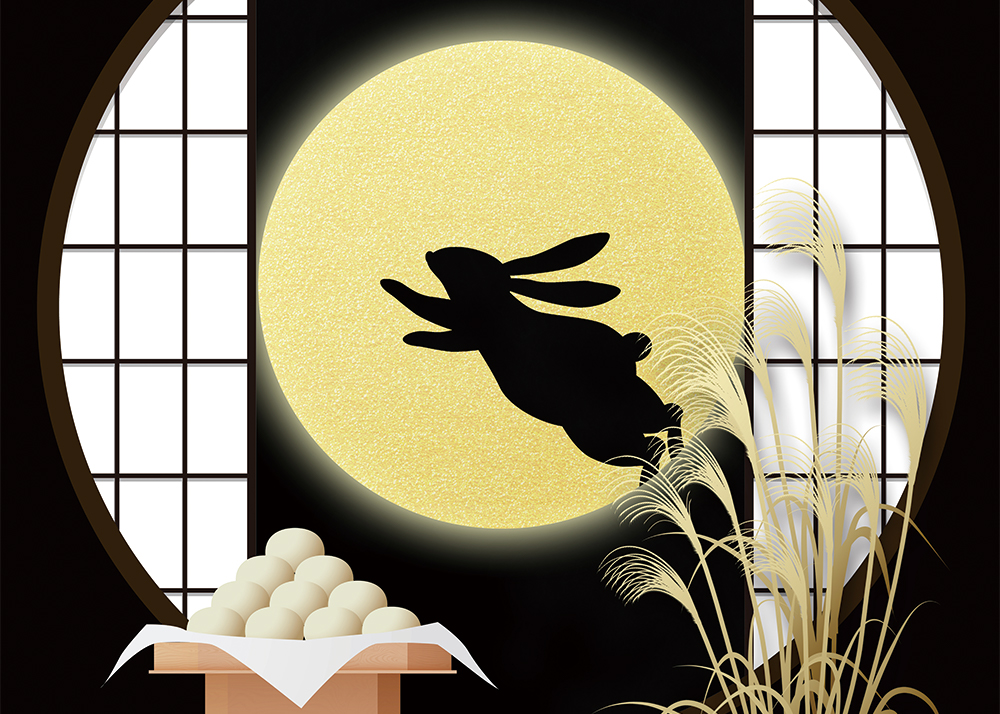 Even in this year of uncertainties, one thing we can always count on is the turning of the heavens. It is interesting the divide between those cultures that place higher precedence in the sun, and those who prioritize the moon. Although the Japanese consider its imperial line as descending from Amaterasu the Sun Goddess, culturally speaking, the moon takes on far greater importance.

The Chinese philosophy of Yin and Yang uses the moon as a primary example of yin: femininity, passivity, softness, rest. Even in contemporary Japan, the softer facets of Japanese culture have their roots in China, and few things feel as restful as gazing at the moon. Rising after the harvest, the autumn moon is an important cue for people to begin turning their attention toward leisure.

The traditions of autumnal moon viewing began with the Imperial court, during the culturally effluent Tang Dynasty (618–907). This Mid-Autumn Festival spread throughout Asia, arriving in Japan as early as the 8th century Nara period (710–794). Moon viewing parties (tsukimi) took on a more grandiose form in the Heian period (794–1185), as aristocrats celebrated its beauty in music and verse while trying to drink down the moon’s reflection in a cup of sake. As in China, offerings were made to the moon in the form of soybeans or fruit. Sometime during the near incessant warfare of the three centuries that followed, swordsmiths found that when the forge-heated steel took on the color of the autumn moon, the edge of the sword was ready to be tempered.

By the Edo period (1603–1868), commoners too had joined in the festivities, offering part of their rice harvest to the gods as thanks. Celebrations were held even at times when the moon wasn’t visible. Known as Ugetsu (Rain Moon), the word can be found in the title of Ueda Akinari’s 1776 horror story Ugetsu Monogatari (Tales of Moonlight and Rain), and in Mizoguchi Kenji’s Academy Award-nominated 1953 film.

The sweeping cultural changes of the Meiji period (1868 – 1912) ushered in what we’d consider to be “modern Japan,” one being the shift from the Chinese Lunar Calendar to the Western Gregorian, the movement of the sun now dictating the movements of society in The Land of the Rising Sun. But the moon never lost its importance, and the custom of tsukimi still continues. The peak night is known as Jugoya, marking the 15th day of the eighth month of the traditional lunar calendar, which this year falls on October 1.

People still make offerings to the moon in the form of sweet potatoes, and decorate with pampas grass, which resembles the offerings of rice stalks made by the ancestors. As well as sake, the moon-viewing custom is accompanied by eating tsukimi dango, round white rice cakes that resemble the moon and are thought to bring health and happiness. A large number of restaurants serve tsukimi soba or tsukimi udon, which is a bowl of noodles topped with a raw egg. Fast food places offer tsukimi burgers, with a fried egg laid atop the meat. Some confectioners make mooncakes, commonly found in Chinese communities. Throughout the country, teachers of traditional tea ceremony craft a special meal.

A popular pastime (perhaps due to the sake) is to find the silhouette of a rabbit pounding mochi rice cakes with a mortar on the face of the moon, whose origins may lie in Buddhist tale about a rabbit that offered itself to a famished interstellar traveler, in the ultimate form of self-sacrifice. Moved, the traveler returned to the moon with the rabbit, where they’ve been visible ever since. Another possible theory is that the word for pounding mochi, mochitsuki, is a pun on mochizuki, or full moon.
There are some who may not look at the moon at all, too focused on sake and rice cakes. The proverb Hana yori dango (“Better rice cakes than blossoms”) infers that a feast for the eyes can’t match one for the stomach. I suppose we already know what these types are up to during cherry blossom viewing parties too.

There are ample places to view the autumn moon throughout Kansai, the most romantic being watching it rise behind Himeji Castle. The grounds of Ise Shrine are similarly magical that night. Another popular place is Arashiyama, following the custom of the ancient nobility who watched it pass over Togetsukyo Bridge (“Moon Crossing Bridge”) or from boats on Daikakuji Temple’s Osawa Pond.

As the Buddhists see the full moon as a symbol of enlightenment, many temples throughout Kyoto open their grounds to night viewing at this time. Kyoto’s bigger Shinto shrines also mark the occasion with festivals, despite their aforementioned connection with the sun goddess. (Refer to the listings pages of this issue.)

At the time of writing, it is still too early to predict whether or not these events will be held during this particular year, due to health concerns. But no bother. The best spot is the west bank of the Kamogawa river, as the moon rises over the Higashiyama hills. A fine reminder that all things, good and bad, will wax and eventually wane.