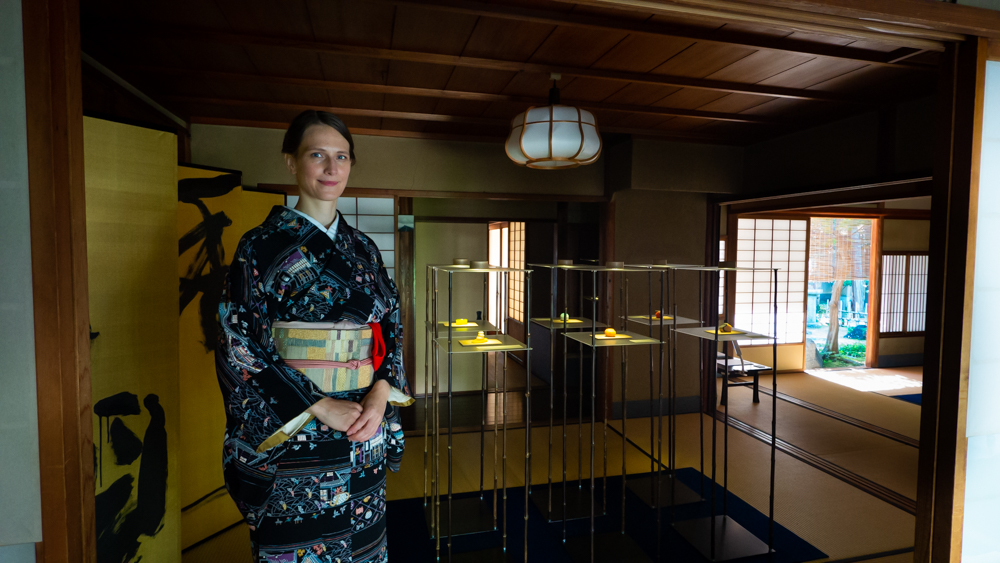 The outer gate of Yuuhisai Koudoukan located a mere stone’s throw from the Kyoto’s Imperial Palace compound, is hard to spot; the narrow corridor to which sandwiched between two apartment buildings. A vibrant noren hangs above the inner gate, where a maple lined stone path leads to the mossy inner sanctuary and the stately wooden structure of Yuuhisai Koudoukan itself.

Yuuhisai Koudoukan was first built as an academy by Minagawa Kien, a scholar and philosopher of the Edo era. The current structure is not Minagawa’s original academy, though it does have a long history of its own, dating back to the beginning of the Meiji era. Thanks to the efforts of locals, it narrowly survived demolition, and for the past eleven years has been run as a foundation and a private cultural institution. Today, it is a centre of learning for Kyoto’s Japanese and foreign communities alike, above all, but not exclusively, in the Way of Tea and wagashi, the exquisite sweets that accompany ceremonies. Besides its series of lectures and workshops, it has also served as an atmospheric location for exhibitions, most notably the KYOTOGRAPHIE International Photography Festival.

After closing in February due to the pandemic, the lectures and even tea ceremonies with simultaneous interpretation were trialled online with some success, but still lacking something when compared with the in-person experience. With all the hardship and shutdowns this year, the annual exhibition of entries to its kyogashi (Kyoto-style sweets) design competition, a tasty showcase that is at once an expression of creativity and culture, was especially welcomed enthusiastically by the public. Participants both professional and amateurs from around Japan sent in entries inspired by this year’s theme “Zen” (themes in recent years have been centred around works of literature such as The Tale of Genji).

The foundation received an astonishing five hundred submissions, categorised by design or ready-made; the former category for non-professionals of all ages who sketched out their wagashi concepts on paper, with the winning entries brought to life by local sweetmaker, Oimatsu, and the latter for confectionery professionals who took their vision through to the final product, and were judged not only on their design concept but also the way they harmonized the ingredients and presented them. On the judging panel were sweets specialists, artists, tea ceremony masters and even the Mayor of Kyoto, who chose fifty kyogashi for display across four different venues including Yuuhisai Koudoukan, the Nakadachuri rest area in the Imperial Palace Park, JR Isetan in Kyoto station and the former Mitsui Residence, a grand estate in the Shimogamo area.

The Zen theme is perfect for this chaotic year, impacted so heavily by the effects of the novel coronavirus on Japan and the rest of the world. Kristyna Cislerova, a tea specialist and researcher, who has been working with the foundation and is married to a Zen Buddhist monk, referred to the title of her favourite sweet, Bonno soko boudai, which connects to the Zen ideal of accepting things as they are.

Laid out on individual stands, the kyogashi designs range from the simple to the sublime and even ones that are a little silly. Artist Nicchimo designed his kyogashi as a face, complete with a long, yellow nose and bright pink cheeks in a cheerful, kindergarten style. “When I do zazen, I can’t help but laugh,” he wrote in his entry. Kyoto’s mayor was attracted to the lighthearted message, and awarded the sweet the Special Prize, hoping that the sight of the funny face might bring visitors joy.

Professional confectioner Matsushita Soutaro was awarded the Grand Prize in the self-made category for his elegant sweet. One of the jury described it as a true representative of the many, blended tones of the “Zen mind,” which is never purely black and white.

More than just visually appreciating the displays, visitors also have the chance to savor a palm-sized “piece of Zen.” The sweetness of the kyogashi is balanced by the bitterness of some freshly made, green tea served in one of Yuuhisai Koudoukan’s many unique and charming tea bowls.

Like many businesses in Kyoto, Yuuhisai Koudoukan has been hit hard financially by the sudden drop in tourism, but the exhibition proved a great boost. Their recent crowdfunding effort also exceeded its goal in two days and went on to raise more than ¥2 million in a week. Staff are hopeful that they will be able to continue providing events for the public and members in the future, perhaps in a hybrid online-and-in-person model.

Zen practitioners accept life as it is. The sweet taste of the kyogashi together with the bitterness of the green tea is a reminder that every year, even one as dramatic and unsettling as 2020, has its moments of calm, joy and tranquility.

The Moon in a Sake Cup
In Winter We Shiver