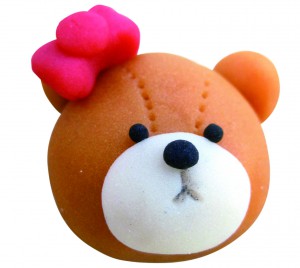 Wagashi – a traditional Japanese confectionery made using mochi (Japanese rice cake) and sweet bean paste – has always been a part of Japanese cultural history. Originally used for religious ceremonies, in the past wagashi was often out of reach for the average person. These days though, the delicacy is available to all and is still used in traditional tea ceremonies. It’s often favored by the older generation. Takayuki Maeda, an up-and-coming celebrity chef, is trying to reshape the old image of wagashi and bring it to a younger generation.

Traditional-style wagashi might take on the shape of a leaf, a flower or a seasonal fruit. One look at Mr. Maeda’s wagashi though, and you can tell this guy has something special and unique. A hand-crafted Sonic The Hedgehog, Marilyn Monroe, Snoopy, Tom Cruise, or even Prime Minister Abe; if your mind can conceive it, Takayuki Maeda can make it. It’s a unique ability that has made him popular on local TV and in magazines. His handmade wagashi are an interesting new take on a craft that is centuries old. When asked why he thinks he is gaining such popularity, he says “I’m not aware of anyone else that is doing anything similar.” And it’s true. When asked if he feels traditional wagashi is boring, his reply is “No, not at all. I actually really love traditional wagashi and feel it is something very culturally important to Japan. The reason I make the kind of wagashi that I do, is to make it more appealing to the general public; especially the younger generation.”

Mr. Maeda says wagashi has been in his family for three generations. His grandfather started a small wagashi business, so it’s something that has always been around him. One thing is very clear, Mr. Maeda is very passionate about bringing Wagashi into the mainstream. An advocate of wagashi being a healthier alternative to most sweet foods, he says it is made using all natural ingredients.

With the help of event organizer Yuki Mayco, Mr. Maeda has been hosting workshops throughout Kansai in both Japanese and English. His workshops have proven to be quite popular. Attendees to one of Maeda’s events can expect to be treated to some complementary dango (a sweet Japanese dumpling made from mochiko – rice flour), green tea, and a cultural presentation on the history of wagashi. Mr. Maeda also demonstrates his wagashi crafting skills and attendees get a chance to craft their very own unique wagashi.

For more information on Maeda’s up and coming demonstrations, visit his facebook page: facebook.com/sakai.motimoti

Foodspotting
The Treasures of Noh