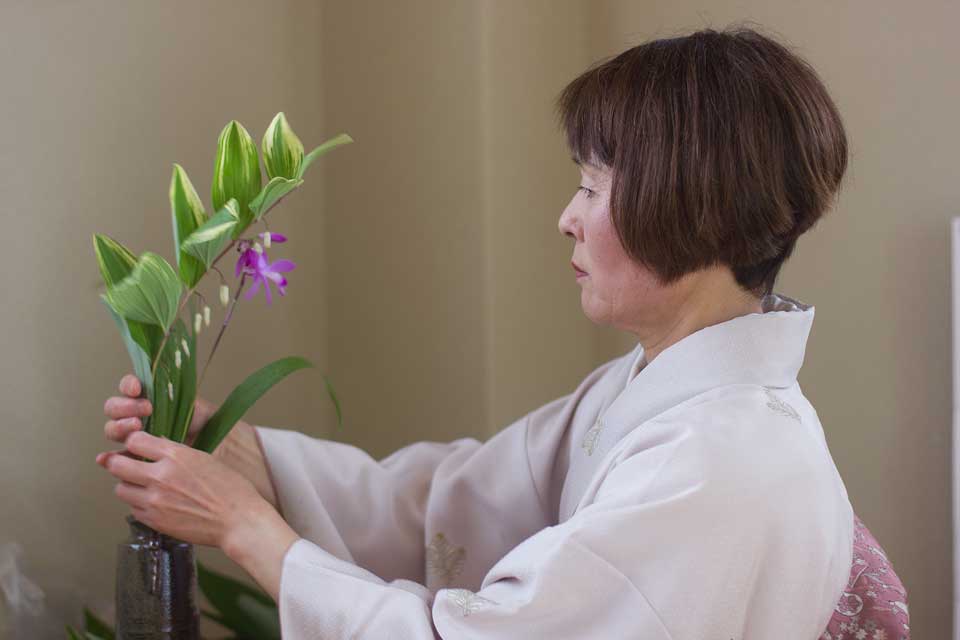 In a simple tatami (straw mat) room in Osaka, women in beautiful kimono move through the motions of the ancient art form that is cha no yu (Japanese tea ceremony). All subtle movements and intense concentration, there certainly seems to be a lot more to it than just handling tea and water.

“It’s something formless,” says tea ceremony instructor Teruyo Sakaguchi. “The act of sharing tea with a guest is so simple, but it reveals everything about you.”
For all its precision and apparent complexity, correct tea-ceremony conduct is defined by a handful of unchanging elements. Water heated in a little hearth, implements and utensils chosen according to the taste of the host, and carefully placed and examined by each guest, flower arrangement, traditional clothing, and of course, the powdered green tea called matcha. The history of this practice is closely intertwined with the history of Japan itself. 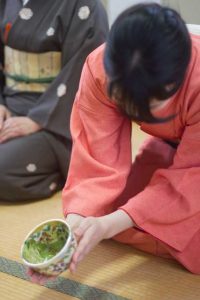 “The tea trees were originally from modern-day Cambodia and Myanmar,” Teruyo explains. “They were brought back to Japan by Zen monks returning from their travels in China. They would spend long hours in meditation on the tatami, and so they drank tea to keep themselves awake.”

The arrival of Zen in the Kamakura period (1185–1333) coincided with sweeping political change as the samurai class displaced the aristocratic elite as the real power in the land. The new religion, with its emphasis on discipline and direct experience, quickly flourished among the warrior class, who soon came to celebrate tea as an important status symbol.

In the 16th century, as the country was engulfed by bitter power struggles, the Zen monk and tea master, Sen no Rikkyu, took on the task of gathering the many regional customs into the unified system of manner and aesthetic that Japan has today. Hugely influential in his own time, Rikyu became the teacher and confidante of warlord Toyotomi Hideyoshi, but these were dangerous times, and he was forced to commit suicide by his former pupil. His teachings were carried on by his descendants, eventually branching into three distinct ryuha (tea ceremony schools). Teruyo belongs to the most popular of these, known as ura senke.

“When I was young – A long time ago! Girls my age had to learn tea ceremony, flower arrangement, cooking – these kinds of things,” explains Teruyo. “It wasn’t something I chose to do – in fact I didn’t enjoy it at all at first. I came back to it when I turned 40 and I’ve come to love it.”

Teruyo now sees tea ceremony as a life-enriching practice. “It’s also everything – poetry, color, taste, seasonality, but what you gain is spirit – something beyond words.”

Fluent in English, Teruyo now teaches tea ceremony to visitors from abroad. “Cha no yu contains the essence of Japanese culture – it is my hope that they will be able to take it with them to their own countries.”

There are several opportunities in Kansai to experience tea ceremony or even take lessons with an English-speaking instructor. To inquire in English, contact the International Affairs Department of the Urasenke Tankokai Federation.

Opportunities with other tea-ceremony schools:

Find Your Niche in Nakazakicho
Foodspotting