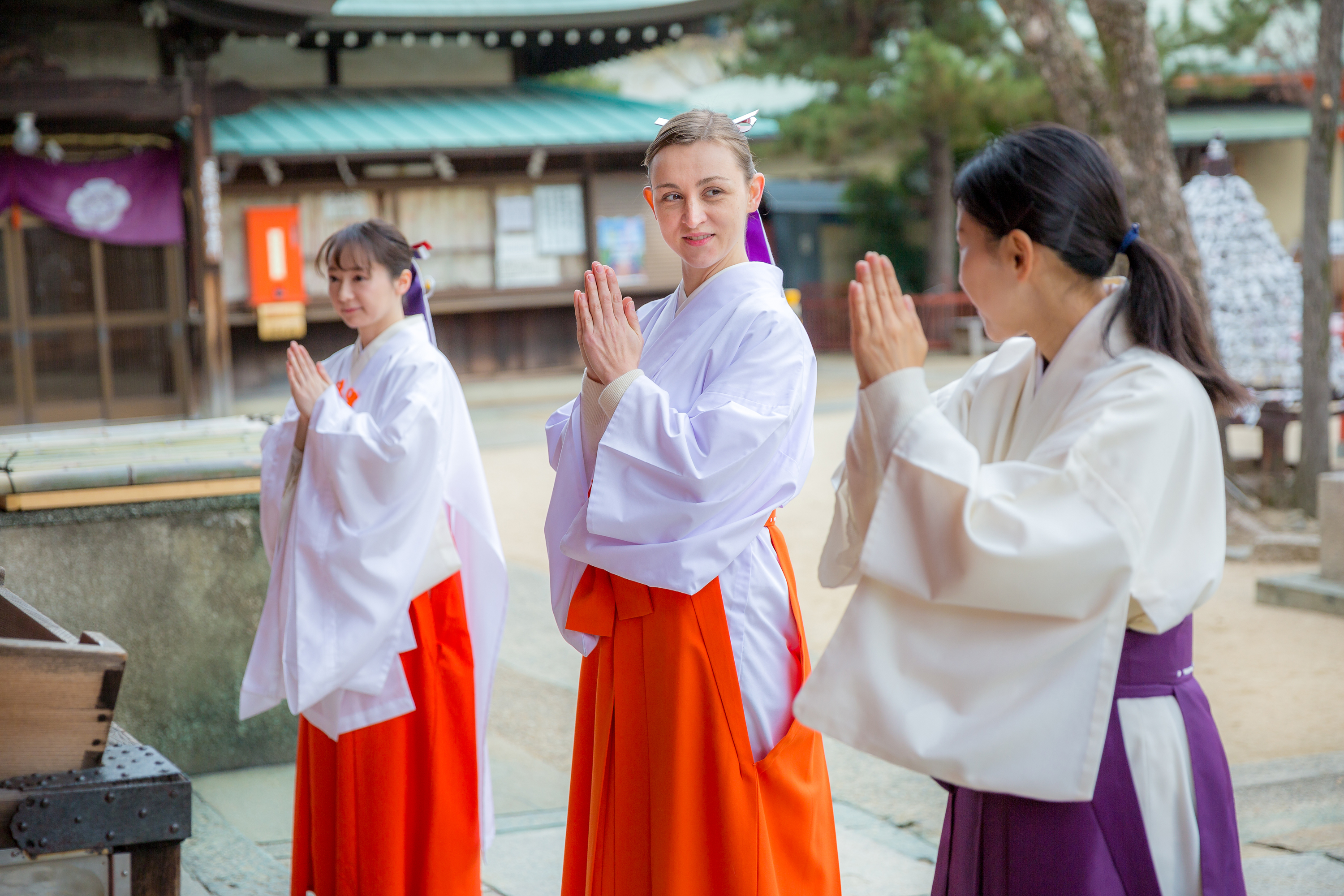 It’s not uncommon to see both locals and travelers to Kansai clad in kimono or yukata while visiting a Kyoto temple on a sunny spring day. But have you ever wondered what it would be like to wear the traditional dress of a miko or shrine maiden? For ladies looking for an under-the-radar Japanese experience, Suita City’s Takahama Shrine in the north of Osaka has just the thing.

Japanese Shinto shrine maidens play an important role in daily shrine life, performing rituals like sacred cleansing, ceremonial dances, and offering omikuji fortune telling to visitors. Usually, to become a miko at Takahama Shrine, you have to train for about a year, but for this miko experience, you can be transformed in an afternoon by Hanayagi Yukiaya—the wife of the shrine’s head priest.

First, she does your hair, placing a purple, white, and vermillion noshi hairpiece at the back of the upstyle. Then she wraps you in a white hakue (kimono-style jacket) and ties a layered vermillion skirt called a hibakama around your waist. Vermillion represents the color of the sun, which is highly worshipped in the Shinto religion.

Once dressed, you are guided out to the shrine grounds by gon guji, or secondary priest, Tomoko Okamoto, whose job it is to tutor you in some shrine etiquette and rituals. After several rounds of bell ringing, bowing, clapping, and praying, she brings you inside to teach you about tamagushi—offerings for the gods. This is where you learn to fold shide—paper shaped like lightning that is tied to sakaki branches to pray for rain and good harvests. Then you pour omiki, or “gods’ sake” in a special ritual called sankon no gi often performed at weddings.

After this, more cosplay fun is yet to come with several additions to the costume. Before entering the main part of the shrine, you will don the seisou or official dress. This involves putting on a chihaya—a special white jacket with long sleeves—and a tenkan, a gold-colored crown with flowers on each side. Wearing this formal dress, you are then introduced to the head priest who will perform a prayer ritual with you and another maiden.

After your rituals are complete and you are bade farewell, don’t miss the opportunity to browse the plethora of one-of-a-kind stores on the shopping streets between Takahama Shrine and JR Suita Station. Treat yourself to a late lunch or early dinner at one of the local eateries serving yakitori (skewered chicken), karaage (fried chicken), and scores of other cheap and cheerful favorites.

Apply for the shrine maiden experience in Japanese on the Takahama Shrine website or in English at www.hi-friends.co.jp. If you don’t speak Japanese, an English interpreter will be arranged.

Cost: ¥8,000 for the full ceremonial costume, including a CD of photos and cleaning fee