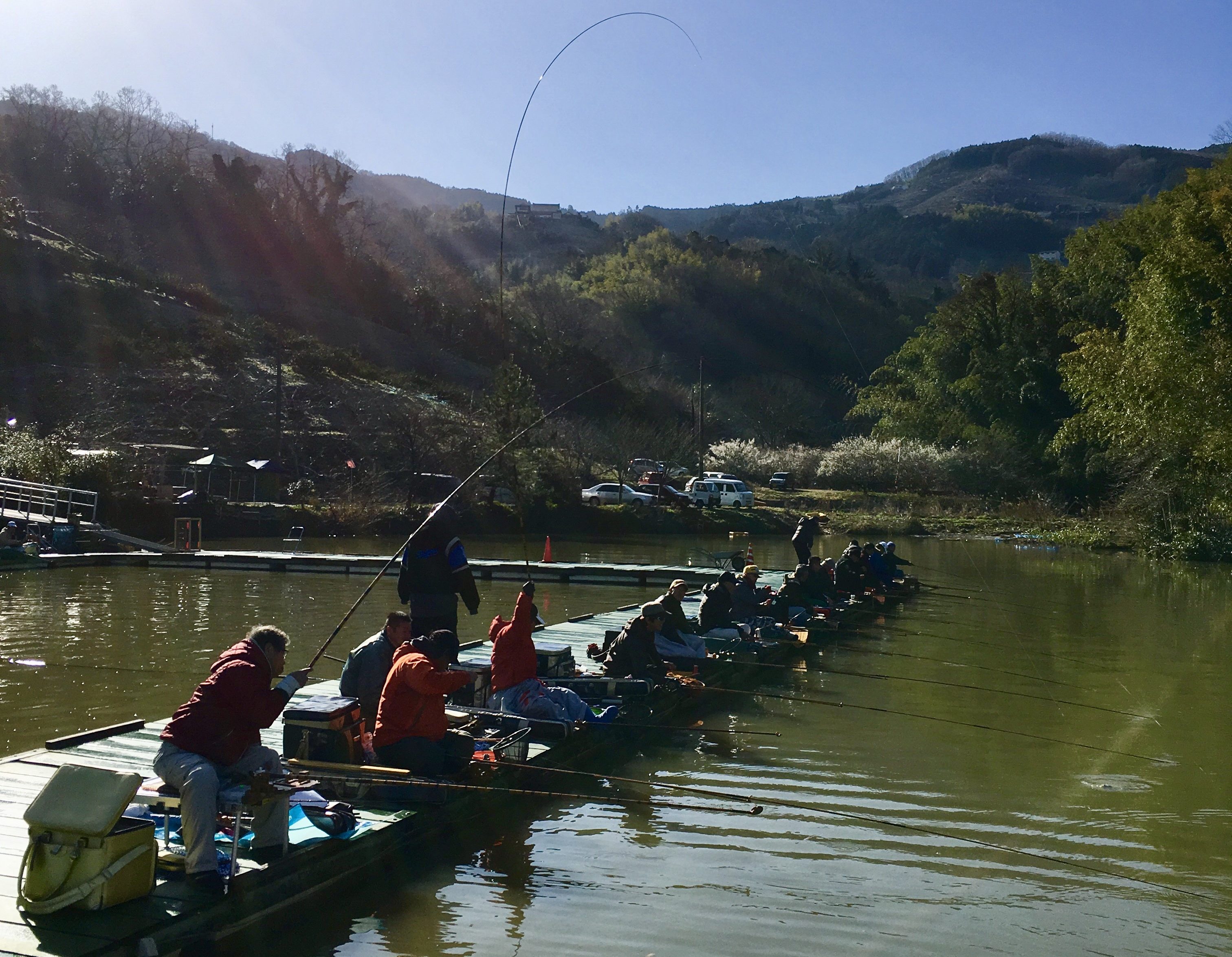 Hailing from the sleepy town of Hashimoto in Wakayama Prefecture, cousins Hiroyasu Yamaue and Shigeyoshi Yamaue are leading lights in the niche world of herabuna (Japanese crucian carp) fishing. More specifically, these men have dedicated their lives to crafting the highly prized bamboo rods, called herazao, that people require to carry out this curious hobby.

It was around the early 1880s that this style of herabuna fishing first came about, but its popularity has grown immensely in recent years. Niche monthly magazines are published dedicated entirely to this one method of fishing using a long, thin, wand-like rod with no reel. Special man-made lakes with pontoons installed are stocked with the fish, and herabuna fishing enthusiasts sit beside one another in a long line chewing the fat while waiting for their catch.

One such venue is Kakuredani-ike Pond in Wakayama’s Hashimoto region, established by the Kishu Herazao Association as a place for craftsmen to test and perfect their rods, while rubbing shoulders with local anglers.

Herabuna fishing is a type of float fishing using long, delicate floats traditionally made from peacock feathers that sit half submerged in the water. Barbless hooks can be loaded up with a variety of baits, but most common is a bread-like mash made from fuu (flour gluten) or mashed potato, as the fish in question are vegetarians. The bait dissolves quickly in water attracting the fish, while the fishermen wait, watching their floats intently for signs of the slightest nibble. The carp are closely related to the common goldfish and very gently nudge, suck, and nibble at their food in much the same way. Part of the art is being able to feel the delicate bites from a fish before striking at the right moment and landing the fish by hand—without the assistance of a reel.

As one would imagine, such a specific style of fishing requires a very special type of rod, something with which to feel even the slightest of tugs on the bait. According to Hiroyasu Yamaue (aka Komadori—his brand name), one of the top rod makers in the world, the craft of bamboo rod making originally started in Osaka, before two apprentices of an Osaka craftsman took it to Hashimoto. The area has been synonymous with herazao rod-making ever since.

Herazao are long and thin, delicate yet dynamic rods that look like ultra-slim pool cues. Combined from perfectly honed sections of Koya bamboo, they are finished with smooth lacquer and painstakingly decorated with detailed motifs. Customers pay upwards of ¥300,000 for a custom-made rod from a top craftsman such as Komadori and can expect to wait about six months to two years for their one-of-a-kind rod to be completed.

Komadori learned the labor-intensive art of traditional rod-making from his father. He started around the age of 18 and has been doing it for 50 years, making roughly 20 bamboo rods every four months. Like many traditional forms of Japanese craftsmanship, however, his art is a dying one. These days it’s tough to find an apprentice who has the inclination to put in the hours of training required to make these rods by hand. There are 130 separate steps involved in making the rods, and it would take at least five years, and maybe longer, for an apprentice to become skilled enough to do it on their own.

“Not only that, but there is no one left to make traditional tools,” Yamaue explained while in his wooden-floored workshop running a section of bamboo through a shichirin, a small ceramic brazier used to straighten and strengthen the rod. He said the special saws and other implements needed to craft rods in the traditional way can’t be found anymore.

Komadori is a purist, dedicated to making the fishing rods the traditional way using only bamboo. Sixty-four-year-old Shigeyoshi Yamaue (aka Yamabiko Shizuki), on the other hand, has gone in a different direction with his rod-making enterprise. Passionate about innovation, his business creates original and custom rods made from a blend of carbon fiber and bamboo.

In the 60s, sport fishing took off in Japan, and carbon rods became popular as they were more robust for fishing competitively and hooking as large a catch as possible.

Working alongside his brother Yamabiko Murasame, he crafts rods that are mostly half carbon, half bamboo, but expertly disguised to look just like traditional rods. The bamboo half is crafted by them in their workshop and then combined seamlessly with a carbon section, supplied by Shimano in a collaborative agreement. Yamabiko’s father was also a traditional rod maker, yet 40 years ago, when carbon came onto the scene, he worked out how to embrace the new technology.

Yamabiko has been honing his craft since he was about 15. His son is now his apprentice, and his grandson is set to follow in their footsteps. Ever the innovator, he also makes fly fishing rods with his unique bamboo-carbon product and aspires to make a walking stick for the queen. While the pure, traditional, bamboo-only craft is slowly dying out, demand is still strong for artisan herazao fishing rods, especially from the Asian market. Yamabiko says that perhaps 50 percent of his rods go to Chinese buyers. It seems there is plenty of fight left in this unique Japanese pastime yet.

Important update (Mar 27): Regrettably, the March 30th English-language fishing experience has been cancelled, but you are welcome to visit the pond at any time.

Visitors to Hashimoto can try fishing at Kakuredani- pond (closest station: Nankai Kii-Shimizu Stn), but it may be a good idea to bring a Japanese speaker.