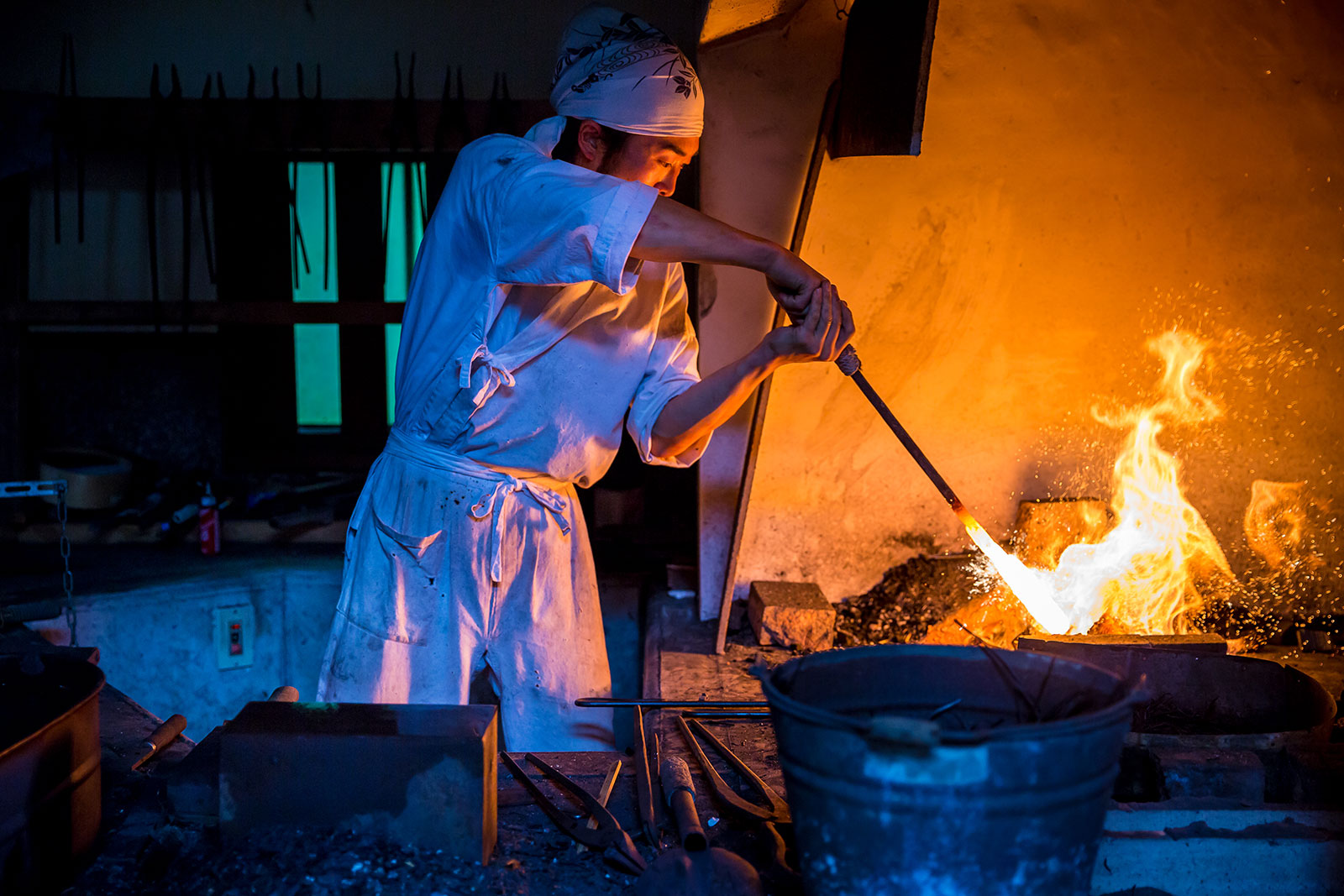 Stationed in a waist-high concrete pit measuring roughly two-by-two meters at his Katsuragi workshop in Wakayama, 33-year-old swordmaker Hamakawa Sadasumi stands face-to-face with a fiery forge. Reaching searing temperatures of 1,300 to 1,500 degrees, this blazing furnace is where the magic of Hamakawa’s sword crafting begins.

Dressed in classic white workman’s attire, including white tabi socks and wooden geta clogs, he patiently stokes the flames with a long-handled poker before swiftly withdrawing a chunk of superheated tamahagane steel from the furnace. Meaning “jewel steel,” tamahagane is produced from iron sand, a source of iron ore. Hamakawa sources his tamahagane from Shimane Prefecture, where one mountain town is now the exclusive source for the top-quality steel needed by craftsmen who make swords.

Placing the red-hot hunk of steel carefully on an anvil, he begins to vigorously hammer the glowing brick using a loud hammering machine then several handheld chisels, sending showers of incandescent sparks flying across the workshop floor. The forged tamahagane is folded transversely and longitudinally many times. It is heated and then cooled by water at each stage, which oxidizes the steel surface. Removing these oxidized layers reduces the steel’s impurities.

All this is before painstakingly shaping the blade using an array of hammers and chisels. Hamakawa explains the most crucial aspect of making a sword, apart from removing as many impurities as possible from the tamahagane, is molding the tip of the blade correctly.

“There’s nothing easy about any of the steps, but the most critical is the tip of the sword. If you mess that up, you can’t use any of the blade—you have to start all over again. It can all be over in 10 minutes.”

Adding a further layer of difficulty, there are basically no directions or formulas left to make ancient swords. “There’s no template for making that curve—it all has to come from memorizing what I was taught from my master during my apprenticeship.”

Hashimoto-born Hamakawa decided at high-school age that he wanted to eschew the typical corporate path that most Japanese youth follow these days. He wanted to forge a career out of making something with his hands, and finally sought out his sensei (master)—renowned swordmaker Gasan Sadatoshi from Nara Prefecture—who he would apprentice under for eight years.

During these eight laborious years, he learned the life of a swordsmith is a ritual of scalding heat, hard labor, and the unstinting pursuit of perfection. But the passion was instilled in him, and after passed his swordsmith examination and receiving permission to produce Japanese swords in his own style, he set up his workshop where he will endeavor to honor and uphold this dying Japanese art.

“It wasn’t until I started doing it that I realized I was going to become part of a movement of protecting a traditional Japanese craft,” he said. There are around 300 registered swordmakers in the country but probably only about 10 percent of those are making swords on a regular basis. For those few involved in katana production today, the samurai blade embodies the supremely honed workmanship for which Japanese craftsmen are renowned across the world.

Hamakawa at 33 is one of the youngest and plans to take on an apprentice himself one day.

Working two to three days a week in his workshop, Hamakawa says he could make two swords a month, but he usually only makes them to order, meaning he makes just a handful every year.

Buyers are most often Japanese or foreign collectors with a love of traditional Japanese swords. Some customers even buy his swords to display in their homes as a symbol of spiritual protection. A single, high-quality katana sword can cost anywhere from one million yen (US $9,000) to several million yen.

A soft-spoken, humble young man, Hamakawa says he wants more people to know about and appreciate the beauty of Japanese swords. He occasionally holds workshops and viewings for visitors to Wakayama who are interested in seeing the swordmaking process first-hand. For a chance to visit him at his workshop and watch him forge his blades, contact Koyasanroku DMO*.