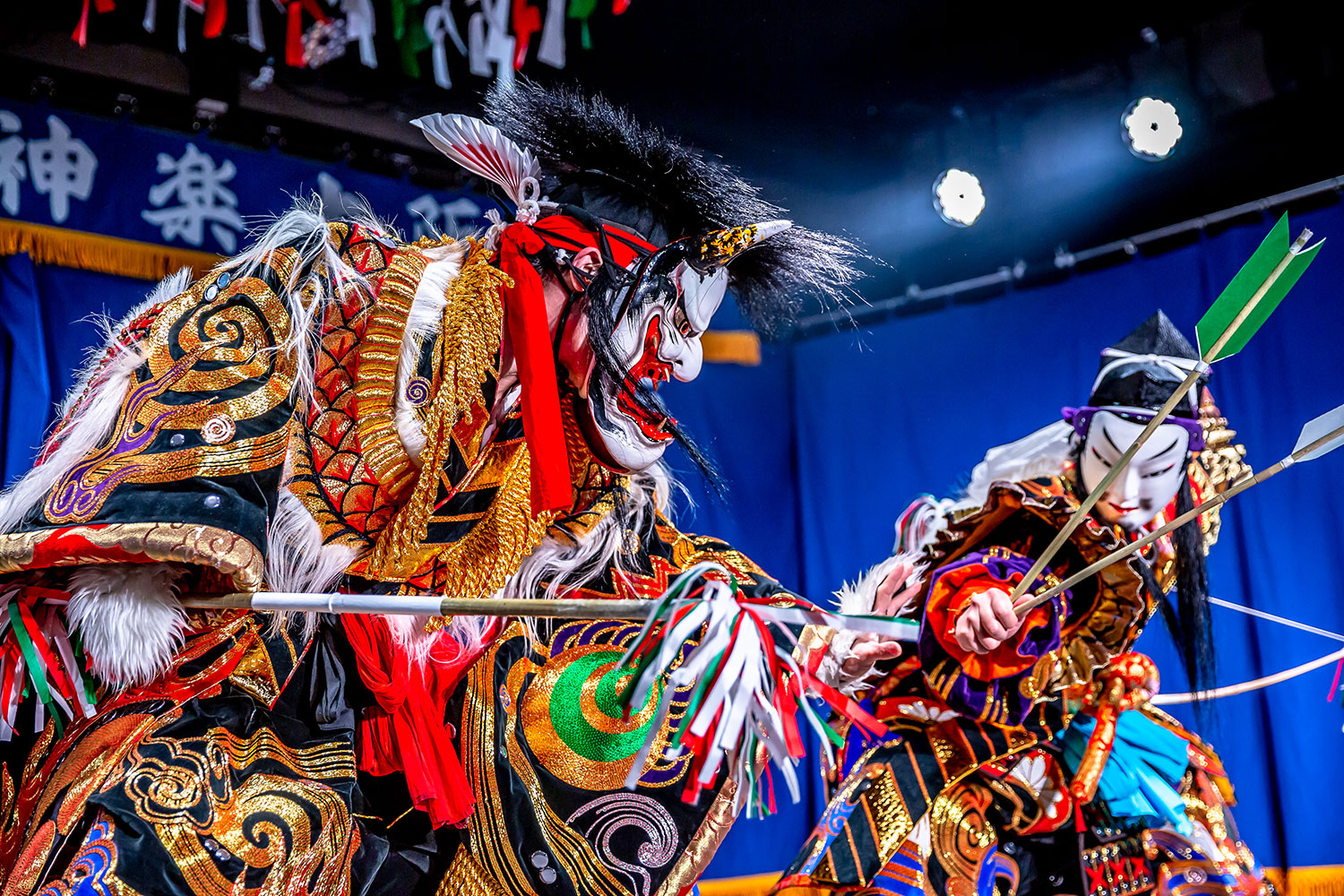 Billows of smoke create an otherworldly atmosphere as four fire-breathing serpents known as orochi, each measuring an impressive 17 meters when fully uncoiled, slink and slither across the stage in time with the music. Taiko drums are pounded rhythmically in unison with the iconic sounds of the Japanese bamboo flute as the four orochi square off against Susano-o a Japanese deity and this tale’s larger-than-life hero.

Even for Susano-o—the Shinto god of sea and storms—defeating the red-eyed multi-headed serpent with a body that, according to legend, extends over eight hills and eight valleys, is a formidable task. In an expertly choreographed scene at Osaka’s newly opened theater, the Iwami Kagura Naniwakan, the hero uses guile and expert swordsmanship (with a little help from some very strong sake) to evade the crushing coils of the serpent. With powerful blows, he eventually decapitates each of the heads one-by-one much to the elation of the crowd.

This play, entitled Orochi, is one of the most popular stories belonging to Japan’s oldest traditional performing art, kagura, which translates as “god entertainment.” Of the Japanese performance arts like noh, bunraku, rakugo, and kabuki, kagura might just be the most colorful and high-energy of them all, despite perhaps being the least known. Originating in local pockets of provinces on Japan’s island of Kyushu, the Iwami Kagura Naniwakan theater group has this year brought it to audiences in Osaka.

Kagura is believed to have originated from the Amano-Iwato “cave of the sun goddess” myth, which is recorded in Japan’s oldest historical record Kojiki written around 1,300 years ago. In the tale, the sun goddess Amaterasu takes refuge in a cave plunging the world into darkness because of her brother Susano-o’s (the aforementioned hero) bad behavior towards her. It wasn’t until the goddess of dawn, mirth, and revelry Ame-no-Uzume got all the other gods laughing, through music and a comical dance, that Amaterasu was coaxed out of hiding so that her light would grace the world once again. Kagura is one of a number of rituals and arts said to derive from this mythical event.

Kagura aims to tell simple stories, such as heroes defeating demons, that draw from the myths and legends of Japan. It also celebrates beloved characters like the always-cheerful god of fishing and good fortune Ebisu, who, in the plays where he is featured, often throws “bait” in the form of candy into the audience as he prepares to catch a fish.

The origins of these myths and characters share similarities with the pagan gods of Greek mythology; they were a way for humans to explain the world around them. Demons were thought to cause droughts, floods, and prayers were offered to the gods to keep misfortune at bay. Likewise, the gods were believed to favor your harvest or bless you with a good haul of fish if they were appeased.

The older and more ritualistic form of kagura, known as mikagura, is still performed to this day at special places of importance, such as the Imperial Court, by shrine maidens who are said to be descended from the goddess Ame-no-Uzume. The more theatrical offshoot is known as sato kagura (village kagura) and is a staple in local communities in regions of Japan like Shimane and Hiroshima prefectures.

Arguably, the most popular of these village styles is Iwami Kagura, which originated in a part of western Shimane formerly known as Iwami and is said to date back to the Muromachi period (1336–1573). In towns from the Iwami region like Tsuwano, Masuda, and Hamada, children typically begin formal training in kagura around 12 years of age. Their immersion into this theatrical world, however, begins before they can even walk as they attend weekly rehearsals with their fathers and older siblings as toddlers. Like sports in some communities, or certain arts and crafts in others, kagura is the glue that binds these communities together and it is in small-town rehearsal rooms where these theatrical traditions are passed down from one generation to the next.

“Iwami Kagura is firmly rooted in Shimane,” says Mio Zaima, a Tsuwano school councillor and national-licensed tour guide in the region. “Despite aging and depopulation in these communities, the younger generation still shows great interest. The spirit of kagura is in all of us here.”

Village kagura performers are amateur in that they have other day jobs—firefighters, accountants, students, school teachers, and civil servants all act in kagura performances. But to the outsider, their performances are every bit as polished-looking as any professional theater troupe’s. The high energy dance routines and stunning costumes with elaborately detailed masks are what bring the stories of these Shinto myths and legends to life.

There is an old Japanese saying that aptly fits with how kagura props and accessories are made: “The gods dwell in the details.” Everything from the masks and the orochi body down to the finest details of the costumes, which can weigh up to 20kg, are painstakingly handcrafted. Colorful, elaborate designs accented with gold and silver thread can take more than a year to complete with a price tag upwards of 2 million yen.

Unlike noh masks that are carved from wood, most kagura masks are now made using the strongest paper in Japan, the UNESCO-listed sekishu washi, made locally in the region for over 1,300 years. “The lightweight yet strong properties of this paper make it the perfect material for the masks as kagura is intensely high-energy and lightweight masks make it easier for the performers to move around the stage,” explains self-taught master mask maker Katsuro Kakita. With his son Kenji Kakita from their Hamada atelier, he creates the vivid, striking, and sometimes haunting masks for many troupes in his local Shimane area as well as for Osaka’s new Iwami Kagura Naniwa theater.

It is from this same traditional paper that the fearsome orochi serpent is made just down the road from the Kakita mask studio in the Hamada workshop of Rinkichi Ueda, whose grandfather pioneered the design for the snake body over a century ago. The craftsman and his wife, who are both in their late 80s, make the serpent bodies by wrapping sekishu washi paper over carefully bent bamboo ribs. “This allows for the dynamic movement and flexibility that is needed in the orochi performance,” explains Ueda, whose serpents also feature in the new Osaka theater shows.

Mermaids of Mie
The Art of the Katana