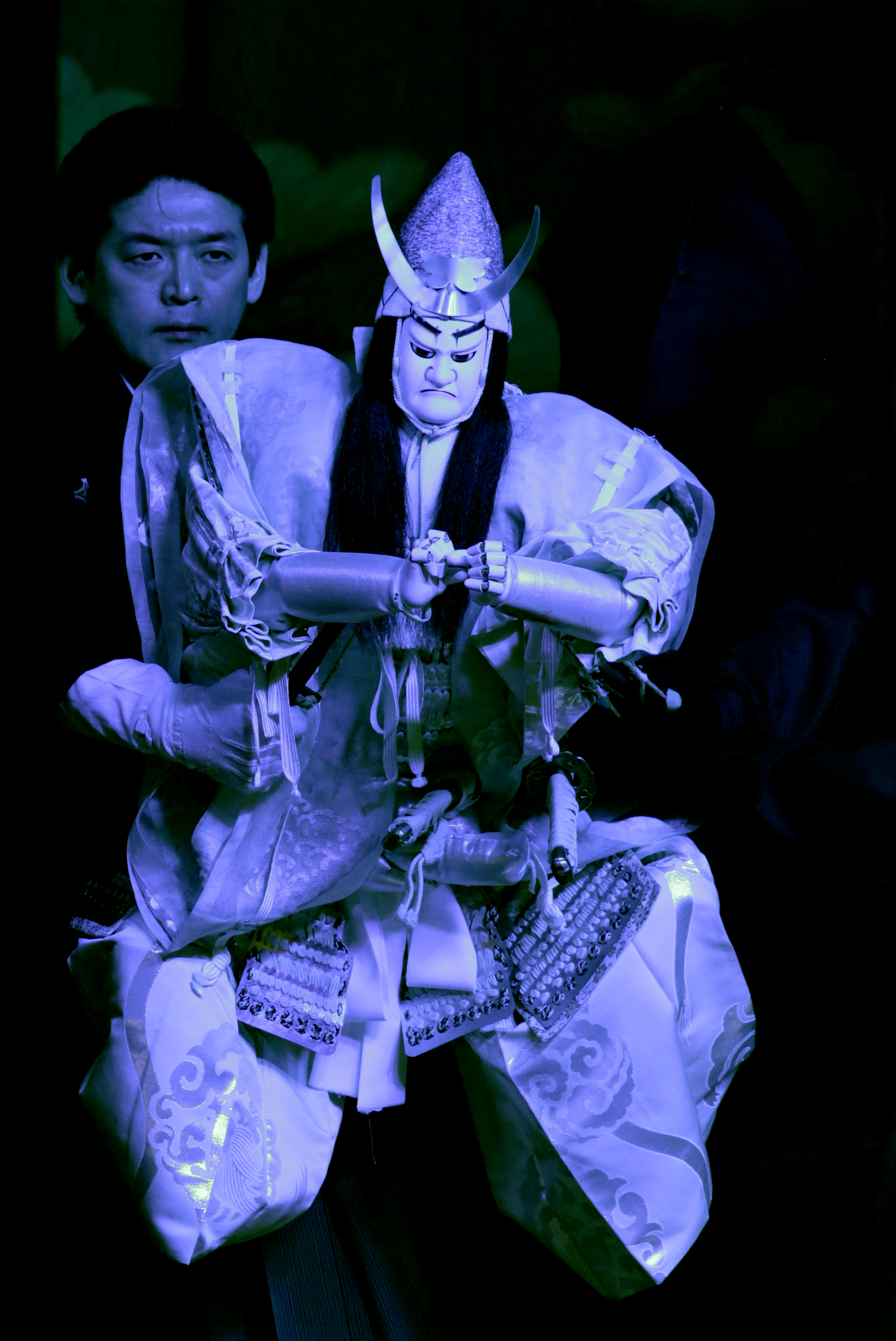 Aria Aoyama from the Japan Institute for Culture & International Exchange sat down with Yoshie Yamamoto from the acclaimed Yamamoto Noh Theater in Osaka to discuss Bunraku and its synergies with Noh.

Aoyama: Would you describe Bunraku as a form of sophisticated puppet theater for adults?

Yamamoto: Yes, I think that’s fairly close! I would say that if Noh (Japanese masked theater) was for the Gods, then Bunraku is its descendent, re-interpreted to be accessible to the common man.

A: So are you suggesting Bunraku shares its origins with the development of Noh?

Y: Yes and no. Historically, Noh was developed during the Muromachi period about 700 years ago. At the time, it was loved by feudal warlords such as Toyotomi Hideyoshi and Tokugawa Ieyasu, and later developed into the shikigaku of the shogunate—a form of entertainment that was always performed during formal ceremonies and special occasions. It was performed for the samurai class but always dedicated to the gods, as it is today. Noh was out of reach for the commoner, and for a long time—about 300 years—Noh remained closed off beyond the walls of power until…

A: Until, the Edo period of course, like everything else in recent Japanese history.

Y: Exactly. During the Edo period, warfare that had been ongoing for centuries finally came to an end, and Japan experienced a time of isolation, consolidation, and peace. As everything settled, people naturally came to seek entertainment in their daily lives, and that is when Bunraku and Kabuki were born as entertainment for the masses.

A: There seem to be some similar elements shared between each art—stories, characters, and set design, for example

Y: Yes. That’s right. Both Bunraku and Kabuki were heavily influenced by Noh, but each developed in its own right. Resemblances can be detected here and there but not always. It is actually quite fun to look into the other performing arts through the lens of Noh. It’s hard to generalize, as many Bunraku productions are not borrowed from Noh. But for the stories that are, they change form, and are re-interpreted, since they were intended for the masses and had to be adapted to be more accessible.

A: If I recall correctly, there was a story from the “Heike Monogatari” that was originally adapted for Noh, and Bunraku later took the story and created a sort of sequel.

Y: You are talking about the story of Samurai Taira no Tomomori. In the Noh play, Funa-Benkei (Benkei in a Boat) he appears as a vengeful spirit to attack Minamoto Yoshitsune who is escaping by boat. Yoshitsune fights back fiercely but since ghosts cannot be killed by sword, he struggles until Benkei—a loyal to Yoshitsune—starts praying and succeeds in banishing the ghost to the spirit world.

A: In Bunraku, the same Tomomori appears but as the master of an inn, instead of being a warlord.

Y: Indeed, the story goes that Tomomori didn’t die in the Battle of Dan-no-ura and becomes the master of an inn. He waits patiently, day after day, for the opportunity to seek revenge against Yoshitsune until one day he finds out that Yoshitsune is at sea, and Tomomori makes his way there to fight, but loses in the end.

After this version became highly popularised through Bunraku, the same story was then further adapted into a comical Rakugo version. Here, Tomomori appears as a husband who is caught by his wife fooling around on a ship during the cherry-blossom-viewing festival, and in surprise falls overboard. As he emerges from the water, he sings a song with the lyrics “I am the ghost of Taira no Tomomori…,” apparently eliciting rapturous laughter from the audience who appreciate the parody.

A: I wonder if such intelligent play and humor is something of the past…

Y: Well no, if you go to one of the plays—Noh, Bunraku, Kabuki, or Rakugo—it’s all right there, alive and kicking!

Where to see Bunraku

The National Bunraku Theater in the historical home of Bunraku in Osaka. Performances are usually held in three-week runs during January, April, June, July/August, and November. English audio-guides can be rented that provide some essential translation and background to each play.

Bunraku is a traditional form of puppet theater, also called ningyo-joruri. It combines narration, shamisen recital, and skillful puppetry into a mesmerizing art form, and was designated as an Intangible Cultural Heritage by UNESCO in 2003.

Groups of puppeteers are said to have existed as early as the Heian period (794–1185), but it was during the Edo period (1603–1868) in Osaka that it really flourished as an accessible form of storytelling for the common man. Stories often feature scenes and characters from Osaka’s colorful history.

In the early 19th century, Uemura Bunrakuken from Awaji Island established a joruri puppet theater called Bunraku-za in Osaka, and having outlived its competitors, Bunraku became synonymous with joruri puppetry as one of the representative performing arts of Osaka.

The beautiful, semi life-size puppets are manipulated by three puppeteers each—one main puppeteer and two assistants. One narrator voices all the characters in an impressive display of vocal acrobatics.

The Wrestlers Are Back in Town
Spring into Hanami Season