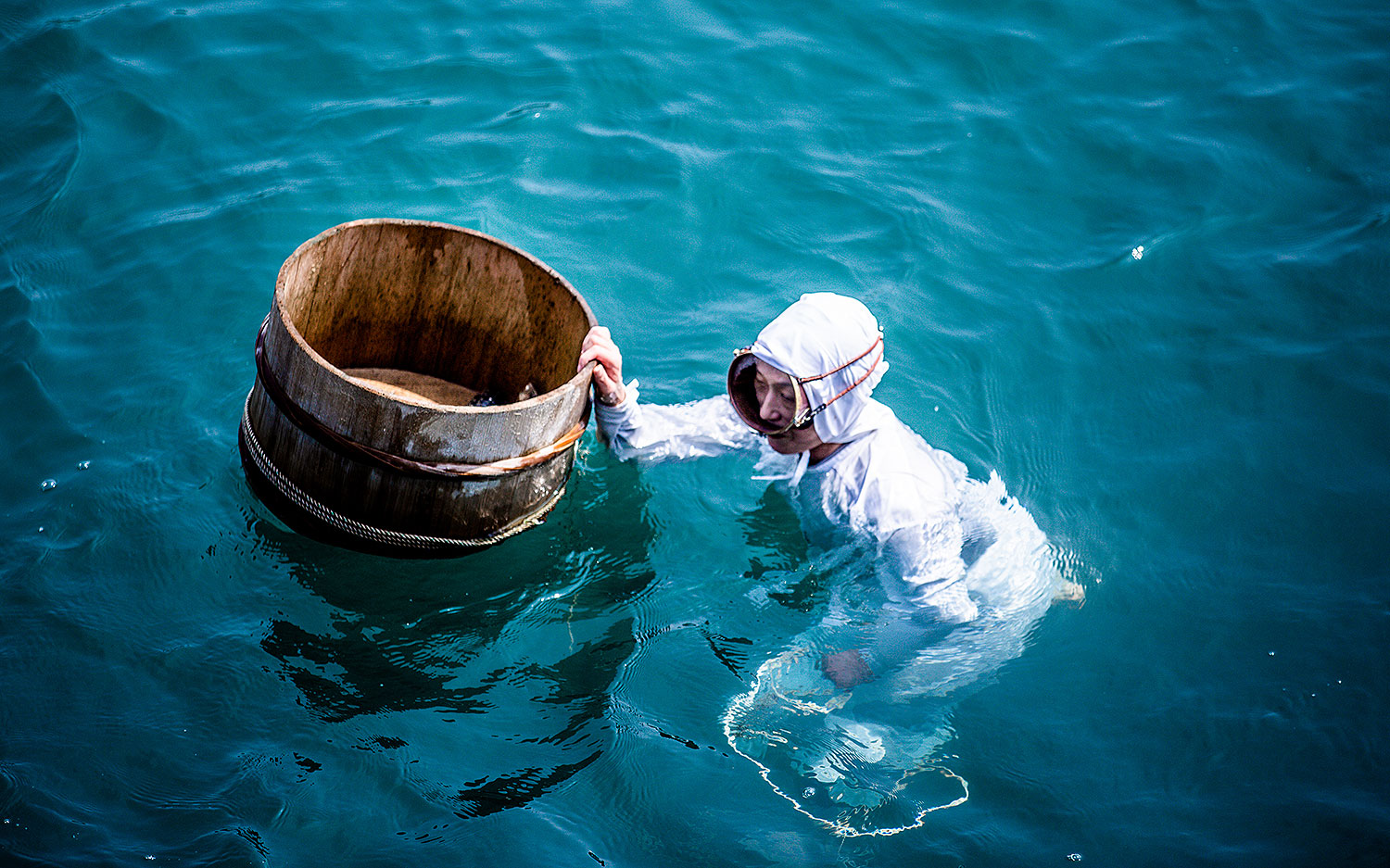 It’s mid-morning and Miyuki Taniguchi, a fresh-faced, sprightly woman in her early forties, is free-diving in the chilly blue-green waters off the Shima coast of Mie Prefecture. Clad in a black rubber wetsuit, a white headscarf, and a round face mask, white gloves cover her hands as she parts clumps of seaweed searching for tasty morsels like sea urchin, oysters, or a coveted abalone, which would bring her the most money at the market. The gloves protect her hands from the barbs of stingrays and the sharp teeth of ribboning moray eels.

“Everyone always asks about the sharks,” she says after popping to the surface for air a few feet from the boat, “but there are so many other creatures to beware of. The rays come closer to shore when giving birth and they birth their young in the seaweed. Moray eels hide between the rocks, lashing out to bite when disturbed.” Disgruntled sea creatures, freezing temperatures, and dangerous currents are par for the course for ama, the legendary women divers of Japan. Over the years, some have even lost their lives doing the job they love.

Taniguchi lets out a high-pitched whistle as she regulates her breath and prepares to disappear below the surface once more. The shrill echoes of the iso bue (sea whistle) have been carried on ocean winds for centuries in the rich waters surrounding Mie’s Toba and Shima districts. It is in this part of the country where the largest population of ama divers continue the long-held tradition of free-diving to the ocean floor to harvest shellfish and other delicacies. Remarkably, ama divers working today still forgo oxygen tanks, plunging to the bottom of the ocean on just a single breath. Their distinctive whistle helps them to keep track of one another and also reset their breathing after coming up for air. With all the elegance and finesse of a mermaid, her legs together and toes pointed, Taniguchi duck dives and vanishes, sometimes to nearly 10 meters deep, to scour the seabed for as long as her breath lasts.

It’s hard to pinpoint just how many thousands of years back this tradition goes, but the word “ama” appears in Manyoshu, the oldest anthology of Japanese poetry, compiled sometime around 759 AD. Many Westerners first learned of these Japanese mermaids in the years following World War II. Until this time, they wore nothing more than a loincloth, a diving mask, and a bandana to protect their heads during dives. Eventually, they began to cover up with all-white cloth outfits and ultimately, came to wear the black rubber wetsuits of today. It is said the reason women were initially better able to dive than men is that they have more subcutaneous fat to keep them warm under water.

Ama were once the lifeblood of coastal communities and have been practicing sustainable fishing for centuries, but climate change coupled with new fishing technologies and overfishing means their tradition faces an uncertain future. Today, only about 2,000 ama remain in Japan—at least 8,000 fewer than in their post-WWII heyday—with the largest group of them clustered in Mie Prefecture.

Back on shore at the airy wooden seaside hut of Satoumi-an at the southern end of the Shima Peninsula, veteran ama diver Miwako Ogawa ushers us inside to sit by the fire where she and Taniguchi would cook a meal of shellfish, squid, rice, and miso soup. Salt-licked huts like these were once an integral part of working ama life where the divers could rest and socialize between morning and afternoon dives. Today, they are where visitors to the region meet the ama and share a seafood lunch while hearing tales of ama life from the divers themselves.

At 72, independent and vivacious, Ogawa is proof that age is no obstacle for Japan’s free-diving fisherwomen. She started diving when she was 50 after the pearl farm she worked for fell on hard times. Her grandmother, mother, and two sisters are all ama divers who began working around age 16 after graduating from middle school. Ogawa often drove the boat for them when they went diving, so when her pearl farm employer started to struggle, her sisters taught her to dive. Before ama started wearing rubber wetsuits in the mid-1960s, they wore simple white cloth outfits and retired around age 60, but since the rubber wetsuits keep them much warmer, they can dive for many years longer. Ogawa wants to dive for as long as possible but says these days it’s hard to make a living as an ama, which is one reason why young Japanese aren’t interested in pursuing the tradition.

“When I first started, there were more shells, but they have been decreasing over the years,” she explains. “The number of abalone is especially falling. The seaweed arame is decreasing because of global warming—it’s what the abalone eat.” An abalone has to be at least 10cm by 6cm in size to be sold at the market—at this size, the divers know the abalone has reproduced at least once. Ogawa says that even though ama have always been careful not to deplete the ocean’s resources, the numbers of abalone and other shellfish have nonetheless declined drastically.

This is part of the multi-layered challenge facing Mie’s ama diving community. On the one hand, competition for shellfish is ever increasing, so the fewer the divers, the easier it is for the existing ones to make a decent living. However, diver numbers need to be maintained in order to uphold the long-lasting ama tradition. The women divers are also an important tourism draw for Mie Prefecture, another reason to keep it alive and pass it on to younger generations. It was once a given that a daughter would one day follow her mother out to sea—the ama tradition has been maintained through fishing families throughout the centuries. But in order to keep it going into the future, the community may have to find ways to attract women from outside the immediate network and bring them into the fold.

Miyuki Taniguchi is one such example. She was born and raised in Osaka and for many years, longed to change her lifestyle and become an ama diver. She dreamed of being part of a sisterhood, away from the bustle of city life, diving for treasures beneath the waves. However, because the ama society is linked through families, she thought her dream would remain just that. It wasn’t until she married a man from Osaka who also wanted to make a permanent move to the Mie region to work in the fishing industry that she thought that maybe her aspirations could be realized. It took two years of integration into the community before Taniguchi felt she could approach the head of the ama society to ask to become a trainee diver, but eventually, at around age 40, she took the plunge and was accepted. She has now been diving for three years alongside her sempai (senior divers who mentor her), and as she is fairly new to the trade, she is known as a “baby ama.”

For ladies like Taniguchi and Ogawa, ama diving is not mere work, but something they feel driven to do. As long as passionate women like these exist in this community, the sounds of the ama sea whistle will echo on in Mie for years to come.

How to experience Japan’s ama culture

Ama diver huts such as Satoumi-an in Shima and Ama Hut Hachiman in Toba provide the opportunity to enjoy fresh seafood prepared by traditional ama divers where you learn about their diving methods, history, and culture while you dine. Booking is usually required to eat a full meal with the divers. Otherwise, visitors are welcome to drop by.
amakoya.com