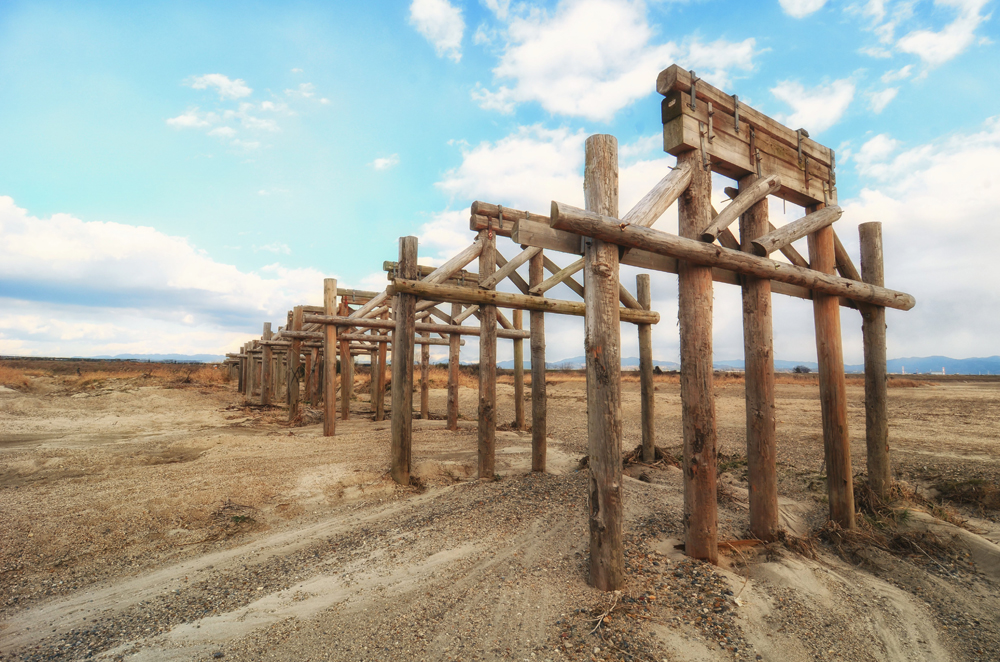 When a friend tried to describe Kozuya bridge to me, at first it was hard to fully comprehend precisely what they were going on about.
“They can take the top off it when the river gets high,” she told me.
“You mean like London’s Tower bridge? It raises up?” I responded.
“No, the wooden walkway lifts off when the water rises above it and can be pulled to the side to let the water flow through more easily.”
I was intrigued, if not a little confused. So one sunny afternoon, I checked a map, jumped on my bike and pedalled my way there.

When it first came into view, I had to ask myself if I was looking at a bridge or the skeletal remains of some enormous prehistoric creature that had keeled over long ago while attempting to cross the raging Kizu River.

Once I was up close, things started to make more sense. At approximately 350 metres, Kozuya bridge is one of the longest wooden bridges in Japan, second only to the 897-metre-long Horai bridge across the Ogawa river in Shimada, Shizuoka prefecture.

As the river floods, which happens several times a year when the water from heavy rainfall gushes down from the distant mountains, the bridge can become completely submerged. When this happens, the entire platform, which comprises eight sections, rises to the surface of the water.

Ropes attached to the sections are then used to pull them across to the riverbank, allowing the debris from the mountains to flow through the gaps between the bridge’s supports more easily, thereby alleviating the pressure on its structure. Once the water subsides, the platforms can once again be returned to their original position.

Despite its ancient appearance, the bridge, which connects Kumiyama-cho in Joyo city with Yawata city, was actually constructed as recently as 1953, a short time after a cross-river ferry service in the area was suspended. The prefectural government of the day had little money for an extravagant concrete or steel structure and so opted for the low-cost design you see today.

Kozuya bridge, popularly known as Nagare bashi (flowing bridge), is one of several of this type found in Japan today.

Pedestrians and cyclists can use the bridge to cross the river, though cars are not permitted. Its lack of sides and narrow width of just over three metres mean that even those on foot need to take a certain amount of care when using it. One strong gust of wind and you’ll be in the river rather than crossing it.

Unfortunately the bridge is currently out of action due to damage caused by a recent typhoon, but it’s still well worth taking a look.

When I visited, there was only a narrow channel of water running under the bridge, at the Kumiyama-cho end. On a warm day, the sandy riverbed attracts many visitors who come to enjoy the scenery and space. In fact, the barren view from the river-bed can make it hard to believe you’re in the urban conurbation that is Kansai.

There’s a small visitors centre about a five-minute stroll from the western end (Yawata City side) of the bridge. Walk down the gravel slope and you’ll soon come to it. Inside the centre you’ll find a section devoted to this wonderfully quaint structure, with photos and a video showing it during a flood. There’s also a small shop and restaurant close by.

The nearest train stations to Kozuya bridge are Yawatashi (Keihan main line) and Osumi (Gakkentoshi line). However, both stations are several miles from the bridge, so you’d be better off driving if you have a car, or making a day of it and cycling there along the pleasant riverside path.
[box]Getting there
From Osaka: Keihan line limited express to Hirakatashi, change to local to Yawatashi, then hike or cycle; or Tozai Gakkentoshi line to Osumi
From Kyoto: Keihan line to Yodo, Keihan Uji Kotsu bus to Sayama, Keihan bus Yawata Tanabe line to Hanakamituya; or Tozai Gakken toshi line to Osumi[/box]

Taipei: City of the senses
Train with a view