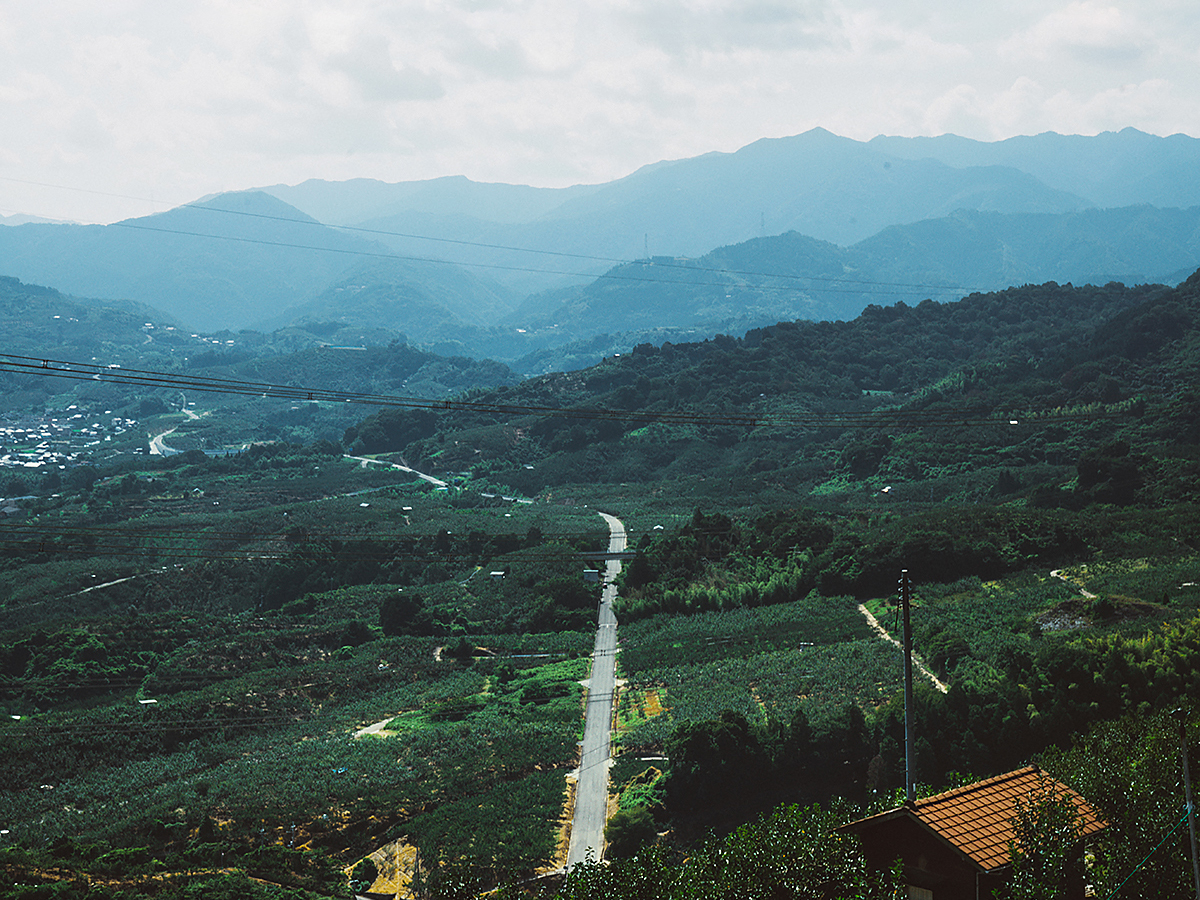 A man on the train has what I first think is a shinai martial arts sword in a cloth bag, but as I step closer I realize that it is a wooden staff. Walking away from Myoji Station, he tells me that he’s going to take the Choishi-michi stone stupa route up to Koya-san (Mt. Koya). He smiles as he says this, his eyes bright over his white Van dyke beard, giving him a stereotypical wizened look. I’m surprised, as it is now noon and he’s got a good seven hours of climbing ahead. I’m planning on following in his footsteps tomorrow, but today I’ll be walking the Mitani-zaka route, another trail that served as one of Mt. Koya’s seven gates.

The Choishi-michi received UNESCO World Heritage Status in 2004, and although Mitani-zaka didn’t join the list until 2016, it is older. It officially begins at Niusakadono Shrine, the “male” of a pair of shrines on this side of the mount. I’ll spend the next couple of hours getting to its “female” companion. I move upward through mikan citrus orchards, passing along the way a number of rock formations, including one long stone perched atop another like a propeller. This bizarre Kasa-ishi, along with the nearby sutra-bearing Hakotate-ishi, are remnants of Kobo Daishi’s own pilgrimage up the mountain.

Stonework suggests the teahouses that once lined the path. Mato-iwa is just off route, a stone cube emblazoned with two ancient Buddhas. I sit awhile in its quiet splendor, before a brief push over the pass to the female Niutsuhime Shrine, founded some 1,700 years ago to honor the female deity of the mountain. It was with the blessing of this deity that Kukai built the headquarters of the Buddhist Shingon sect, of which he was founder. The grounds are shaded by massive trees, led to by a tall, arched bridge. Around the side is a quiet grove that has tall stone stele commemorating important Shugendo mountain ascetics from nearby Mt. Omine, including the sect’s founder En-no-Gyoja.

I cross a sleepy village to the old hut that once served as hermitage for Saigyo, another Buddhist monk best known for penning waka (31-syllable verse). Though the hut has been rebuilt, the graves of his wife and daughter just below are certainly original. It is a lonely place, and I’ll pass another ancient grave as I climb to Futatsu-torii pass. True to its name, the two tall stone gates have been here since 1649, replacing older wooden ones erected by Kobo Daishi 800 years before. I rest in a covered shelter nearly, recharging with chocolate as I similarly feast on the scenery below. From here, it is all descent into the adjacent valley. Midway down, I meet the earlier pilgrim from the train, now dressed in white and striding strongly uphill with his staff.

I drop quickly down a set of steep switchbacks, passing a massive wild boar trap composed of thin cedar trunks, and open to the air like a corral. My descent continues through a pastoral, hillside village, then down to the Fudodani river, before I must climb again to the old station. I’m grateful for the benches and the vending machine as I wait for my train.

Born into a scholarly family on the island of Shikoku in 774, Kobo Daishi (also known as Kukai) is a beloved figure in Japan. As a young man he journeyed to China to study the teachings of esoteric Buddhism, which was centered around highly ritualistic practices that could only be passed on from teacher to student in a monasterial setting. After returning to Japan, he founded the Shingon School (“True Word”), establishing a headquarters on Mt. Koya, also the site of his mausoleum. He is also credited with inventing the kana script and establishing the popular 88-temple pilgrimage on Shikoku, where his legacy lives on in many a legend recounted along the way.

The following morning, I backtrack along the same rail line to Kudoyama, an old castle town associated with the Saneda samurai clan. The town’s main street takes me past a funky little coffee shop that sits at the edge of town, and whose views of the spreading rice fields make me envy the location. All is quiet at the early hour, as I bisect the low earthen walls to Jison-in Temple. As I am about to engage the friendly priest in conversation, my attention is pulled to all the breasts on display affixed to the ema prayer boards. Associated as it is with Kobo Daishi’s mother, the temple looks after the spiritual needs of women. Women were traditionally forbidden to climb Mt. Koya, so she reputedly visited her son here nine times a month, hence Kudoyama, “nine times mountain.”

A long staircase takes me past the first of the stone markers that give the Choishi-michi route its name. There are 216 of these between Jison-in and the Okuno-in, the resting place of Kobo Daishi on Mt. Koya, of which some 150 date to as early as the Kamakura period (1185-1333). They accompany me as I meander up through citrus orchards. Forms of Koya culture appear now and again, many with good English explanation about the exploits of Kobo Daishi. And of course, there are the ever-present stone markers. Somewhere around the 150 mark, two route runners come past. I hear their voices looming up from behind, and after a quick greeting, they disappear again into the trees.

I have my lunch at Futatsu-torii, under the same shelter as yesterday, then move on hypnotically along the ridgeline-tracing route, my sole companions the towering trees. It is almost startling to come upon a dozen hikers crowded around a picnic table, each older than 60. This jovial group proves generous with their snacks and their conversation.

The final hour is a pleasantly flat walk, until the route suddenly and steeply switchbacks upward, and I find myself beneath the towering gate that marks the edge of town. Stone marker Number One is a little further down the road, near the center of town. I’m relieved to find Bon On open, one of my favorite cafés in Japan. There are only two customers, an Italian researcher busy at his computer, and an older local playing classical guitar in the corner. I chat with the owner a little, then he joins the music on his cello. The Italian and I talk softly from our respective tables, and as the shadows lengthen outside, I hurry over to my temple lodging. While Buddhists find concepts such as time arbitrary, one must not be late for dinner.

Access: The Choishi-michi route starts at Kudoyama Station on the Nankai Koya Line and ends at Okuno-in. Rapid express trains departing Nankai Namba Station take approximately 1 hour. The walk takes between 6-7 hours. The Mitani-zaka route starts at Myoji Station on the JR Wakayama Line, and joins the Choishi-michi at Futatsu-torii. It is possible to shorten the route by starting from Kami-Kosawa or Hosokawa stations, also on the Nankai Koya Line.

From the Danjo Garan temple complex on Mt. Koya, take Nankai Rinkan Bus from nearby Kondo-mae stop, or Senju-in-bashi stop located in front of the Koyasan Tourist Association building, to Koyasan Station. A cable car links Koyasan Station to Gokurakubashi Station for the Nankai Koya Line train. From here it takes approximately 1 hour 30 minutes back to Namba Station.