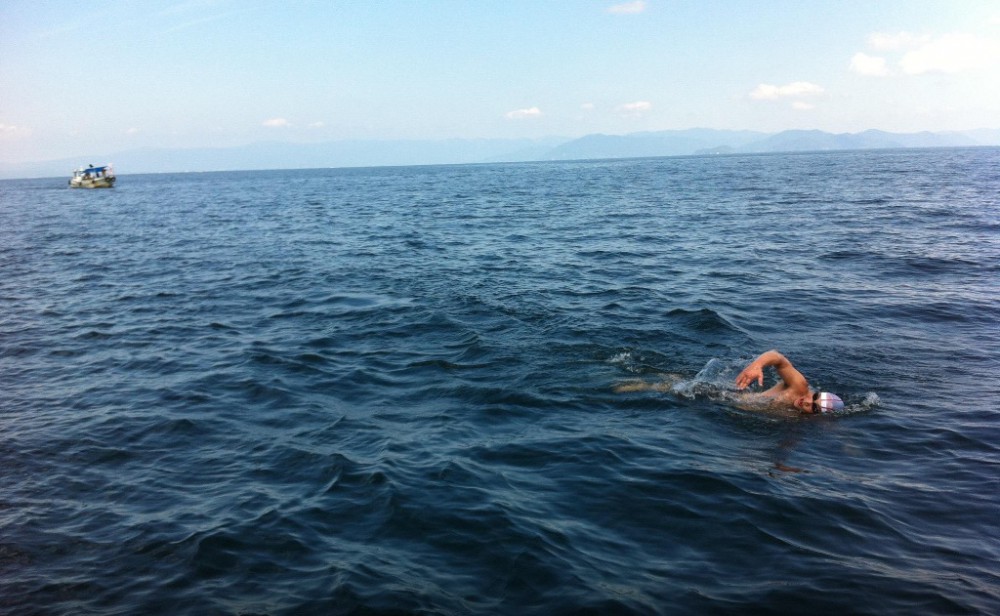 On the shores of Lake Biwa, just north of Omimaiko Beach, lies the start line of a swimming race. It’s a 16-kilometer, cross-lake marathon. Each team comprises six swimmers, a commercial fishing boat and a crew of helping hands.

This year was the 17th time the race was swum, and our team was entering as the 5-time defending champions.

The race is an annual event. It starts at 8am on the last Sunday of August. It takes a little under four hours for the faster teams to finish, with each member swimming for 30 minutes.

Our team headed off for the race briefing in Hikone shortly before 5am. After the briefing and Rajio Taiso warm-up exercises, all ten teams climbed onto the fishing boats and sped to the other side of the lake.

This year’s event was a little more challenging than those of previous years. Windy conditions pounded meter-high swells into the swimmers and gave the support crew a rollercoaster ride for the first hour. By the end of the race, we’d earned our complimentary curry and rice on the beach.

Why do it?
This is not just a swimming race. It’s a constant challenge to navigate yourself and your boat to the opposite shore. The currents within the lake mean the fastest team won’t necessarily be the winning team. It’s a continuous battle with the elements as well as your limits.

The solitude to be found out in the middle of the lake is something to behold. It’s just you and about 30 billion cubic meters of water and a spectacular view of the entire lake. Some of the spots we swam over were more than 80 meters deep. The water temperature is also a refreshing 30 degrees, so it’s better to be in the water than above it.

The competition is fierce but the camaraderie out on the lake is genuine. It’s also quite nice to win, too. After 3 hours, 56 minutes and 29 seconds, our team crossed the line in first place for the sixth consecutive year. Think you could snap our streak? Come to Biwa next August and try.

Event report: The Tantan Long Ride
Run to the hills