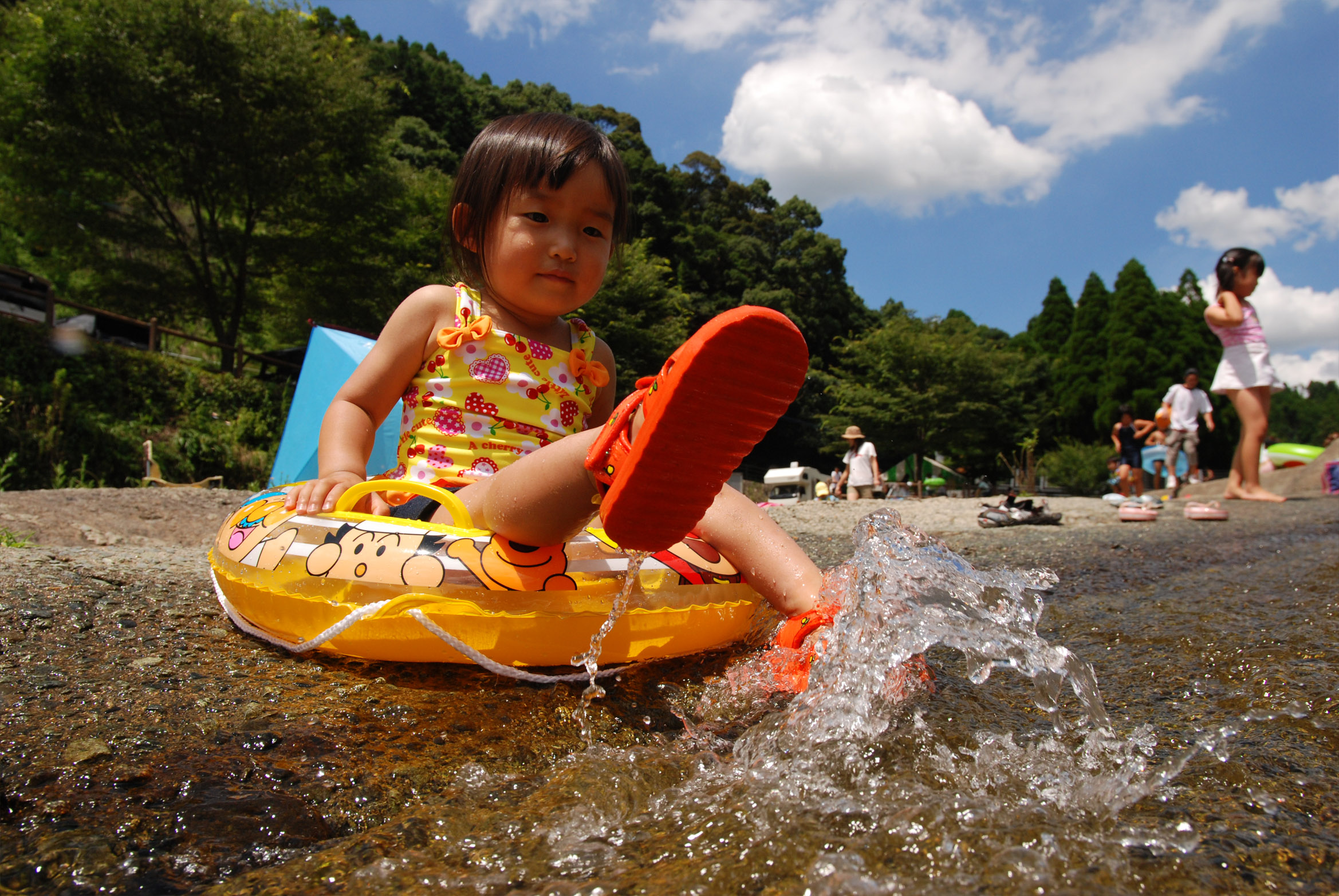 On a sweltering Kansai summer day, is there anything more enticing than an ice-cold dip in the great outdoors? We don’t think so, which is why we’ve sourced the best, and most convenient, places to cool off while surrounded by mother nature. Here, in no particular order, are Kansai’s “divine nine” swimming rivers. Grab your bathers, and we’ll see you there.

Kobe’s best kept secret is a heavenly oasis that happens to be bang in the middle of the city just behind JR Shin Kobe station. As well as plenty of shaded areas and a few jumping rocks, there’s enough space to set up a barbecue or to simply kick back and forget about the hustle and bustle of the city below.

Access: Exit Shin Kobe station and follow the small road that goes under the station towards the hill. This road soon becomes a path that will get you there in 20 minutes.

It may sound like a big deal, but putting in just a little effort in busing to Takihata Dam is guaranteed to pay dividends: breathtaking views of the surrounding Kii peninsula and pristine swimming spots that are perfect for both kids and adults. Set up camp at the shallows and enjoy the gentle flow of crystal clear water that trickles down from the mountains.

Access: Take the Nankai Koya or the Kintetsu Nagano line to Kawachi-Nagano station. From there hop on a Takihata Community bus headed for Takihata Dam. Alight at the bus terminal and then walk 15 minutes following the river upstream.

Another city spot, Yase in Kyoto’s northeastern quarter is both easily accessible and great for families in the mood for fun. Walking down the steps from Yase Hieizanguchi station will bring you to a pristine nature spot boasting leafy trees and clear, flowing water. The pebbled banks offer enough room to lounge and barbecue while the shallow water means that kids can be left to their own devices. If you want to get the most out of this spot, KS strongly advises putting your towel down early as it gets busy!

Access: From Kawaramachi, take the short walk to Gion-Shijo station and take a limited express on the Keihan line to Demachiyanagi station. Transfer here, taking the Eizan Dentetsu to Yase Hieizanguchi station. 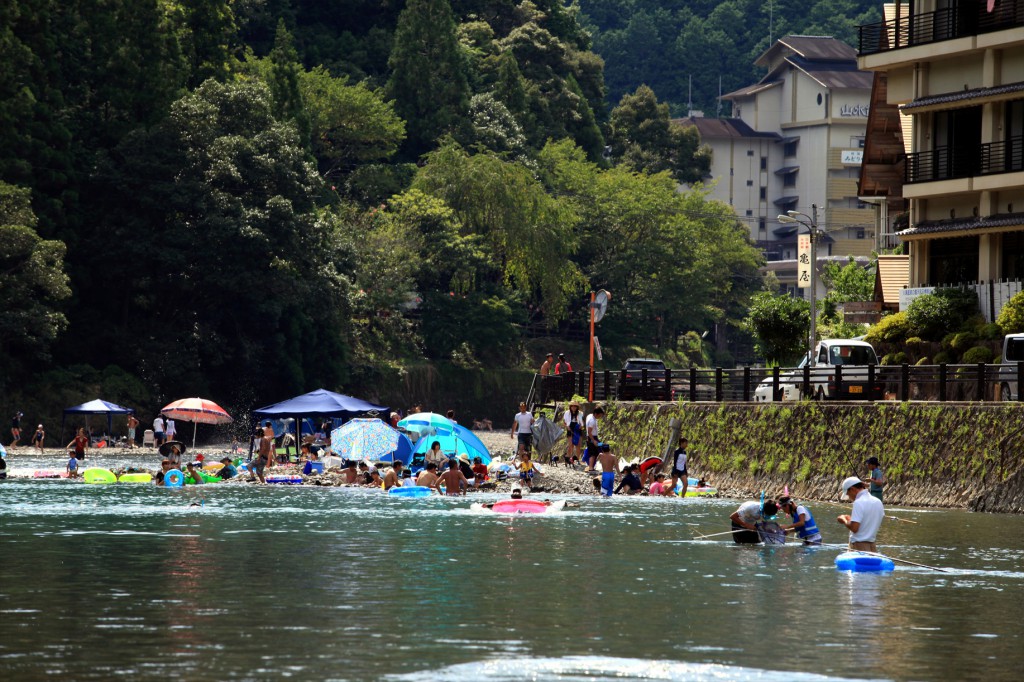 Kawayu Onsen in Wakayama is a popular summer swimming spot

For fun seekers in the mood for a more traditional Japanese experience, nothing beats this geothermal wonder where hot water rises from deep underground into the pebble banks of an emerald green river. In winter you can even dig your own onsen in the riverbed. It’s a bit of a trek from the cities so it might be an idea to stay at one of the onsen resorts which, although costing up to ¥15,000 per person per night, offer the genuine Japanese experience with superb meals included.

The quaint village of Tenkawamura in Nara’s Yoshino region is well known for its water; being home to the famous Dorrogawa “rumbling water” springs and Tenkawa Dai-Benzaiten, which enshrines the god of water. The river here is gentle, clear and snakes through the majestic Kii mountain range to provide swimmers with some of the best scenery in all of Japan.

Access: From Abenobashi station (Tennoji), board a limited express train on the Kintetsu Yoshino line to Shimoichiguchi station and from there it’s one hour on a Nara Kotsu bus to Tenkawa Kawai.

Bordering Wakayama and Mie prefectures on the southern tip of Nara, this place is simply idyllic. With lush, majestic mountains rising up on either bank, the emerald river sparkles during summer as the sun shines on its surface. After taking a dip in the river’s mellow currents, hike a short way up the mountain path to cross the Tanize bridge, which stretches over the river. At 297 metres, it’s the longest suspension bridge in Japan, so you’ll have one to tell your friends.

Lying up in the hills of north Kyoto, this river is a far cry from the touristpacked streets of the city. The currents up here are gentle as the river winds through the hillside, its rugged banks consisting of boulders big enough to accommodate family-sized picnic blankets. Although narrow, the river is great for a paddle and in some areas is deep enough for an invigorating plunge. After a well-deserved dip, it’s worth checking out the picturesque village just a short walk up the road.

Access: From Gion-Shijo station, take a limited express on the Keihan line to Demachiyanagi. Transfer here to the Eizan Dentetsu line to Taragaike and then transfer again to the Eizan Dentetsu- Kurama line. Alight at Kibuneguchi and follow the road, which travels parallel to the river going upstream into Kibune village.

Way out in western Hyogo, the town of Tatsuno, affectionately referred to as “the little Kyoto of Harima”, is rich in history and natural beauty. The town’s river, the Ibogawa, is one of the longest in Hyogo, its blue waters flowing down from the nearby Mount Keiro making for one of the most pleasant swim spots in the region. Take a blanket and picnic here while the kids have fun in the wide but benevolent currents.

Access: From Himeji take the Kishin line to Hon-Tatsuno station. From here, walk east to the Izumo highway and then follow this until you hit the river bank.

Kyoto’s most famous river, which flows right through the middle of the city, probably wouldn’t come to mind as an ideal swimming spot. However, further upstream, about 1 kilometre north of Kamigamo Shrine, there’s a beautiful stretch of river that’s perfect for paddling and picnics with Kyoto locals and (probably rather tipsy) university students. Again, this one can get crowded so be sure to arrive early!

Access: From Demachi-Yanagi station board the City Bus number 4 and get off at the last stop, Kamigamojinja-mae. From here walk north along the river for 10 minutes until you smell barbecue.

Paradise beneath the waves: Diving in Wakayama
Pick of the bunch