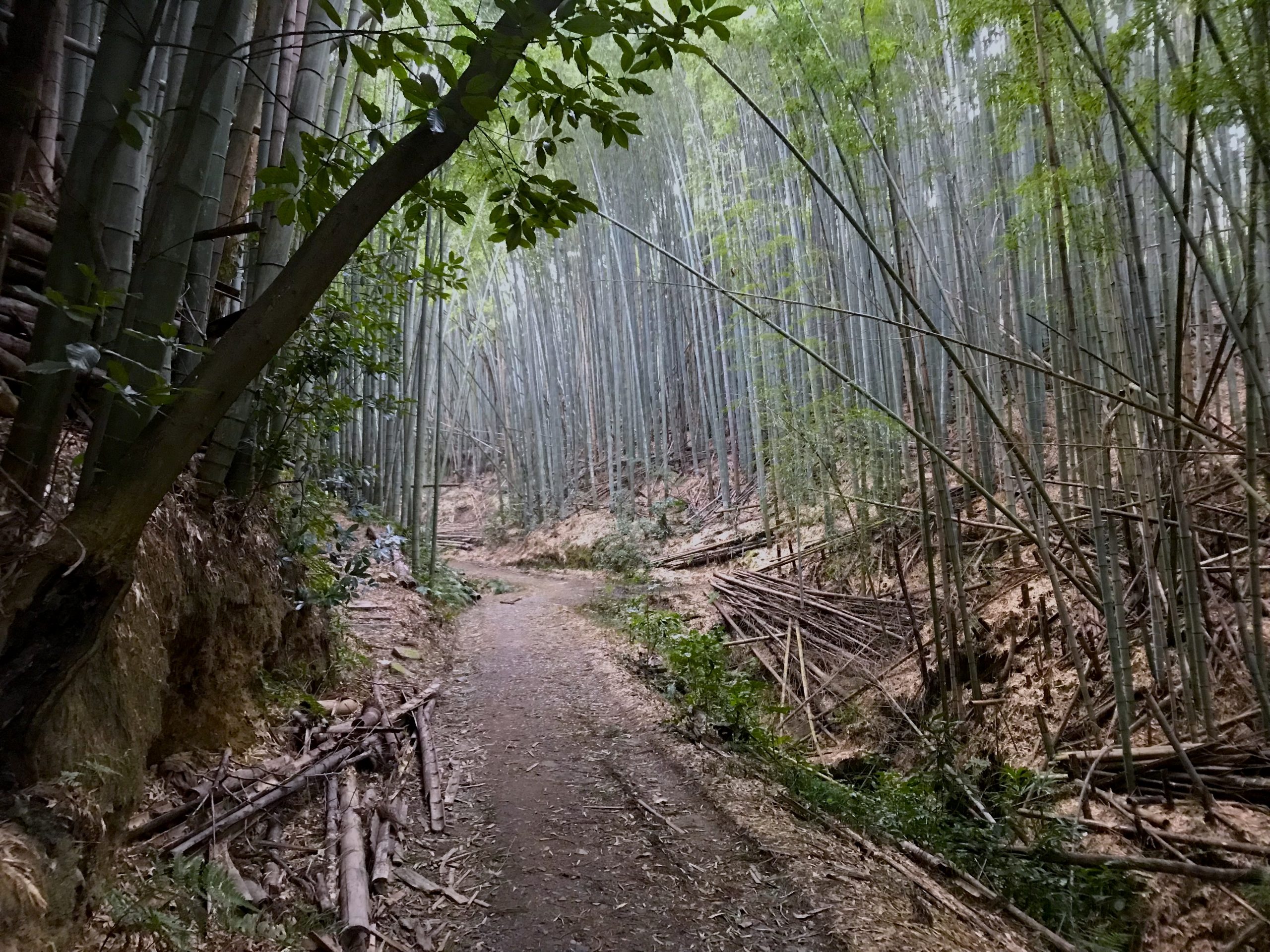 Many visitors to Kyoto’s southern Fukakusa area will visit its star attraction, Fushimi Inari Shrine, and know not of neighbouring Mt. Oiwa and its gem of a hike. Surrounded by tranquil forest, its shrine, Oiwa Shrine, has been abandoned since 2015 and fallen a little into disrepair, yet also holds a sense of mystery for those looking for adventure over a touristic stroll.

Mt. Oiwa is also known as Mt. Mikakusa (Honorable Grass), a title earned after grass from the mountain was fed the horses of the first Tokugawa Shogun, Ieyasu, when he visited Kyoto in the early 17th century.

Oiwa Shrine was founded by the Kii clan, having been forced to move turf by the incumbent Hata clan, who had established a shrine of their own at Fushimi Inari in the year 711.  Mt Oiwa therefore became the place of worship for generations of their family.

During the Onin War (1467-1477) the shrine was damaged by fire, with restoration didn’t happen until Meiji times in the late 19th century when the Kubo family set about the task.

The hiking route for the most part is well-maintained and safe. The path at the foot of the mountain is lined with bamboo, and clear paths are visible all the way to the top.

It is not long before further signs of Oiwa Shrine become visible. The torii gates, stone and wooden, are dotted along the route, the first at the entrance situated at the base of Mt. Oiwa and the second about ten minutes along the trail. There are some brooks running down the mountain, and log bridges have been put in place where these cut through the hiking route. The area is also of interest to nature lovers. A signboard on the way up highlights some plants that can be found growing wild in the woods. The sound of birds in the trees is ever present and there are also a number of signs with the message ‘Beware of Mamushi’ (viper snake). Mamushi tend to hunt small rodents such as mice or rats. On the rare occasion that a hiker is bitten, it’s usually because they trod on the snake, so watch your footing!

Over the log bridge, the path continues a little way before coming to a point on the trail worth a few minutes pause for reflection. The pond is said to be called Shirahime Ryujin O Kami which in a literal translation is ‘White Princess Dragon God’.

The shrine has been known for its reputed power to heal serious ailments. An interesting piece of trivia about this shrine is one of its past patrons happens to be the renowned Kyoto artist, Domoto Insho. Domoto donated two large sculpted stone torii having prayed here for the health of his sick mother. He donated the first in 1952, when his mother was still alive, and the second in 1963 after her death. More of Domoto’s work can be found at the Kyoto Prefectural Domoto Insho Museum of Fine Arts in the Kita Ward of Kyoto.

Once through the stone Torii of Domoto Insho and a little time to look around, steps to the left lead further up the mountain towards another stone torii gate. As you ascend the stone steps you see guardian foxes, the same as can be found at Fushimi Inari Taisha standing proudly to attention as if on guard.

Once at the top of these stairs and through the torii gate you’ll come to further steps leading to another stone torii ahead and to the left.

After climbing these steps, the path continues on past the torii. From here it eventually begins to zig-zag and climb up towards the top of the mountain until a red wooden torii comes into view at the end of the path.

Follow this path, through the torii and turn right. You’ll be faced with another set of stone steps which lead up to the top and the Oiwa Shrine buildings. The exit from the shrine is through a second but smaller stone torii designed by Domoto Insho .

At the top of the steps beyond Domoto Insho’s torii, the path out of Oiwa Shrine leads past stone lanterns and a final large stone torii gate. From here, the road leads either to the left down the mountain or right towards the mountaintop viewing area. Here you will be able to enjoy a fantastic panoramic view of Kyoto. Noticeable is Fushimi Momoyama Castle.

To return to the bottom of the mountain, either follow the roads or retrace your steps back down the wooded mountain path.

Runner’s Info x Kansai Scene: On the Trail with the God of Running