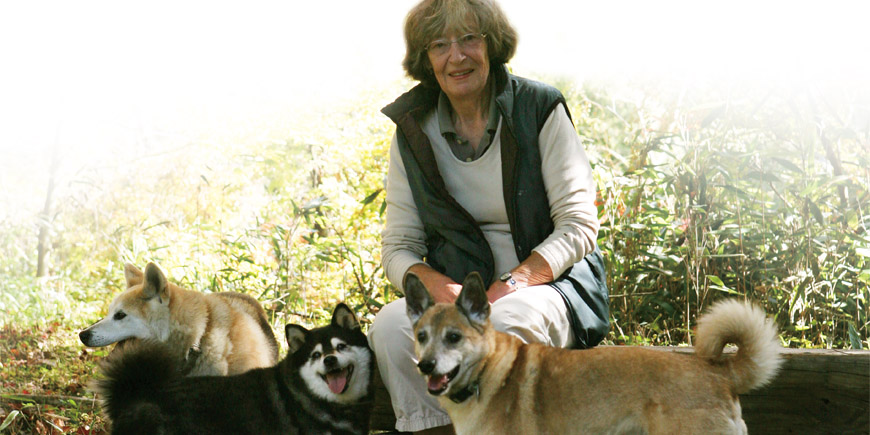 At our best, humans can provide everything for an animal—shelter, food, warmth, and love. At our worst, humans can deny them everything. Under or over feed them. Treat them as toys, only to be played with when we feel like it, or simply money-making puppy machines. Kick them out when they become too big, too noisy, too difficult to handle.

Animal welfare is slowly improving in some parts of the world, but it takes a lot of time, energy and passion for the cause to make these changes happen. Here in Japan, dogs and cats are usually bought from tiny-caged pet shops. You’ve seen them, in almost every city—the glass-fronted shops where puppies and kittens have barely enough space to snooze, their faces often turned eagerly towards yours through the glass, hopeful for an owner.

The luckiest ones bought from these shops have a caring family for life. As for the unlucky, they’re either badly kept, “thrown out”—abandoned—or sent to the hokenjo, the city pound. Sometimes, they get adopted from the pound, or claimed within a week. If not, they’re gassed. That’s the sad fate of some 300,000 animals every year.

Thanks to the dedication and determination of one British ex-pat, abandoned and mistreated animals do have another future. They have a chance to be fed, groomed and nursed into good health by caring humans. They have a chance to find a new family, with no time limit at all put on their lives, and no more glass boxes.

Animal Rescue Kansai, or ARK, is the lifework of Elizabeth Oliver, MBE. ARK has rescued and rehomed thousands of animals, and shows no signs of slowing in its aims to improve animal welfare nationwide.

Yet ironically, Elizabeth didn’t even plan on coming to Japan in the beginning. She set out from the UK in 1965 intending to travel to Mongolia and Tibet. But a chance meeting with a Japanese man, a friend of a friend, left her with a Japanese meishi in hand. “Cutting a long story short, I had to abandon plans to visit Mongolia because of train problems,” she said. “Instead I travelled to south China and then Hong Kong. There I found a cargo ship bound for Kobe so decided to take it.” She called the Japanese friend, and was welcomed to Kansai warmly.

Elizabeth first became a teacher in Osaka, but found city life too claustrophobic, and moved out into the mountainous Nose area to restore a farmhouse that she still lives in today, with seven dogs and three cats. She said: “My early days were a lot of fun. I had everything I had ever wanted, an easy job, enough money to travel, many friends, a house in the country and animals. But I felt in a sense my life wasn’t complete. I needed a cause to work for.”

An animal lover from an early age— she had a pony at age 7—her cause soon became abandoned animals. At first she began rescuing animals on a small scale, working at a university and using her salary to pay for their food and vet bills. “I realized that working 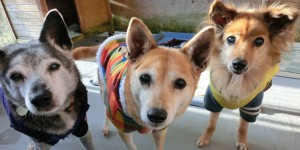 • ARK Nose: home to 180 dogs and 180 cats, run by 30 staff. This is where rescued animals are sheltered, cared for and eventually adopted. Elizabeth also lives on site and holds lectures and workshops.
• ARK Tokyo: An administrative office set up for people looking to adopt an animal.
• ARK Sasayama: currently being built. This covers 7,000 tsubo of flat land and will feature a warehouse, training and education centre, staff facilities, kennels and a cattery, as well as DogLand, an open space that will welcome pet owners for special events.

as an individual had limitations and I needed more support,” she said. “So I decided to set up ARK in order to get members and supporters and more money. In the beginning I worked together with friends and volunteers but these people only came when they were free. In order to look after a growing number of animals, we needed regular staff. But if you have staff, you need to pay their salaries and hence more money.”

The biggest growth spurt for ARK was caused by the Great Hanshin Earthquake in 1995. From a small but slowly growing organization, it had to triple overnight, taking in 600 animals who lost their homes or families in the disaster. ARK suddenly needed more volunteers, more space, and more staff to help out. It became a registered NPO, constantly needing donations and support from businesses and individuals.

Of course the human cost of natural disasters is devastating; but little is known or reported about the effect on animals in the same region. In Tohoku, farm animals and family pets led a relatively comfortable life until the earthquake, tsunami and nuclear leak that followed. Those that survived these disasters faced dehydration, starvation and even cannibalism. ARK staff visited the Fukushima area and rescued 200 animals, neutering some 638 more to prevent thousands more feral animals being born.

Animals that have been abandoned aren’t the only ones to find a home at ARK. Elizabeth actively looks for animals being kept in cruel captivity, and challenges those who are doing it. ARK has investigated and prosecuted those that mistreat animals, including a yakuza breeding ring in Saga prefecture. Once these gangster guys might have dealt in drugs or women, now they keep dogs—often in filthy and tiny apartments—and sell their weekold puppies to pet shops.

Elizabeth has been physically threatened and even arrested for trying to find out the truth and rescue some of the animals involved, but she refuses to be intimidated or silenced. She spreads information through media interviews, ARK’s website and active social media channels on Facebook and twitter.

It’s this courage, steely determination and dedication to helping animals for the past 24 years that earned her one of England’s highest honors, an MBE in 2012.

“At the time I was involved with this ongoing yakuza case, so when I got a call from the British Ambassador I thought, uh-oh, maybe I’m being asked to get out of Japan,” she remembered. “When they told me I was getting an MBE, I said, ‘Wow. Let me sit down and have a drink!’”

The MBE has brought more media attention to ARK, but it’s a tough ongoing job to raise money and awareness about the plight of animals. When she first set up ARK, Elizabeth used to spend a lot more time personally with hands-on animal rescue and care. But these days, as she’s in her seventies, she’s more involved with administration, promotional work including lectures, and writing books about her experiences with ARK.

Every day she gets up at 6:30am to walk her own dogs, and gets ready to welcome the ARK staff at 7:30am. A morning meeting is held to discuss animals coming in or going out to new homes, and any jobs or volunteers there that day. On Wednesdays, she usually heads to Sasayama, where a new ARK facility is slowly taking shape.

The new facility will include a training and education centre, something that’s key to Elizabeth’s hopes for the future of animal welfare. “Education is key,” she said. “The media in Japan often focus on the cute side of owning a pet, they don’t emphasise the responsibility it also involves. They don’t talk about how different animals are suitable for different people. They don’t report on the real truth behind puppies sold in pet shops.”

If more people were made aware of the facts, they would surely shun the pet shops and come to a place like ARK instead to adopt an animal. It seems like an overwhelming task to try and change the mindset of a nation, but Elizabeth doesn’t give up easily. She refers to the success of places like Battersea Cats & Dogs Home in the UK, which has been rescuing and rehoming animals for 150 years.

“Of course I want ARK to continue and grow like that,” Elizabeth said. “In the future, I hope that animal welfare in Japan can be brought up to international standards, in particular the control of the pet business, breeders and so on. Also that cruelty is taken more seriously and addressed.”

On January 6th 2014, Hyogo prefectural police set up an animal abuse hotline, the first in Japan—so steps are being made in the right direction.

Elizabeth still visits the UK once or twice a year now, but her home and her heart are very definitely here in Kansai—among the thousands of four-legged lives she has helped to save. That’s one hell of a legacy in any country.

How you can help ARK

Adopt a pet
If you can give a safe and loving home to one of ARK’s animals, check the website or Facebook page to learn more about the animals looking for new homes, and the procedure.
facebook.com/pages/Animal- Refuge-Kansai-ARK

Donate time
ARK Nose is always looking for volunteers to walk dogs, play with cats, clean out kennels, and help groom animals. Even if you have no real pet experience, or can only visit once a month, the animals and staff there will welcome you. People skilled in gardening, maintenance, and photography are always needed to help with specific tasks on site. A small dormitory is available for those wanting to stay overnight and help.

Donate money
NPOs like ARK rely solely on donated money to keep running, so one-off donations, memberships or annual animal sponsorship are just a few of the options. Donate clothes When you’re looking to clear out your closet, donate your clothes, shoes and bags to Orange Thrifty in Kobe, as they raise funds for ARK.
kobe-haberdashery.com/ othriftyrokko/ot-e/otshop-e.html