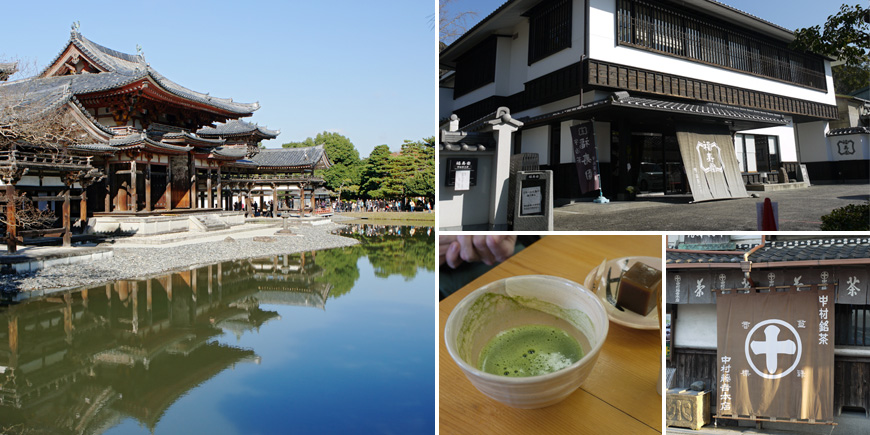 Starting from the north side of the River Uji, and following the narrow road that runs eastwards along the river, the first stop-off is the small but famous Ujigami Shrine.

This World Heritage shrine is dedicated to Crown Prince Uji no Wakiiratsuko and his father Emperor Ojin (late 4th century) as well as Ojin’s son Emperor Nintoku. Prince Waki-iratsuko is said to have drowned himself in the Uji River leaving elder brother Nintoku to take the throne.

The main honden or hall was built in the late Heian Period (11th century). The Kirihara-no-mizu spring within the shrine grounds is one of the seven Famous Waters of Uji, Uji shichi meisui. Just a little further down the road and by the river is Uji Shrine.

Until the Meiji Restoration of 1868, Uji shrine was part of Ujigami (lower and upper shrines). The main structure was built in the Kamakura Period (1185- 1333). It is thought that the shrine is built on the former site of the Kirihara no Higeta palace built by Prince Wakiiratsuko.

Have you ever had a bottle of Iemon tea? Well, it comes from Uji and is produced by the Fukujuen Tea Company, which is a short walk further along the river.

On the first floor is a gift shop and on the second a cafe and workshop where you can learn matcha tea making. Using a stone tea grinder to grind the tencha (tea leaves) into matcha tea powder this grinding period takes about 20 to 30 minutes. Grind fast for coarse bitter tea and slowly for finer sweet tea. Then enjoy drinking the matcha that you’ve just ground along with a piece of Japanese yoka sweet. The whole experience costs ¥1,050.

Leaving Fukujuen, cross the river to the south side via two small bridges and an island. Once across if you want to take a short river ride, you can catch a boat from here before visiting the Byodoin.

When it comes to eating and drinking, Uji has both the old and the new. The well-known Tokichi cafe has two locations, one close to Uji Bridge overlooking the river and the main restaurant across from JR Uji station. The tea manufacturer Nakamura Tokichi first opened it in 1859 at the current main establishment. While there are many wonderful dining establishments in Uji, a visit to this city is incomplete without going to Tokichi. But if you want something more modern, The Rockin’ Hearts Irish Pub opened its doors directly across from Uji JR station last October 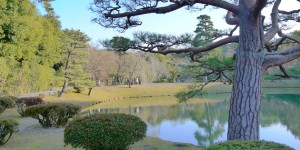 The World Heritage Byodoin will lift the covers on its lengthy restoration in April.

Originally built in 998 (Heian Period) as a rural villa for the high ranking courtier Minamoto no Shigenobu, it became a Buddhist temple in 1052. The famous Phoenix Hall—as pictured on ¥10 coins—was built in 1053. The temple and hall are surrounded by an impressive garden next to which is a small museum.

From Byodoin following the path towards Uji Bridge takes you along a street of shops selling teas and goods. A must-visit is the small shop called Wamuu—an old traditional Japanese store that has been in business since 1926. Following this street then brings you to Uji Bridge and the nearby stone statue of Murasaki Shikibu. 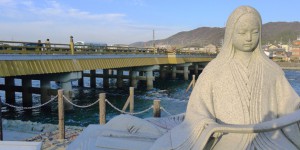 There has been a bridge here since the 7th century, with the first being erected in 640.

The bridge appears in many pieces of literature including The Tale of Genji and has been the scene of 12th and 13th century battles. It was from Uji Bridge that water was drawn from the river for the tea ceremony for Toyotomi Hideyoshi, though the current bridge was rebuilt in 1993.