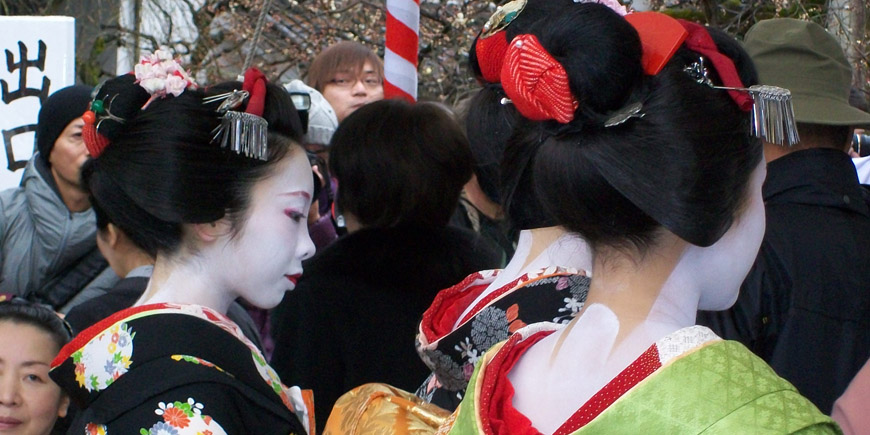 Many foreign residents in Japan savour the chance to taste the Japan that was: historical, classical, ancient, removed from the modern clamour of cellphones and the ubiquitous Kitty-chan. An event that embodies so much of the grace and elegance of Japan’s yesteryear is Baika-sai or the Plum Blossom Festival, held yearly on February 25 at Kitano Tenmangu Shrine in Kyoto. This is a most rare opportunity to experience one of the most endearing and enduring of Japan’s cultural icons— geisha —serving tea to the public in an exquisite outdoor tea ceremony. This event commemorates the death of Michizane Sugawara, a well-known scholar, politician, and plum-blossom aficionado in the Heian era. He was revered as a god of learning and scholastic study, so many students make the pilgrimage to the shrine to pray for success in their high school or university entrance exams. The festival has been held on the same day every year for about 900 years with the outdoor tea ceremony or nodate, being added in 1952. What makes this event so special is that it is hosted by approximately 30 geiko and maiko, geisha and apprentice geisha, respectively, from the local Kamishichiken area.

The only etiquette required for the ceremony is you must remove and carry your shoes. One can then sit and be served tableside or join the elite sitting on the covered ground where one gets a prime view of an actual tea-making by geisha. You will be served a bowl of hot whipped matcha green tea and small sweet cakes. Sitting among the blooming reds, pinks and whites of the ume plum blossoms while being served by dainty geisha in formal kimono and white make-up can make one understand the cultural concept of ichi-go ichi-e—one chance, one meeting—which is the feeling best associated with the tea ceremony. A superb Japan moment! 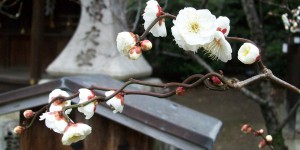 • When to go: The event has a religious service starting at the main shrine at 10am. The tea ceremony is from 10am–3pm.
• Tickets: Official advertising states advance tickets sold only at the shrine are required to participate in the nodate, with tickets going on sale for the first 3,000 people from January 25. But tickets, costing ¥1,500, are also sold on the day of the event and the lines are much shorter after 1pm.
• More fun: For total immersion in old Japan also on Feb 25, Kitano has their monthly flea market where one can buy silk kimono for a bargain price, admire antiques and purchase tasty street food as you shop.

Turn over an organic leaf
Refresh yourself with Uji