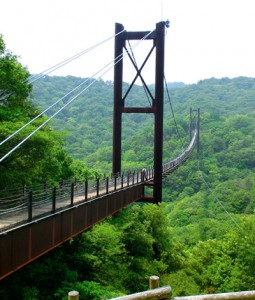 Some say as people get older they lose their sense of whimsy. Then again, some people have never seen an old lady in full hiking gear trying to steer a floating pink dinosaur. With paddle boats for hire and stalls selling ice cream, Kurondo-ike pond in Kurondo-Enchi park is likely the most popular destination for those walking in the Katano Hills with their kids and grandkids this summer.

Heading left out of Kisaichi Station there is a path making its way to Kurondo- Enchi. This features forest trails running off through the hills in various directions, a barbecue area, a raised walkway over some swampy ground where bald cypress trees grow, and a small but tranquil water lily pond. 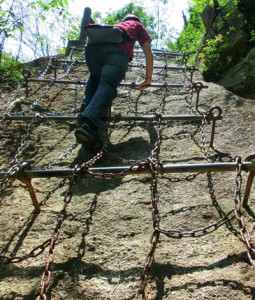 Near Kurondo-ike, a giant boulder can be scrambled up by means of a chain ladder. This provides a rare chance to feel like an intrepid mountaineer attempting to ascend the north face of the Swiss Eiger – at least up to the moment when a seven-year-old clambers past, video game in hand.

The Katano Hills is also a wilderness for people whose junglecraft extends to making careful use of the sun to calculate whether it is day or night. For those in search of something slightly more rugged, there are fine views to be had from the top of Konosan, a kilometer or two to the north of Kurondo- Enchi. The mountain makes visitors work for it though, forcing them up a seemingly endless series of steps.

Those who make it to the summit find a couple of monumental boulders, from atop which they get a sweeping view: Kyoto, Kuzuha, Takatsuki, Osaka – all the glass, steel and concrete they climbed so hard to get away from. Yet somehow even the utterly mundane can be awe-inspiring if seen from an unconventional angle.

If you turn right out of Kisaichi Station, the Hoshida Park hiking trail awaits – the most popular trail in Katano. It begins by following the Amanogawa River and then leads up to Takeruga Peak, a scenic peak of bare rocks. From there, the hike goes up the hill through the forest. The trails are wide and easy and for the most part not too steep. The nature along the trail is pretty and once you reach the top, the park’s central attraction is waiting, the Hoshi no Buranko suspension bridge – 200m long, 50m high, and linking anonymous hill A with anonymous hill B. It is hard to say whether the bridge is more breathtaking in its epic scale or epic pointlessness, but nevertheless it is an interesting walk across.

Hikers traipse over the same kind of wooden planks that seem to rot and snap so easily in Indiana Jones films. The superstructure itself, however, is made of steel – so if a plank does happen to give way, the unlucky trekker can plummet earthwards secure in the knowledge that the bridge itself will be quite all right.

For those who do make it across, the view of the surrounding mountains and valley below makes for a most scenic experience.

The Feasts and Fortunes of Glitzy Kitashinchi
Conjuring the Supernatural