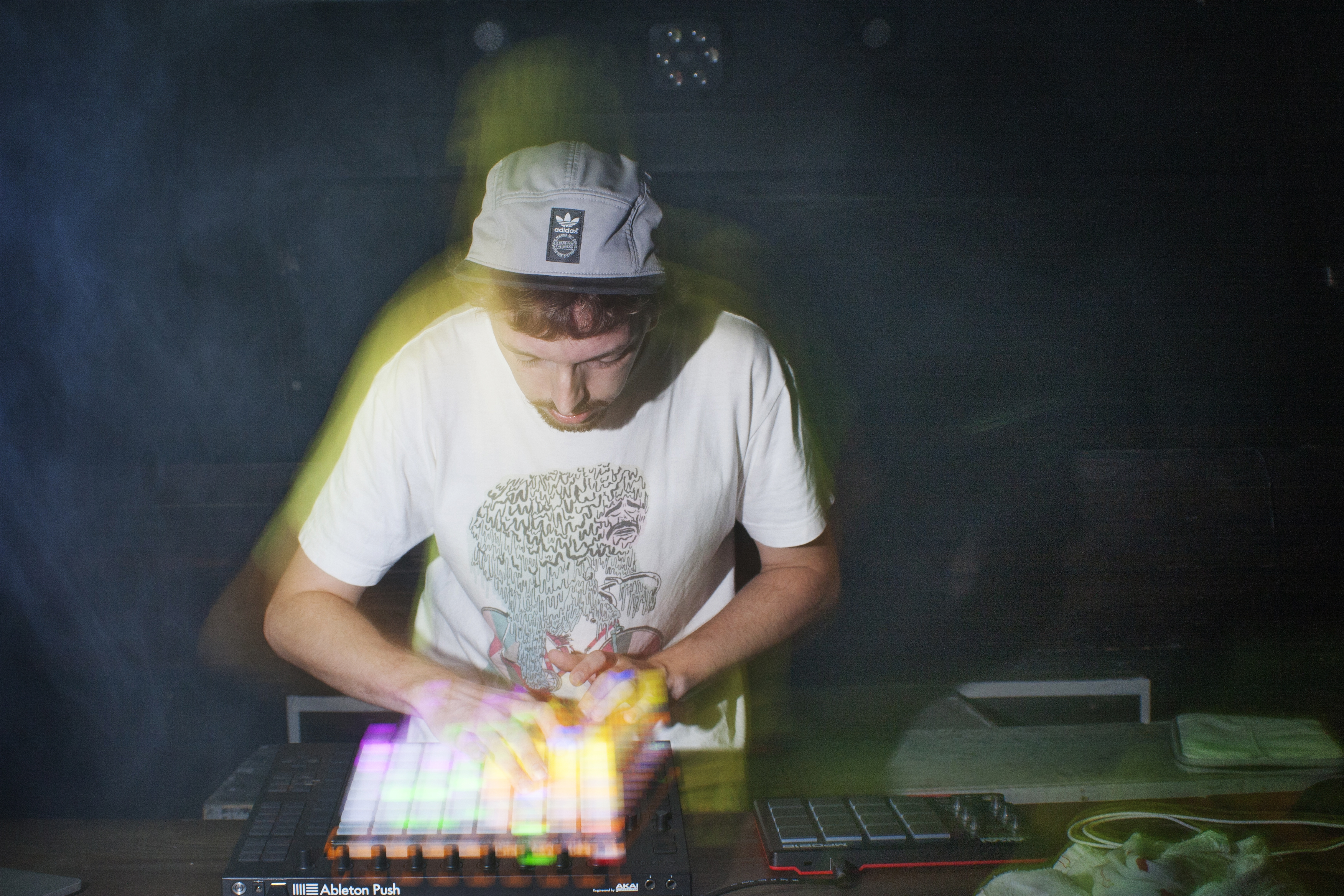 Picture yourself wandering by the shore of a lake on a cold winter’s day, chasing a flock of seagulls into the air, jumping into mounds of snow and then walking a little further inland to throw rocks into half-frozen streams.

Now – using the flutter of bird wings, the crunch of snow underfoot, and the splash of water as you break its surface – make some music. If these don’t suffice, try adding in the rattle of a metal fence or the twang of some thick elastic.

You’d be forgiven for thinking that any tune made from these sounds would materialize as a little clunky; a combination of some forcibly inputted noises together with some out of place racket, layered over the top of the aforementioned rattle and twang.

You would be mistaken, however, as one Kyoto-based sound artist and his group of friends did just this, and in quite spectacular fashion.

Ally Mobbs is the co-creator and organizer of a unique community of producers who work on a project known as Beat Picnic, making music from the sounds we hear every day.
“Beat Picnic is going to a location, recording sounds and then making a piece of music from only those field recordings. You have to make everything yourself; it’s an exercise in sound design.

The name Beat Picnic came about simply because the original intention was to chill and have a picnic while making beats,” he explained.

Despite having a full-time job to juggle on top of his already numerous musical priorities, the idea came to him and a friend after an event one day. “It started as a drunken plan between myself and David Cummings (soundcloud.com/agargara). We were at a subway station after an event and he suggested riding on the subway and making a track from just sampled sounds. We agreed it wouldn’t be the most pleasant experience, so I suggested doing it in a park with food and calling it Beat Picnic.”

So far the project has taken Beat Picnic to a variety of different locations across Kansai, among which are the Imperial Palace in Kyoto, Makino in Shiga, and The Mint skate shop in Osaka. As with any new venture, rules are in place, “Only sounds sourced from that one location can be used; no instruments, synths or other samples such as drums are allowed,” Ally said.

Rules though, make things challenging. “We often end up with too many recordings to sift through and choosing what to use and what to leave out can be hard. One of the hardest things when first starting is getting usable kick drum sounds or sub bass from the recordings. After a while you learn what kind of objects or materials will produce enough low frequency for shaping and editing later.”

A lot of the sounds will need editing, but some work best as they are. David Cummings, the other half of the founding duo of Beat Picnic, says, “If you try too hard to force a sound to sound like something else through EQ and other effects, it will usually sound a little flat. I think it’s better to try and roll with the sounds you get rather than forcing them into a box.”

Although they face difficulties in coming up with a listenable track at the end of the process, fun plays a huge part in their motivation to get out there. “The most fun aspect of Beat picnic is getting to visit places and experience them in new ways. Once you’re in the mindset of looking for sounds, you notice things you wouldn’t usually,” David said.
Interest in Beat Picnic hasn’t been limited to Ally and his collective. After setting up a Bandcamp site (an online publishing platform) and uploading Beat Picnic tracks to Soundcloud, the project has been garnering online attention, too.

As a thank you to those who’ve supported the project so far, they have been sending out cleverly presented packages to places as far afield as Canada, France, and Denmark.
“We made a bento box containing a cassette of the first Beat Picnic release, a handmade contact microphone, a pair of chopsticks for tapping out beats and some extra stickers. The number was limited so quickly sold out but our second release will also be available as a bento set,” said Ally.

So what’s next? “The next step is getting the second release ready. The locations for Beat Picnic 2 were Arashiyama monkey park and Shimogamo shrine in Kyoto. Our next release will include tracks from producers outside of Japan that we have sent sample packs to. As part of the release the new samples will be available as packs and Ableton Live drum racks for people to incorporate into their own productions or, if they’d like, make into their own Beat Picnic tracks.”

Beat Picnic isn’t Ally’s only project of course. Using handmade midi controllers, digital instruments and his beloved bass guitar, he tirelessly produces music on software that to a layman looks like something out of Star Trek.

“I try to perform at least once a month, even if it’s just playing on the street with a battery amp. I also play a regular event in Kyoto called Quantizer which is all instrumental hip hop and abstract beats. I was really happy to find a local event that my music fit into really well and I get to play with some really talented beat makers.”

David Cummings, who is now back in California, speaks of starting up a Beat Picnic Oakland. Keep an eye out for this as well as all the current and forthcoming releases from the original Beat Picnic clan. 