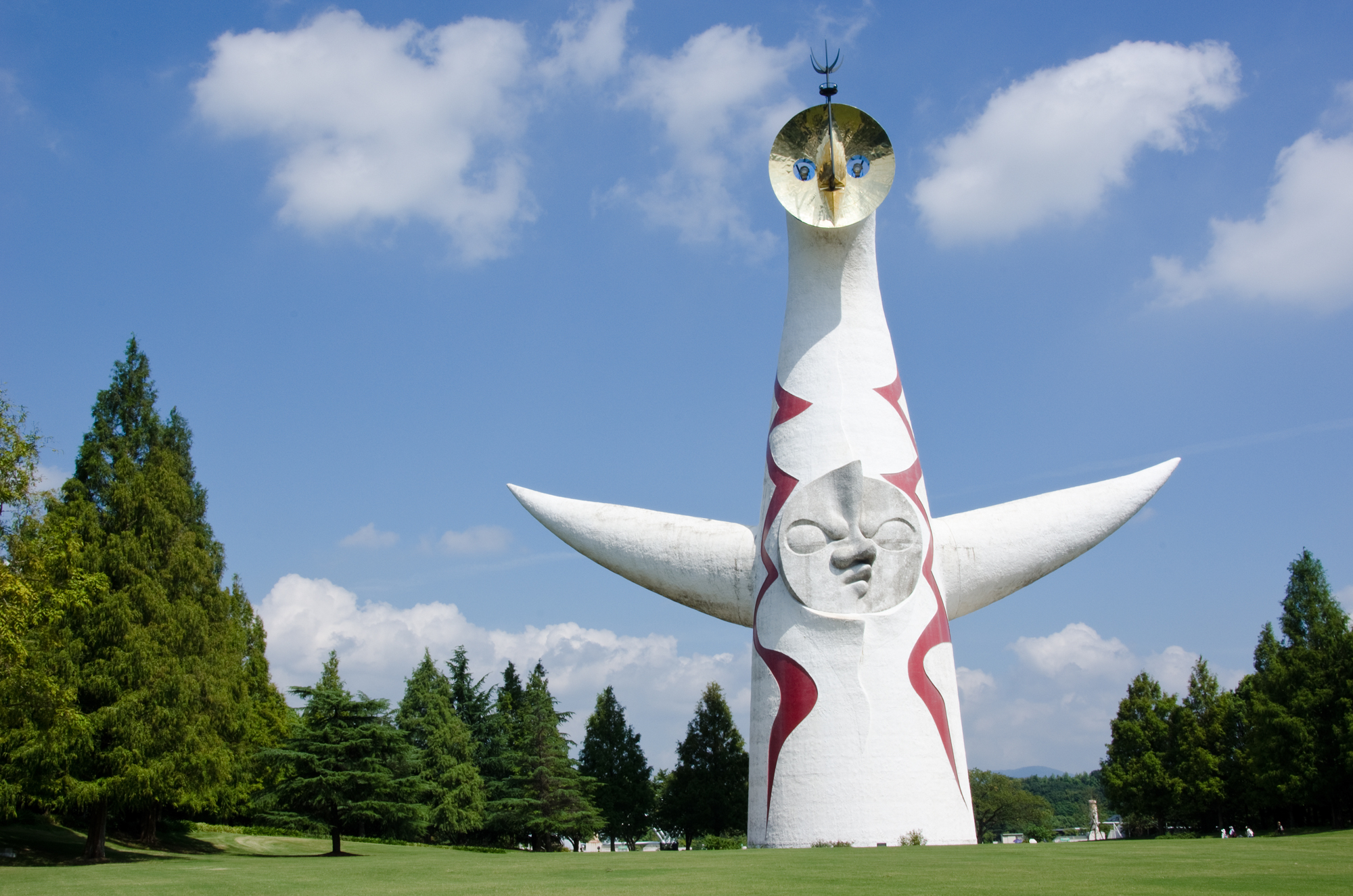 While visiting the large and picturesque Expo Commemoration Park (Bampaku-kinen-koen) in Suita, you’ll stumble across the weird and wonderful Tower of the Sun. Designed by artist Taro Okamoto for Expo ‘70, the first World Expo held in Asia, the peculiar-looking 230-foot-tall white concrete structure with wings that span 80 feet coming out either side has become a well-known icon and a symbol of Osaka.

The 1970 Osaka World Expo came at a pivotal time in Japan’s history, an auspicious one where its role in the advancement of technology was boding well for the country’s future. The event showed off this fact, introducing the first bullet trains, displaying cell-phone prototypes, and premiering the first IMAX film. It also exhibited futuristic architecture, which is where the Tower of the Sun came into play.

“Progress and harmony for mankind” was the theme of the Expo, and Okamoto’s idea was to represent the past, present, and future together in one artwork. He did this by placing three different faces on his Tower of the Sun. The biggest face, which is fixed in the center of the tower at the front, represents the present. On the top of the structure sits a round, steel, gold-plated face, which signifies the future (its eyes are eerily lit at night time). At the back of the tower is the third face, a Zorro-mask-like mosaic which symbolizes the past.

There used to be a fourth sun on the inside of the tower, which represented the underworld, but it was removed and is now in an unknown location. During the Expo in 1970, the tower’s interior featured a 45-meter-high sculpture named the “Tree of Life,” which was intended to symbolize the evolution of all of Earth’s creatures. The eccentric creation was painted in bright colors and had globes and animal replicas suspended from it.

For many years, the inside of the Tower of the Sun has not been open to the public, but this month, the Tree of Life will be on display once more, as prefectural officials have been working on restoring the tower’s interior since October last year. The tower has undergone a large-scale 1.7 billion yen renovation back to its 1970 glory with improved quake resistance, and it is permanently reopening on March 19th.

After Expo ‘70, many of the 292 creature models associated with the Tree of Life exhibit were damaged, and some misplaced, including a life-size model of a mammoth! The model mammoth has been reproduced measuring three meters tall and 3.5 meters long, and other restored creature models include a trachodon and a mastodonsaurus.

While browsing the new and improved Tower of the Sun on your next visit to Expo Commemoration Park, don’t forget a visit to the botanical garden, the traditional Japanese garden, and its two museums: the Japanese Folk Crafts Museum and the National Museum of Ethnology.

Tower of the Sun