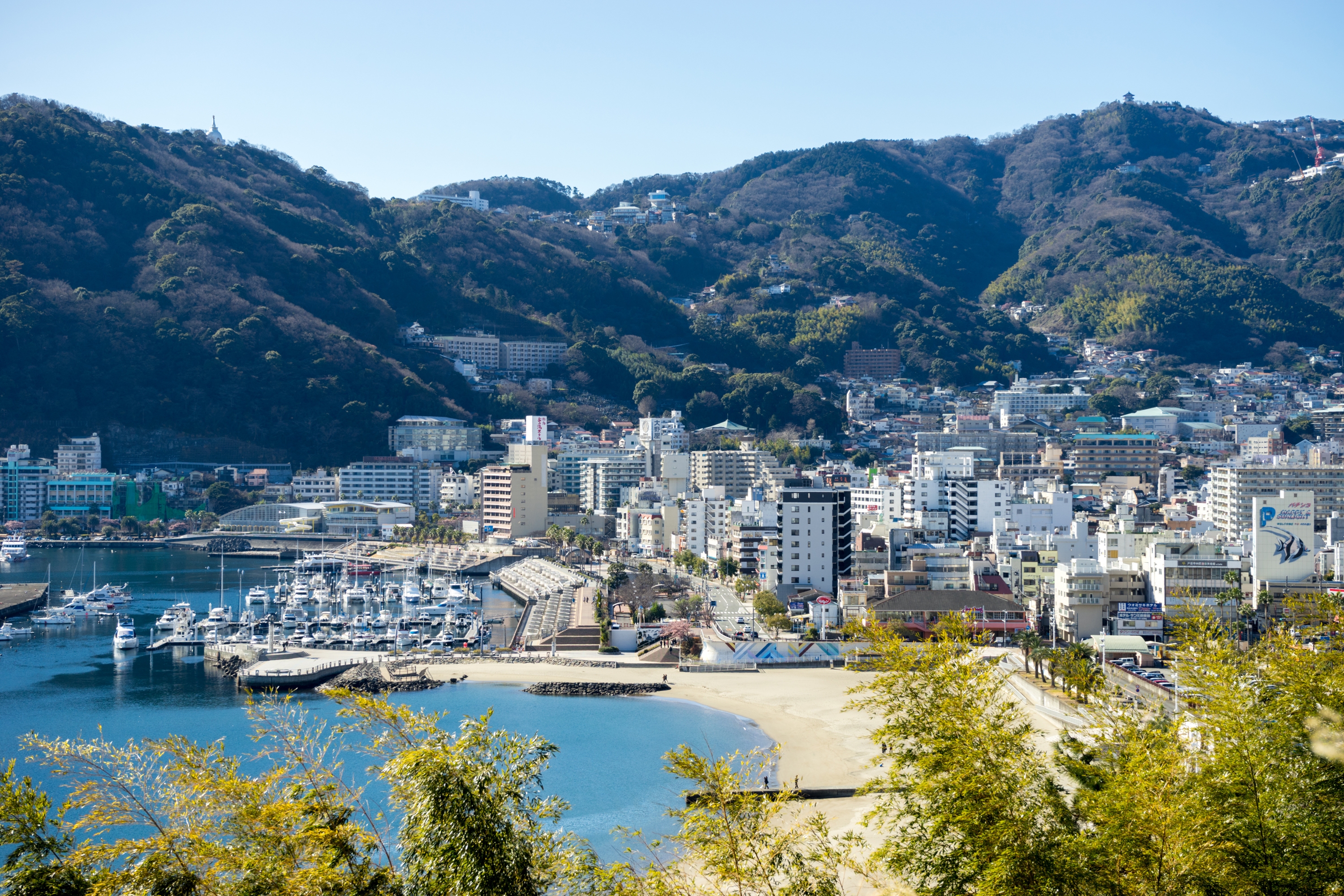 Discover the charms of Atami for a spring seaside escape.

The coastal town of Atami has been a popular vacation spot with the Japanese for several centuries. Located on the north-east tip of Shizuoka Prefecture, it is the gateway to the scenic Izu Peninsula but makes for an attractive getaway destination in its own right. While traditionally known for its hot springs and fresh seafood, Atami also boasts an array of interesting museums that range from the sublime to the slightly ridiculous. Its abundance of picturesque flower gardens make spring an ideal season to visit.

Atami witnessed a building boom with high-rise condos and resort hotels during the bubble era of the 1980s, but things slowed down when the bubble burst in the early 1990s. As a result, the town has a somewhat retro feel to it. Unlike some other resort areas in Japan, Atami hasn’t really yet experienced a surge in foreign tourism, so the vibe here is generally quite relaxed.

Atami Baien or the Plum Garden has been a fixture in the city for over 130 years. While the plum blossom season (January to early March) is over by spring, the park is still a lovely place to stroll through. For seasonal flowers, however, head to the Akao Herb and Rose Garden, which offers 12 different themed gardens on a hilltop setting, with the added bonus of splendid sea views. For the young at heart, don’t miss the swing set near the Coeda Café, where visitors of all ages line up for the chance to relive the childhood magic of legs pumping as you swing up high.

Another of Atami’s signature attractions is the MOA Museum of Art, which offers beautiful cherry blossoms in the sakura season and panoramic views all year round. The spacious and elegant buildings contain an eclectic range of artwork, calligraphy, and crafts, while the museum grounds include a Japanese garden and teahouse. For those wanting a further taste of Japanese culture, the museum also offers kimono dressing, tea ceremony and {ikebana} (flower arrangement) experiences. These should be booked in advance on the museum website.

If you want to explore more art, consider the attractive Sawada Seiko Memorial Museum. Sawada is a local-born sculptor and painter, and the museum is located on the edge of the aforementioned Plum Garden.

For some architectural opulence and cultural history, head to Kiunkaku, a villa that used to belong to the wealthy Uchida family. Built in 1919, the villa was turned into an inn in 1947 and was graced by some of Japan’s leading celebrities and writers in its heyday. The main building is built in traditional Japanese style, while the annex is based on a Western design, making for an interesting contrast. The small but very pretty Japanese garden completes the experience.

And now for something a little different: Atami is also home to the Hihokan. The kanji characters translate as ‘House of Hidden Treasures,’ but the usual name in English is ‘Adult Museum.’ While this may not be an aspect of Japanese culture that is typically mentioned in travel guides, the museum is an unabashedly tongue-in-cheek look at another side of Japanese life. Visitors must be over 18 to enter. The facility can be reached by a ropeway which starts down at the waterfront in the center of the town. Close by is Atami Castle, which was built in 1959 specifically as a tourist attraction. Like many of the area’s sightseeing spots, the observatory offers wonderful views. There is a samurai museum inside and a corner where you can dress up in old-style clothing.

Linked to its history as a popular resort area, Atami also has a long association with geisha, and even today you can watch trained geisha perform most Saturdays and Sundays at Geigi Kenban. After the show, you can mingle with the performers and take photos. Bookings are taken by phone, and the website is in Japanese only, so ask the tourist office for help if need be.

No visit to Atami is complete without a stroll along the beach. In this case, the place to be is Sun Beach, which runs alongside the main road through the city, with the added bonus of nightly illuminations.

Ieyasu-no-yu is an outdoor footbath facility located in front of Atami Station and is free to enter. You’ll need to supply your own towel to dry off afterward, or you can purchase a 100-yen hand towel at the vending machine.

The Ito River runs through the center of the downtown area. It’s fun to stroll around, perhaps while pondering which of the area’s many cafés, restaurants or bars to visit. Small bridges criss-cross the river, decorated with motifs of various sea creatures, and the area is lit up in the evening.

Atami has a variety of accommodation options, including traditional ryokan (Japanese inns), Western-style hotels and smaller family-run ‘pension.’ Given that Atami is a hot springs resort, even most Western hotels will have attractive bathing facilities. If you’re staying at a full-service ryokan which serves dinner, expect lots of local fresh fish. There are many seafood eateries dotted around the city, too. If you’re vegetarian or prefer a Western-style meal, then Atami’s local restaurants have also got that covered.

As Atami’s attractions are quite spread out, traveling by car is probably the most convenient way to get around, but buses and taxis are also available. There is a tourist service call the Yuyu Sightseeing Loop Bus, although it doesn’t go to the MOA Museum of Art. The one-day bus pass is a good option, and it is also valid for regular city buses to MOA.

Atami can be reached from Shin-Osaka or Kyoto in about three hours by shinkansen (bullet train). From Tokyo, less than an hour on the shinkansen or two hours by car.

Continue Reading
Advertisement
You may also like...
Related Topics:Atami, Shizuoka

Kicking it in Kawaguchiko
Beach Retreat