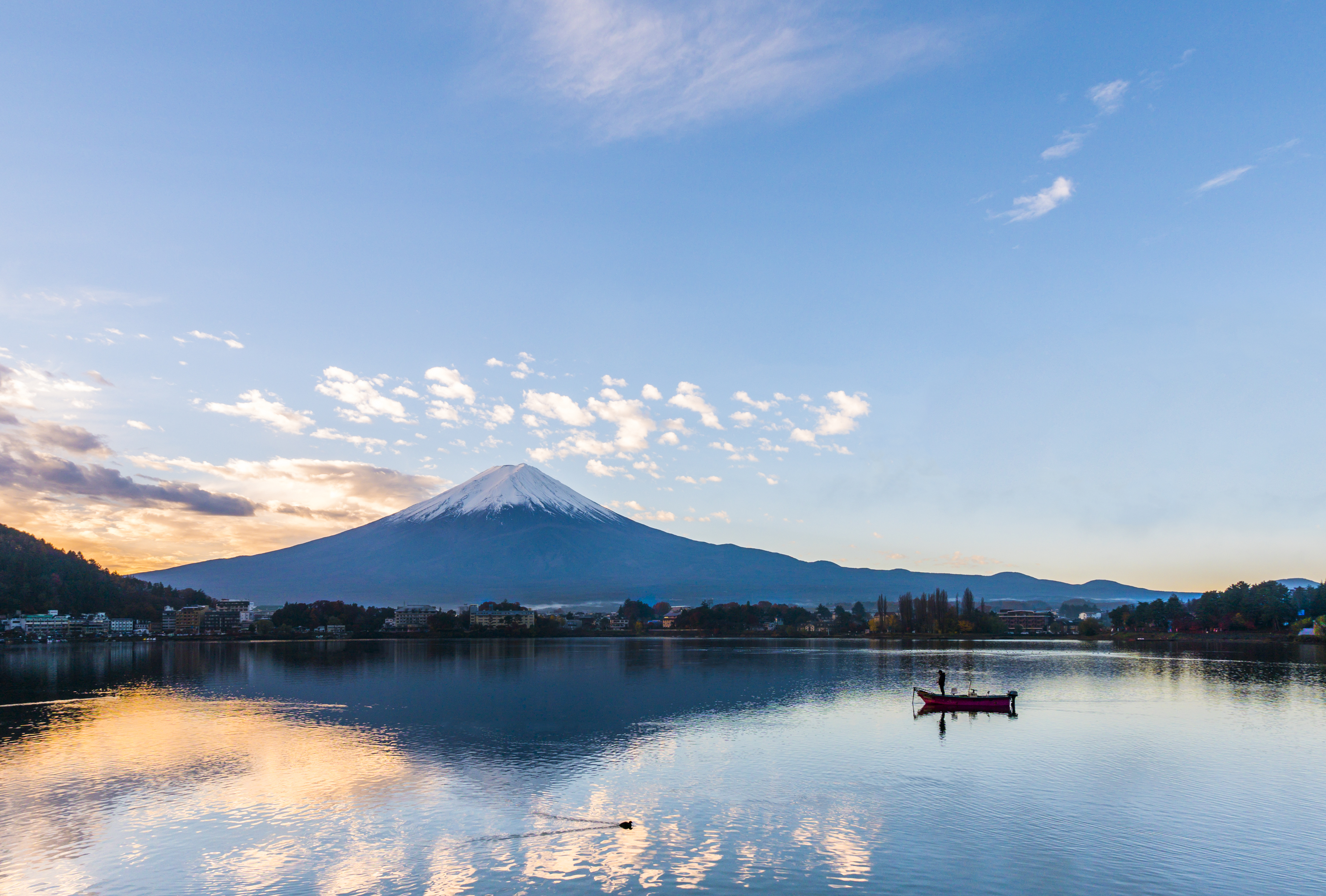 Kawaguchiko is the largest and most developed of the Fuji Five Lakes (Fujigoko), which lie just north of Mt. Fuji in Yamanashi Prefecture. Popular as a base for climbing Fuji, this beautiful area offers far more than just a view of the mountain or somewhere to pass through on your way to the summit.

Of course, the spectacular view of Mt. Fuji is one of the most striking features of Kawaguchiko. The breathtaking sight of the iconic peak rising above the town is even more impressive than you might expect – as long as it is not shrouded in cloud! Mornings are usually the best time in terms of visibility, so aim for an early start if you want that picture-perfect shot.

One of the best places to admire Fuji is from the observation deck near the summit of Mt. Tenjo. This area offers panoramic views of both the peak and Lake Kawaguchi below. To reach it, you can either hike up from the lakeside (which takes about 45–60 minutes) or take the Mt. Fuji Panoramic Ropeway if you want to relax and enjoy the view as you ascend.

As you explore Tenjo, you’ll notice several colorful statues of a rabbit and a tanuki (Japanese raccoon) dotted around. These are characters from an old Japanese folktale that is thought to be set on this mountain. The critters may look cute, but be warned the story is quite dark – it is a tale of revenge in which the rabbit sets the murderous tanuki on fire before drowning him in a river!

As well as the statues, the tea shop at the top of the ropeway sells special tanuki and usagi (rabbit) mochi. These delicious chewy pounded-rice treats are baked over charcoal and served warm, coated in a sweet sauce – perfect for refueling if you hiked up.

Whether you ascended the mountain on foot or via the ropeway, in order to reach the true summit, you need to take the path that runs up behind the observation deck. It only takes five to 10 minutes, and at the top, there is a small shrine. Keen hikers might also like to continue on from here to the summit of Mt. Mitsutoge (1,786m). 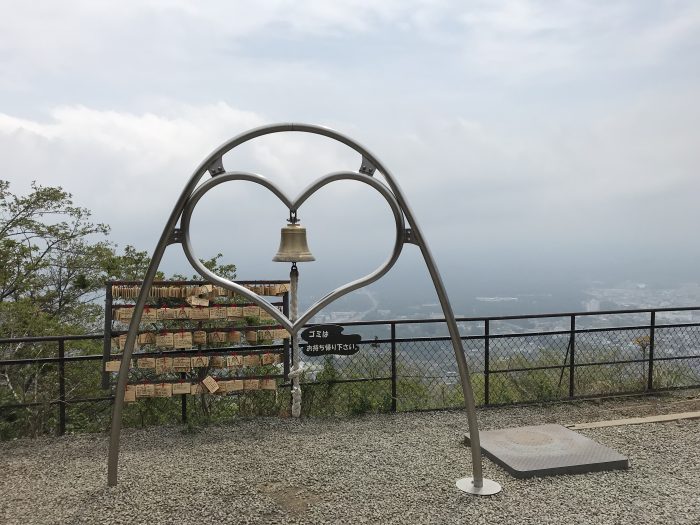 Photo: Ashley Owen
Ring the Bell of Tenjo and make a wish

One of Tenjo’s other popular landmarks is the Bell of Tenjo, where it is said that your wish will come true if you ring the bell while looking at Fuji through the heart-shaped frame. It is believed that couples who ring the bell together will have a long and happy relationship.

From this point, you can also spot one of Kawaguchiko’s other notable attractions: Fuji-Q Highland. Boasting several record-breaking roller coasters – including rides with the steepest drop, the fastest acceleration, and the most inversions in the world – it’s a must-visit for thrill-seekers and adrenaline junkies. The theme park is also home to the world’s longest haunted-house-style attraction – aptly named the ‘Super Scary Labyrinth of Fear’ – which at 900 meters long, is certainly not for the faint-hearted!

Those after a slightly tamer – but no less enjoyable – day out could go to some of the many museums dotted around the edge of the lake, including:
• Kubota Itchiku Museum: displaying elaborate kimono created by the artist Kubota Itchiku
• Yamanashi Gem Museum: showcasing gems, crystals and precious stones from around the world
• Kawaguchi Museum of Art: housing a permanent exhibition of artwork featuring Mount Fuji, alongside a number of temporary exhibitions 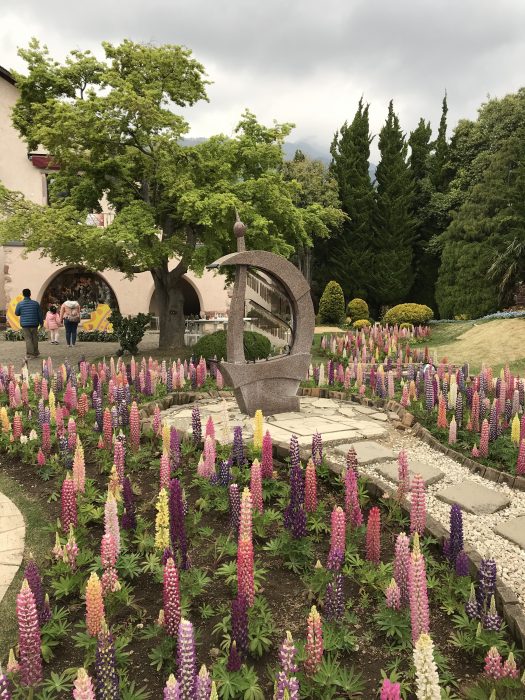 One of the more unusual museums is the Kawaguchiko Music Forest, which is dedicated to automatic musical instruments. Billed as a musical theme park, it contains a number of halls set within a European-style garden. Musical demonstrations of the automatic instruments, including the world’s largest dance organ, take place in these halls throughout the day. 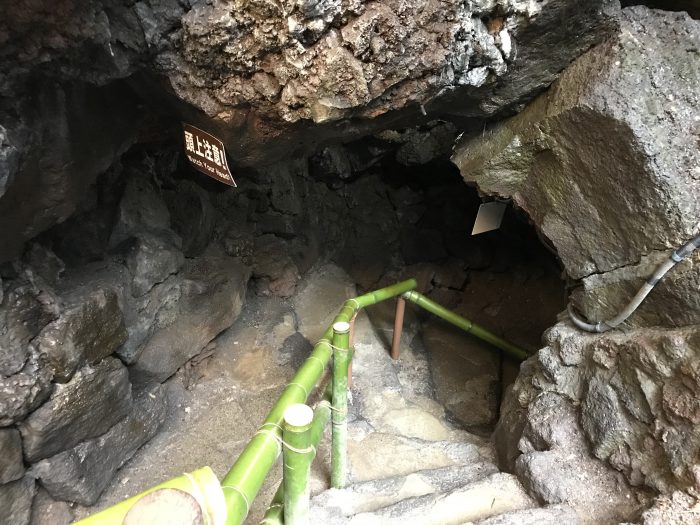 Explore the caves near Saiko Lake

Within the Fuji Five Lakes area, there are a number of caves that were created by previous eruptions of Mount Fuji. Located slightly further west of Lake Kawaguchi, near Saiko Lake, are a trio of such caves that are open to the public: Bat Cave, Ice Cave, and Wind Cave. There’s no need for a guide or special equipment (apart from the helmet provided), and children will love exploring the different tunnels and chambers.

Finally, visitors who enjoy sake should be sure to check out Ide Sake Brewery during their stay. The brewery offers tours of their facilities (in English and Japanese) twice a day for just ¥500, which includes a tasting at the end and a souvenir glass. Even if you can’t make one of the tours, you can drop in for a sake tasting anytime during their opening hours (9am–6pm) for ¥300.

Kawaguchiko is the most accessible of the Fuji Five Lakes. The easiest and cheapest way to get there from Kansai is by bus. Overnight buses leave from Osaka and Kyoto, which will take you all the way to Kawaguchiko station. The journey takes approximately 9-11 hours depending on where you travel from, and costs around ¥15,000 for a return trip.

Probably the most convenient way for visitors to travel around Kawaguchiko is by bus. There are three different lines – red, green, and blue – which between them cover most of the tourist attractions in the area. A two-day pass is available for ¥1,500, which gives you unlimited travel on all three lines for two consecutive days.

Kawaguchiko’s local specialty is hōtō noodles, which look similar to udon noodles but are even thicker. They are traditionally served in a miso-based soup with seasonal vegetables, and you’ll find this hearty dish in many of the restaurants in the area.

Get Spirited Away in Shikoku
Shizuoka Spring Getaway