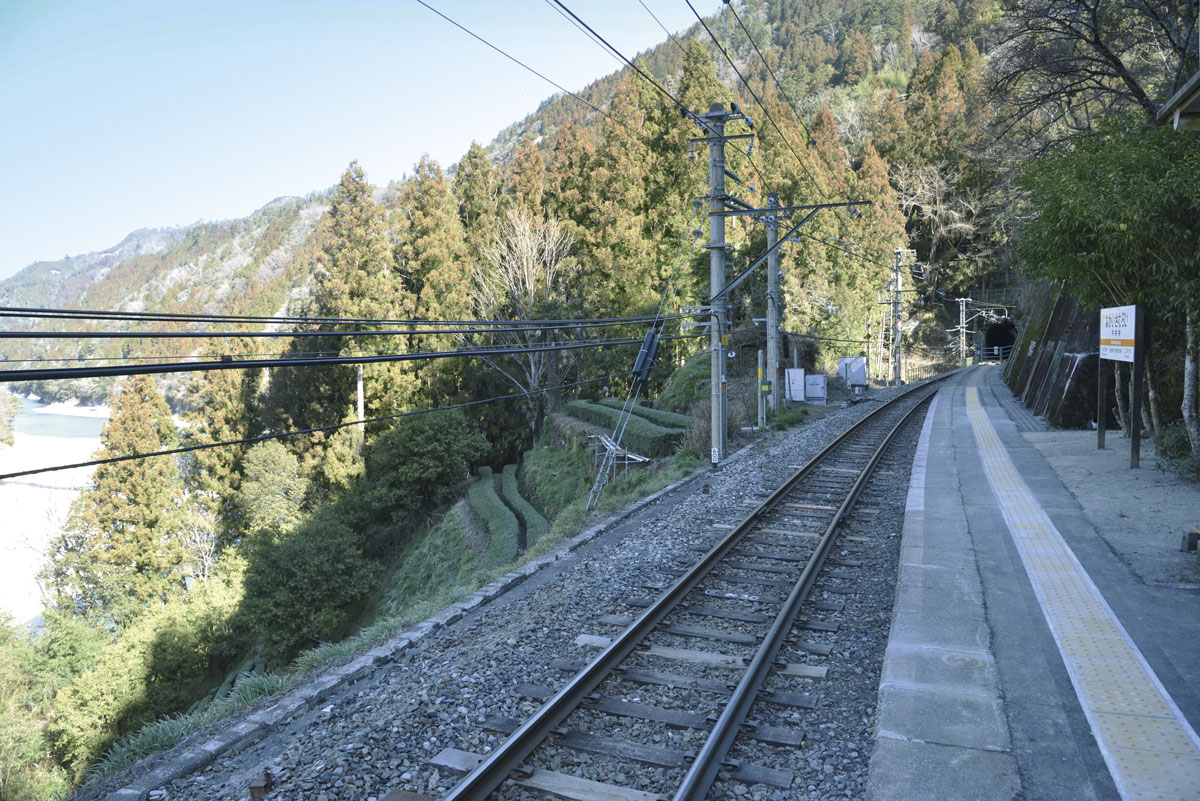 A three-hour train ride on the Iida Line from Toyohashi Station served by the Tokaido Shinkansen will bring you to secluded Nakaisamurai Station. Along the steep hillside in the vicinity of the station is a verdant tea growing area. Cultivation of tea in Nakaisamurai started long ago as a way to prevent landslides by reinforcing the soil, and also as a wall of defense against the boar and deer that would destroy farmer’s crops. That all changed in the mid-1970s, when a group of eleven local tea farmers founded Nakaisamurai Tea Producers’ Association and kickstarted a commercial operation.

The flavor of Nakaisamurai tea is sweet with a pleasant, subtle bitterness to it. Since tea cultivated on a steep hillside in the mountains do not receive much sunlight, Nakaisamurai tea leaves can be likened somewhat to gyokuro, a type of green tea which is deliberately grown in shade during the final weeks before harvest. Further processing then reduces the aroma, bitterness and astringency. Produced in this way, tea from Nakaisamurai has won many accolades, including the Nagano Prefecture Governor’s Award eight years in a row.

Tea plants are infested by insects after the second harvest of the year, and generally subject to treatment using pesticides. Because Nakaisamurai tea is a first flush tea—in other words, utilizing only the leaves from the first harvest—there is no need for pesticides and as such is completely organic. As the terrain of the plantations are impractical for machinery, the tea leaves are picked by hand. Farmers know the tea is ready for picking when the first five leaves of the plant begin to emerge, but only the three uppermost, young leaves are picked. The result? A light and delicious brew.

One of the first processes the newly-harvested tea leaves must undergo is steaming, which halts the fermentation process and locks in the flavor. Mr. Yassa, who has run a tea factory nearby for 32 years, is a specialist in this process. He has pioneered a method of steaming the leaves and stems of this tea so lightly that they are nearly raw. Tea leaves that have been thoroughly steamed have a tendency to become soupy like paste when brewed, with an overly sweet, strong flavor. The leaves of this lightly steamed tea, on the other hand, can be eaten as they are.

Yassa is a proud tea producer himself and goes to great lengths to ensure the quality of the soil in which the tea trees are planted, using a potent mix of silicon and microorganisms. He is equally discerning about the teas he uses to make his original, award-winning blend—namely, the flavorful Fukumidori, Yabukita, and Kanayamidori varieties. His blend was recently selected as one of the top 100 gourmet products of 2020 by the prestigious Japanese magazine, Cuisine Kingdom.

While a relatively small tea producing area, the passion of producers like Mr. Yassa places Nakaisamurai firmly on the map, making it a destination for Japanese tea lovers everywhere.

In June each year, the house of Mr. Ezaki near Nakaisamurai Station becomes Café Samurai. In fact the house has undergone several transformations: it used to be the Nakaisamurai Station building, and the backyard still serves as the platform. The idea to start the cafe came after Ezaki was approached numerous times by travelers who asked where there was a place to have a cup of tea. But Mr. Ezaki does not simply offer any tea: he offers patrons the chance to taste the locally-grown, high quality teas from Nakaisamurai’s eleven producers. Visitors will be surprised by the difference: the author was treated to three teas highly contrasting in aroma, body and flavor. There is also a tour to hand-pick tea leaves organized by NPO Tsumemogaki in June.

Three stops from Nakaisamurai Station is Hiraoka Station, located in the heart of Tenryu village. Hiraoka Station is unique in that it doubles up as the hotel Fureai Station Ryusenkaku, which opened in 2000. A long-awaited project at the time, the space was popular with villagers who took advantage of the facilities for holding banquets and other events, but these patrons having aged, the hotel is much more tranquil these days. It consists of a restaurant on the first floor, ticket gate and hotel lobby on the second floor, guestrooms on the third floor, and a lounge and natural hot spring on the fourth floor. The restaurant serves special rice bowls topped with local specialties to offer guests a taste of the Minami Shinshu region of Nagano Prefecture. These dishes include the Yamabiko Bowl, a salty-sweet boar stir-fry with miso fermented bean paste; the Seiryu Bowl with fried river trout and a sweet sauce; and the Shinshu Salmon Bowl with Nagano-raised Shinshu salmon in an onion marinade.

The Bridge That Doesn’t Cross the River

The Iida Line train takes an unexpected turn between Shironishi and Mukaichiba stations. The train starts to cross the river, but before reaching the opposite side it turns 180 degrees back on itself. The railroad was originally planned to traverse a mountain tunnel, but the tunnel collapsed due to natural disasters. There was no other option aside from constructing a detour and having the bridge circumvent the section.

The Kii to Unlock Your Winter
Kinosaki: More Than a Hot Spring Town