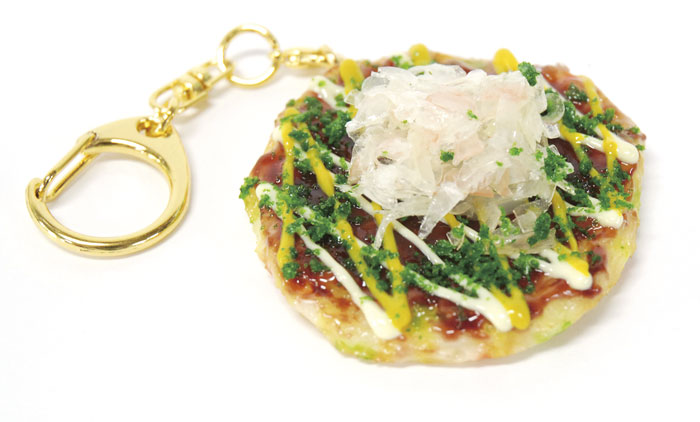 It looks like a kitchen, but something’s wrong. Fumio Morino, clad in loose T-shirt and jeans, is hunched over his workbench, layering slices of BBQ pork before pouring over a gleaming, brown sauce. Behind him, metal bowls sit atop the gas stove, and containers of vibrant fruit – red raspberries, plump blueberries and wedges of melon – are prepped and ready to go. That would all be normal kitchen business were it not for the dirty builder’s tools sitting side-by-side with the knives, tubes of silicone littering the workbench, and paint splattered on every surface. Besides, Morino has just lit up a cigarette while still fussing over the pork – no doubt violating the first rule learnt at chef school.

Technically Morino isn’t a chef, although he comes pretty close. He long ago mastered the classics of sushi, udon and ramen, as well as scores of desserts and pastries. The only difference is that his food is made of plastic, and instead of mastering the alchemy of taste, Morino’s genius lies in the art of deception. 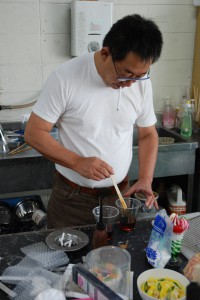 Morino makes plastic foods, known in Japanese as “shokuhin sample”. These are the remarkably convincing models of delicious dishes that crowd the display cases of so many restaurants, izakayas and coffee shops in Japan. From his tiny factory in Hirano, Morino crafts models designed to tell people everything about a dish – its size, components, even quality – in an instant. “The key to these models is in their ability to look just like real food,” says Morino, a second-generation fake food manufacturer. “If they don’t look convincing, they won’t do their job of tempting people to stop, look and eat.”

The use of model food as advertisement is a uniquely Japanese method that began right here in Kansai, not surprisingly in the food-obsessed city of Osaka. It took hold in the late 1920s when eating out at department store restaurants became fashionable. Today, the industry continues to thrive, and although there are no accurate figures for the size of the market, a Japan Times article from 2002 says annual sales are estimated to reach about 8.5 billion yen.

At the helm of a model food company started by his father in 1938, Morino has seen many changes in the industry, including the transition from wax to polyvinyl chloride (PVC) and silicone. He takes a break from his pork model to explain why the fake food industry has remained strong for 90 years: “Restaurants know if they’re the only shop on the street without model food, they’ll be in trouble.” He says the ability to see the product in 3D, not just in a photo, has proven benefits. “I had a client who sold boxed and frozen squid in department stores. After using my model, they had a two-fold increase in sales.”

A bowl of customised ramen, one that has original features that need to be made from scratch, can take three weeks to one month and costs over ¥10,000. For a restaurant that needs dozens of samples, the costs can rack up fast. “People need to understand that these models aren’t made by a machine that can crank out hundreds in a day,” says Justin Hanus, a business partner who is working with Morino to take plastic food onto the international market. “Each one is handmade to order by Morino-san and his staff.”

Indeed, the time and craftsmanship that goes into each model makes the fee seem paltry to say the least, but it is something that Morino says is well worth it. “You can get much cheaper Chinese models, made faster and with far fewer steps, but of course they don’t look nearly as real.”

Realism is at the heart of successful plastic food. But making food look real is not about perfection; indeed, it is quite the opposite. For the model to be convincing, the imperfections need to be there – it needs to look like a product formed by the random forces of nature and cooked by the imperfect hand of a human.
This realism is created by hand crafting each element and assembling it as the chef would. Take tempura: a prawn, steamed to pink perfection, is dipped in creamy batter and then “cooked” using heat. But in this case, everything is made from plastic, and the heat is in the form of hot air, which causes the PVC batter to puff up and transform into the crunchy, airy covering.

And each element is handmade from real food, which is how the model you see on the shelf looks so similar to food you get on the plate. Marbled beef is made by pouring silicone over a real piece of beef to make a mould that accurately replicates the surface textures of meat, including all wrinkles. White PVC is then piped in to represent the fat veins, and a layer of pink PVC is poured over for the raw meat.

Next comes possibly the most crucial part of the process: the colouring. Edges are burnt, insides are undercooked, and the model is given a natural variety of colours. In Morino’s factory, this final step is done in the airbrushing studio with a palate of paints in categories like “deepfried”, “pancake” and “grilled”.

With this combination of food, art and good old-fashioned handiwork, plastic food is attracting the attention of regular citizens, who want to learn about the process or try it for themselves. To this end, Morino has started running weekend workshops for school groups and interested individuals, teaching participants to make their very own parfait.

But Morino warns that mastering fake food takes serious dedication and hard work. “To legitimately enter the industry, one needs to complete a four-year apprenticeship, and even after that, real expertise will only come after 10 years,” he says. Add long hours and laborious work, surrounded by industrial plastics and paints, and you start to get the picture. “If a client wants a product in time for Christmas, we work nights and weekends to make the deadline,” he says. “You only do this job if you really love it.”

I thank Morino and Justin for their time and head for the door. But I’ve barely left the factory before I see Morino back at this workbench, cigarette in hand, intensely studying his pork model; striving for the most perfect imperfection.

Have a go at making the perfect plastic parfait or cake. Workshops run every weekend and last from 90 to 120 mins. Start times vary. ¥3,000 per person. Please call 06-6792-7543 to make a reservation (Japanese only) or email
info@morino-sample.jp.

For the biggest range of fake food items you’ll ever see, check out www.fakefoodjapan.com. All items are hand-crafted by Morino and his team.
[/box]