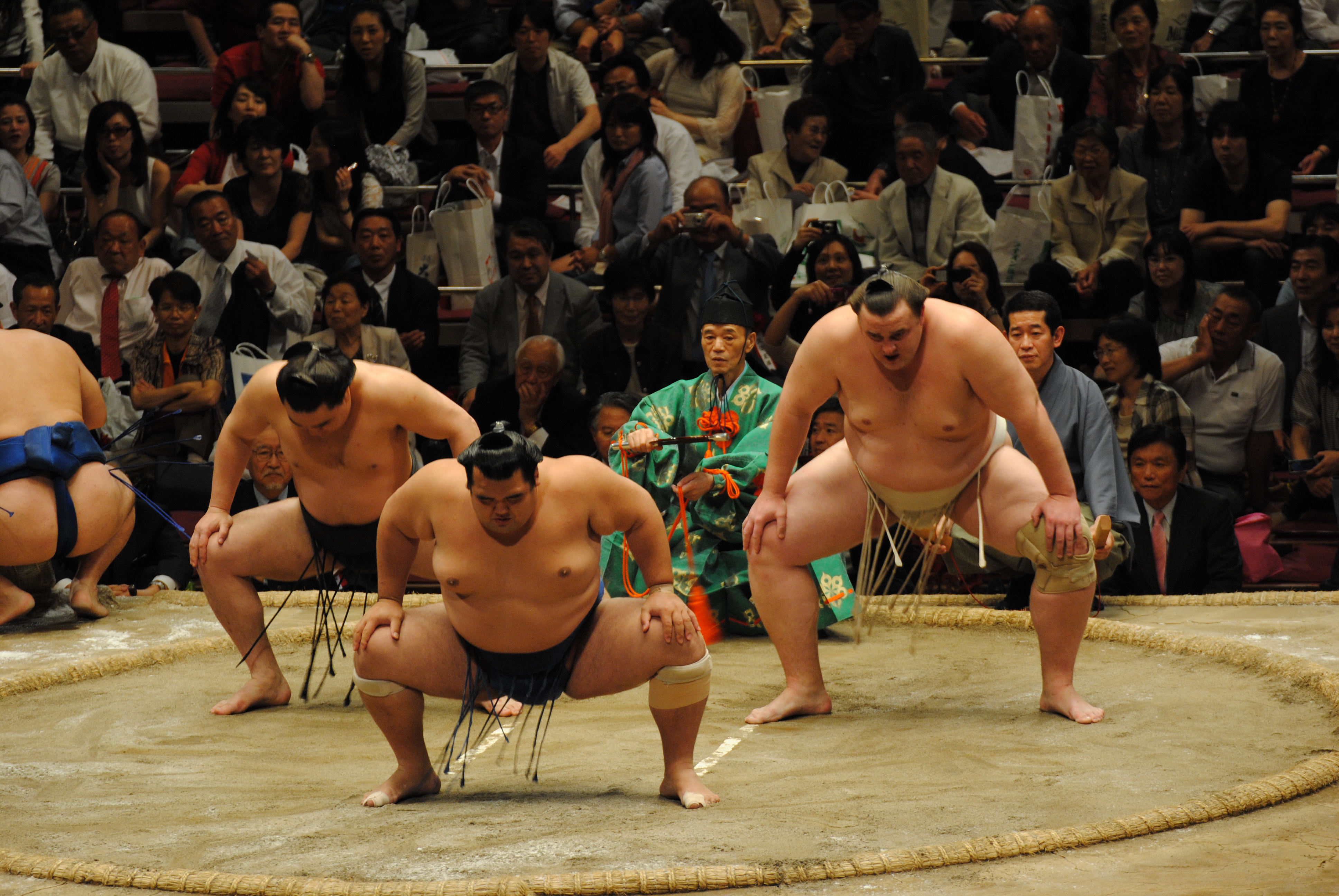 Sumo is back in Kansai. Seven hundred of Japan’s strongest athletes will be on display at Osaka’s Body maker Colosseum for a 15-day tournament from March 10–24.

The rules of this 2,000-year old sport are refreshingly simple. Two strong men, wearing nothing but a loincloth (cotton for the lower divisions, silk for the elite) enter a roped ring of 4.5 meters’ diameter. To win a bout, a wrestler must either push his opponent out of the ring, or knock him down within it. The raised solid clay surface makes for extra painful landings, especially when wrestlers can weigh up to 273 kilograms.

The pre-bout rituals make for particularly nice photographs – which are permitted so long as you remain in your seat. Wrestlers will thunderously clap their hands and stamp enormous feet to ward off evil spirits. Hands are also spread wide open before a bout, palms facing down, to prove that no concealed weapons lie within. Elite wrestlers also throw salt to purify the ring, in line with the sport’s Shinto underpinnings. The lacquered hairstyles, of course, evoke the topknots of samurai, symbolizing sumo’s status as the greatest living link to the samurai era.

This year, the greatest wrestler on display is Grand Champion Hakuho of Mongolia (194 centimeters, 155 kilo-grams), winner of the past three Osaka meets. Last year saw him surprisingly pushed to the limit by baby-faced compatriot Kakuryu, only managing to overcome him in a sudden-death playoff. And he will face an even stiffer challenge this time.

Sumo recently gained a new grand champion in the form of Mongolian Harumafuji, a comparatively light 133 kilograms but absolutely menacing on the belt. This highly-muscled, super-agile 28-year-old powered to sumo’s highest rank in late-2012, and is unbeaten in three of the past four tournaments, defeating Hakuho in all of those.

Sumo’s Mongols will not have it all their own way, though. Japan’s leading talent, 191-centimeter, 165-kilogram Kisenosato, is growing stronger by the year and surely due to win a champion-ship at some point. Equally hungry for success is the 198-centimeter, 180-kilo-gram giant from Estonia, Baruto, who memorably secured the runner-up spot in Osaka three years ago. The tallest wrestler is 203-centimeter, 155-kilo-gram Kotooshu of Bulgaria, possessor of the strongest grip in sumo.

The locals, of course, will fervently cheer the exploits of Osaka-born Goeido, currently on sumo’s third-highest rank, and whose fine technique enables him to throw far larger foes – even while pivoting!

Get the biggest bang for your buck

The sumo action runs from 8:30am–6pm daily (starting later on the final weekend). Tickets have been on sale since February 3, and can be purchased directly from the Bodymaker Colosseum, from ticket machines in convenience stores such as Lawson, or the website: http://sumo.pia.jp/en/sumo03.jsp. Five hundred cheap tickets are put on general sale at 8:30am every matchday, and fans should arrive early to avoid disappointment. But this is not advisable on weekends when huge early-morning queues form. Fans may enter at any time during the day, and for maximum enjoyment, should arrive before the spectacular ring entrance ceremonies at 3:45pm.
[/box]

The Kansai Craic Scene
Lost in calculation no more