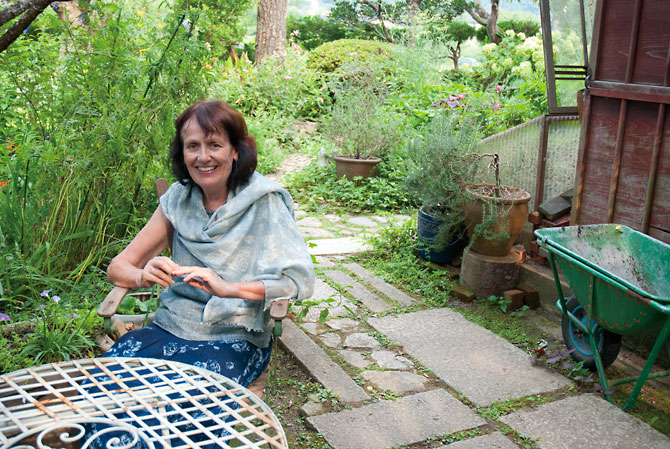 Summer is one of the hardest times of the year for city living. All the concrete traps the heat and it’s not long before we have to switch on the air con, and stop by a vending machine for a cold drink as we rush to catch the train.

Not so many miles away, in the village of Ohara, Kyoto, it feels like an entirely different kind of summer. Cicadas chorus, birds tweet, and the river cools the air a little. The scent of seasonal herbs fills the air. Although there’s still work to be done, life in the Japanese countryside visibly has a calmer pace.

This is where you’ll find Venetia Stanley-Smith, ex-pat, teacher, author, and star of her own NHK show. She begins each day rising just after dawn, tending lovingly to plants around her century-old cottage, and brewing up some herbal tea.

While she only formally teaches English three to four times a year at her Venetia International School, each day is filled with teaching of some kind: she writes blog entries, gives lectures on making herbal products, and is very heavily involved in bringing up her grandson.

Outwardly, Venetia leads a life that many people envy. She has a beautiful old home, a lush green cottage garden and a big family (two ex-husbands, four kids, two grandkids). Watching her NHK show, At Home With Venetia in Kyoto, you might imagine everything in her life is idyllic and has always been so. But like everyone else, Venetia has her fair share of hardship.

It’s true she was born very privileged. Her mother was the granddaughter of Lord Curzon, Viceroy of India. As a child she grew up in beautiful stately homes in Jersey, the Channel Islands, Spain and Switzerland. “But I remember feeling out of place,” she says. “I must have been around 7 years old, travelling, and I saw a beautiful cottage garden. I thought, wow. I want to live there.”

As a teenager in the 1960s, gardening was far from her mind. She was playing with a band and had plans to release a record, but things went awry when the same song was released by Simon and Garfunkel. A nagging feeling to learn more about the meaning of life led her to the teachings of Prew Rawat, an enlightened guru. Although he was only 12 years old, she went to India to join his ashram. “The whole reason I am who I am is because of India,” she says. “This 12 year old told me to slow down, and the importance of breath.”

After ten months learning from him about meditation and enlightenment, Venetia continued her eastern travels. She landed in Japan in 1971, and after a brief job as a go-go dancer in Tokyo, she followed the advice of another traveller to visit Kyoto. And it’s here she has remained.

Like many before and after her, Venetia began teaching English, opening her own school in 1978. As part of her daily teaching routine, she served herbal tea made from tiny pots growing in her home in the city. Those tiny pots were the start of something huge that she couldn’t even imagine at the time: her love affair with herbs, plants and all things from nature. By 1996 she had four children and was onto husband number two. The family moved from the city to Ohara, and began at last to build her dream garden around a 100-year-old cottage.

Plants and herbs, Venetia believes, are the answer to many of life’s medical and environmental problems. After seeing washing detergent pollute the stream next to the cottage, she vowed to look for more natural solutions for everyday living. She rejects plastic packaging and tools, and surrounds herself with wood, greenery, and tatami. She has spent years researching herb and plant uses, experimenting with them, and for the last four years sharing them with the Japanese public on NHK.

She has already written several books about plants, but has been working on a new book tie-in recently, a kind of seasonal diary-come-herbal guide. “There are many books or herbs and gardening but nothing that follows the seasons, like what’s in season and how to use it, so basically I’ve written a book that I wanted to read.” The book will also be translated into Japanese by a friend.

Venetia has drawn her own illustrations of all the herbs for the book. It’s this attention to detail, care and passion for nature that has made her such a fascinating subject for NHK viewers, and the public who still come to visit her garden. “NHK tell me that the show cheers people up, you know, they live in the city and sometimes they feel depressed, but they see the country lifestyle and it inspires them. Some people see the cottage and they say, I use to have one of those but I tore it down. Now I wish I hadn’t.”

While she has been able to steadily cultivate her dream garden, sow the seeds and then sit back to enjoy the results, Venetia’s personal life has been a little wilder. Her first husband didn’t work out, leaving her working full time and a single mum for six years, but they remain good friends. Of her four children, one still lives with her and utterly depends on her mother’s support after developing Schizophrenia. It’s another of her passions, she explains: “In Japan there’s a low understanding of mental illnesses. There are 100 different reasons people can develop schizophrenia and medication can help them lead a more normal life, but it’s also crucial that their needs are understood.”

Venetia’s Garden (ベニシアさん の四季の庭), a beautifully filmed documentary about Venetia’s life in Ohara, is out on general release from Sep 14. In Kansai, you can catch it at Kyoto Cinema, Theatre Umeda or Cine Libre, Kobe (from October). Official movie site: venetia.jp
[/box]

So while it looks tranquil on screen, her life is not perfect in a Hollywood sense. “You can’t have a perfect life, happy ever after, it doesn’t exist,” she says. “The truly rich are those who can enjoy what they have.”

Which sums up another Venetia life philosophy. While her NHK show is about a literal garden, the same crew have been working on a movie about her life. This movie is more about what Venetia calls an inner garden: your life, your spirit. What moves and motivates you. She believes abandoning the cell phone and the office building and being close to nature really helps us find that inner garden.

All very well if you live in Ohara, but what about those of us that have to live in tiny apartments and have commute on the JR line to earn a living? “You don’t need a garden like mine to enjoy nature,” she says. “Just go and sit outside – on a beach, or by a riverbank. Just take some time to experience each season. Our time on earth is sacred. We should celebrate each moment.”

www.venetia-international.com
Please note that Venetia’s garden is not open to the public.

The beautiful game
Sweet success is in store