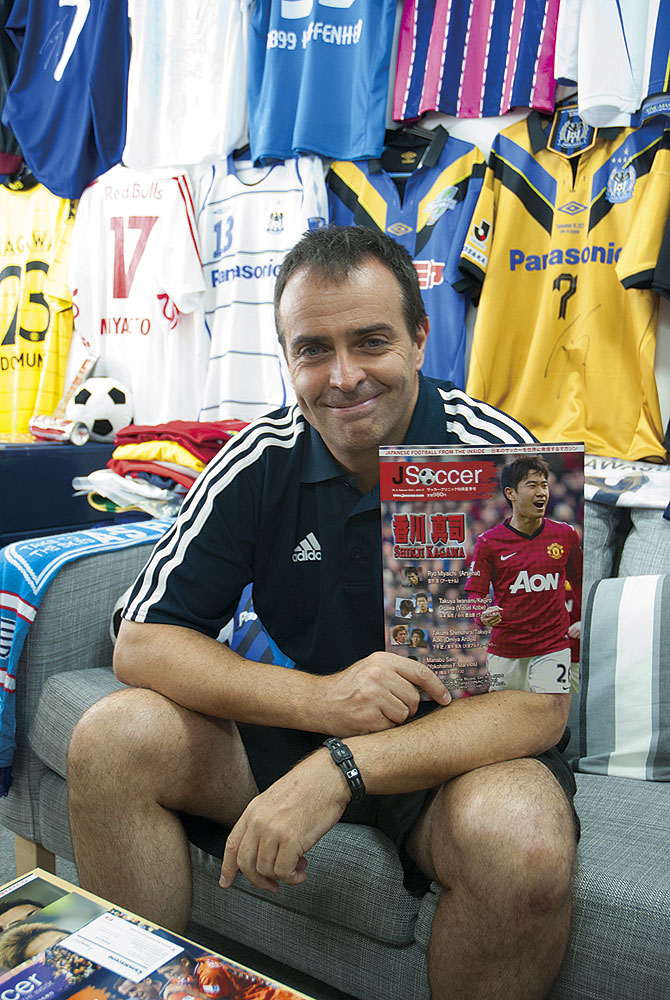 Kansai Scene: What was your motivation to start JSM?

Alan Gibson: My original idea was simply to do a free magazine about J.League football. I was at the first J.League game and was a fan of Japanese football even before it became the J.League 20 years ago. I was following Matsushita Denki at the time (now Gamba Osaka). I started a website (jsoccer.com) blogging about J.League news and had always wanted to take that further.

KS: Who are your readers?

AG: Essentially it is English speakers – but from all over the world: Indonesia, Thailand, England, Scotland, Australia. Those are the direct subscribers anyway. The domestic sales of the magazine are harder to pin down. The magazine is mostly English, but I do try to throw in a little Japanese. Ideally it would be 50-50 but it’s difficult.

KS: What is your revenue model?

AG: Despite initially wanting it to be free, the magazine is for sale. We were able to get sponsors – notably Nike and Asics – which helps cover printing costs. We have a pay-what-you-like system online for accessing PDFs. Some people pay just ¥100 yet others will pay ¥2,500. Every little helps. The writers are all volunteers, but the translators and magazine designer are paid. After the first three issues, I signed up with a large Japanese publishing house called Baseball Magazine-sha, who distribute the magazine in Japan. It works well because I get some free images from the big image banks and they don’t interfere with the content. Ultimately though, we need more sponsors if we are to survive. Attracting those is the hardest part of the process. I have had to be bold and use the direct approach to even get this far, but people prefer to shower us with kudos and goodwill than pledge advertising dollars.

KS: Is it a one-man operation, or do you have a team?

AG: Essentially it is just myself. I had a partner until recently and of course there are the contributors and designer, but all the management and day to day running are done by me.

AG: It takes up a lot of my time, but I have to do other work to pay the bills. It isn’t a money-spinner. I referee J.League practice games, write for Gamba Osaka and Vissel websites, and occasionally still DJ (my main breadwinner in life – 30+ years in almost 20 countries) to make ends meet.

KS: Do you have a digital version?

AG: Aside from the PDF version, no. I’m thinking to create an App, but am still in the planning stages.

KS: Who are your competitors?

AG: Many of the big soccer mags mention J.League or release out-ofdate results, but as far as I know, there is no-one else publishing a dedicated English-language J.League magazine.

KS: How do you see JSM developing in the future?

AG: There is a new J3 League being launched next year and I would like to cover those smaller teams. Also women’s football. It just so happens that Rokko Island is home to the best women’s team in Japan (if not the world) – INAC Kobe Leonessa.

KS: Any advice for someone looking to start their own special interest magazine?

AG: Ha! Don’t. It’s no get-rich-quick scheme. But if you are prepared to put in the hard work and have a passion for whatever it is you are doing, it can be extremely rewarding.

To get your own copy, or find out more about Japan Soccer Magazine, visit: www.jsoccer.com

Want to learn more about everything J.League and gets some tips for starting your own mag? Join us at the next KSBM meeting to listen to Alan’s presentation.
• Date: Sep 18, Wed
• Venue: KR&AC, Sannomiya, Kobe
• Entry: ¥1,000 w/1d