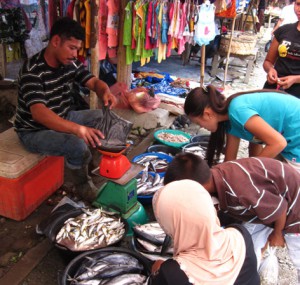 In the deep, green Sumatran jungle there are few worries. Away from the hustle and bustle of the Indonesian metropolis, in the jungle the silence is broken up by only the shuffle of leaves and the long calls of the orangutans.

With their bold, red fur and bulky hands, the severely endangered orangutans hang in the tree tops, swinging around, conversing with one another, and looking bewildered at the humans down below.

The guide commands the group to not make any sudden movements.

“Jangan lari, jangan lari,” he says as the trekkers witness a mother and a baby orangutan brisk past them. Experiences such as seeing orangutans or any endangered animal in their natural habitat are becoming increasingly rare in today’s rapidly developing world.

Bukit Lawang, a village on a river hidden in the mountainous jungles, is Indonesia’s only orangutan sanctuary. Located two hours from Medan, the biggest city on the island of Sumatra, it is one of the few places in the world where people can see orangutans living freely in their native environment. 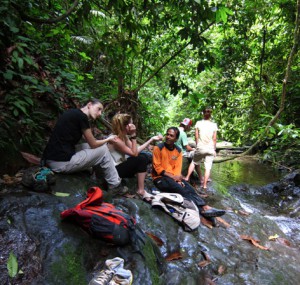 This peaceful village is the gateway to Gunung Leuser National Park, a UNESCO World Heritage Site, which sprawls all the way to the province of Aceh, the northern tip of Sumatra. Further into the Sumatran jungle there are other opportunities to see different kinds of monkeys, elephants, bison, and the even-rarer Sumatran Tiger.

Nonetheless, the trek in and around Bukit Lawang is particularly renowned as it is the nation’s home of the orangutans, with the Bukit Lawang Rehabilitation Centre for Orangutans founded in 1971. It was primarily established by the Indonesian government and international NGOs to preserve the ailing orangutan population due to hunting, trade, and deforestation.

The Sumatran orangutans are particularly rare. WWF (World Wildlife Fund) estimates there are 7,500 Sumatran breeds of orangutan left on the island, most of them in the Gunung Leuser National Park. The orangutans in Sumatra are in extreme danger due to the booming palm oil industry on the island. Palm oil is a commodity sold in Indonesia to local and foreign corporations, which has led to the deforestation of the region. 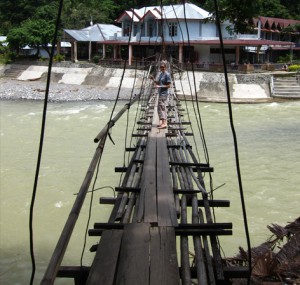 The palm oil industry has also had its effects on the local residents of Bukit Lawang. A flash flood hit the village in 2003 on November 2nd, attributed to illegal logging in the region. The disaster killed 239 people, with 1,400 people losing their riverside homes. This disaster led to a mass recovery mission with the help of the Indonesian government and foreign NGOs alike. Since then aid workers have been in Bukit Lawang to rebuild the devastated community. The people now rely on tourism as a way to redevelop their village.

Relief work volunteer, 24-year-old Feby Aritonang, from the University of Sumatra Utara, has been part of rehabilitation effort in the region.

Her program is involved with improving the public health of the region, which is problematic due to high amounts of poverty in the community. However, another key component of the program is to influence the locals to love the environment and to protect the animals that they share it with.

“Part of my work in Bukit Lawang is to teach the locals that good health works simultaneously with a good environment; as a well-kept environment will lead to a healthier life, and will also make the community more comfortable, serene and clean.”

In changing the locals’ mindsets, Feby’s program has initiated having local people start to replant trees and to learn more environmentally friendly ways to cultivate crops.

While there are problems in the community, the locals do respect and protect the endangered animals. The tour guides particularly have a special kinship with the orangutans, who even pray to the jungle before they enter it. They understand that both they and the orangutans rely on each other to survive.

Along with the jungle trek, the Bukit Lawang river is also a popular destination for people to go tubing.

One of Feby’s favorite things to do in Bukit Lawang is to just take in the beauty of the environment surrounding the village.

“On the riverbanks there are many small cafés and bars in the fresh air, with monkeys playing freely in the surrounding gardens and the river. It’s beautiful, you are right in the jungle.”

Make a trip of it!

Bukit Lawang can be reached by bus from the Kuala Namu International Airport in Medan, Sumatra. Flights to and from Bali are reasonably cheap, particularly with Air Asia. Sumatra itself also has many other interesting sights to see. One of particular interest is Lake Toba, the largest volcanic lake in the world. The city of Medan is also worth checking out.

Be Prepared
Jungle trekking can be difficult. Be prepared for rock climbing, sliding down mud slides, climbing trees, crossing rivers and of course mosquitoes! While malaria is not in Bukit Lawang, it is still recommended that you wear repellent as the mosquitoes are everywhere. Also be prepared for underdeveloped facilities such as toilets, showers and eateries. You are up in the dense jungle after all!

How Long?
It is recommended to take a two-day trek around Bukit Lawang to see the orangutans. However, the longer you go, the higher chance you will see other animals in the dense parts of the jungle such elephants or even the tigers