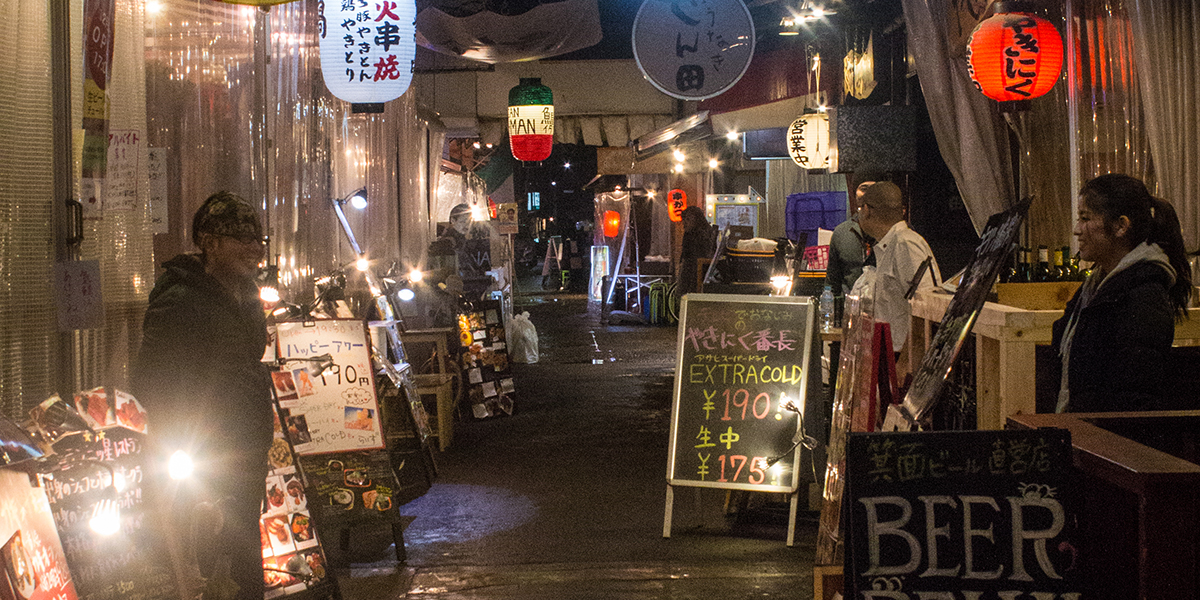 Come the weekend, Osaka’s Temma district is a bubbling cauldron full of amazing food and drink from all over the world. The atmosphere, like the food, is exciting and fresh in this winding warren lined with some of the hippest establishments around. This is a place where old meets new and affords visitors a unique and underground experience, by day and by night.

A couple of skips west from JR Temma station will land you on the famous Tenjimbashisuji shotengai, allegedly the longest shopping arcade in Japan. Back from its conclusion down at the Tenjimbashi bridge, it stretches an impressive 2.6 kilometres north to Tenjimbashi-1-chome. At its head lies the Osaka Museum of Housing and Living, which boasts Edo-period exhibitions. Under Tenjimbashisuji’s vaulted roof, you will find everything from bookshops to izakaya to pachinko parlors, all frequented by longtime Osaka residents. This is primarily a locals’ space, and as the aroma of street okonomiyaki drifts through your nostrils you’ll suddenly get the feeling that you’re in the real Osaka.

Take a break from the shotengai a few hundred meters down and head west across the main road to Ogimachi Park for a picnic and a great view of downtown Umeda before heading back in and along until you reach Temmangu Shrine. Dedicated to Sugawara Michizane, the Shinto deity of scholarship, Temmangu hosts the Tenjin matsuri every year on the 24th and 25th of July. This is rated as one of Japan’s top three festivals alongside Kyoto’s Gion and Tokyo’s Kanda matsuri, and even though the colorful processions make this the best time to visit Temmangu, the shrine’s elegantly designed honden (main hall) makes it beautiful all year round.

Daytime Temma may be more about history and culture, but by night it’s all about the food and drink. As the sun slips below the horizon, Temma comes to life in a way that few places in Kansai could only dream of, and the best part is that it’s all clustered within a five-minute stumble of the station. Out of the ticket gates turn right into the first maze of snaking allies with a dizzying selection of standing bars and yakitori spots. Head north up Tonya Dori (a slightly wider alley) to go deeper into the rabbit hole. As the alley opens up to a crossroads at the other end, you’ll find Tanaka Corner Bar; a lively hangout with cheap beer, mouthwatering soy sauce butter edamame, and a great vantage point for early-evening people watching.

Head a minute or so north and you’ll find (or lose) yourself at Luv Wine, a charming corner bar with stools and barrel tables for an authentic wine experience. This place is one of the highest-rated bars in the area, and it emanates trendiness through everything from its wide (if at times a bit pricey) selection of European wines, to its provision of tapas, and the attractive young clientele. It might be an idea to save this one until later for a nightcap to end a perfect romantic evening.

Turning right at Luv Wine will send you past a plethora of oyster bars, yakiniku restaurants and yet more standing bars before you come to the area hub. If you’re hungry at this point, why not try Que Rico, a Mexican restaurant serving all the traditional favorites including burritos, enchiladas and the highlight; spicy rotisserie chicken. With the décor consisting of cutouts of colourful Mexican wrestlers, the place is kitsch as you like, but that just adds to the fun. Take in another fetching foreign eating experience at the Spanish Bodegas Marushin just a few doors down.

The heart of Temma’s bar and restaurant district is Temma-ichiba (Temma market), which consists of two parallel streets of gastronomic hedonism. In this space you’ll find spots like Yakiniku Bancho, which is split into two halves; the first for meat and the second for fish. Also, Orb provides an intimate and ultra-modern take on the lobster bar, serving up its reputable crustacean cuisine at a reasonable price with beer and wine to match at ¥460 a pop.

Just down the street is the behemoth of the Kansai craft beer scene, Beer Belly. Opened in 2012 by owner Mr. Yahata, this mini beer hall delivers exclusively Minoh beer to your glass which has been kept at a certain temperature according to the style you asked for. The pilsner is a good recommendation to get you started, but it really doesn’t matter because whatever you pick you’re going to enjoy it. A bit expensive at ¥500–600 for a half pint and ¥800–1000 for a full one, but thoroughly worth it and enjoyable with a side of fresh garlic bread.

Directly across from Beer Belly lies kitchen and bar Gobu. Within this quintessentially Spanish loft-style setting, head chef and Alicante native Pablo Berenguer cooks up what he claims to be the most authentic Spanish food in town. He recommends the squid ink and seafood paellas, but the smoked Spanish ham is fantastic too. A set with specially imported Iberico and Terano ham will set you back ¥1,800. For a cheaper mediterranean option try Banco next door, which flies more on the Italian side of things with great coffee, pizza, and ham bruschetta to die for, and at more budget-friendly prices.

A Love Affair With Bonsai
The Site of Reversible Destiny