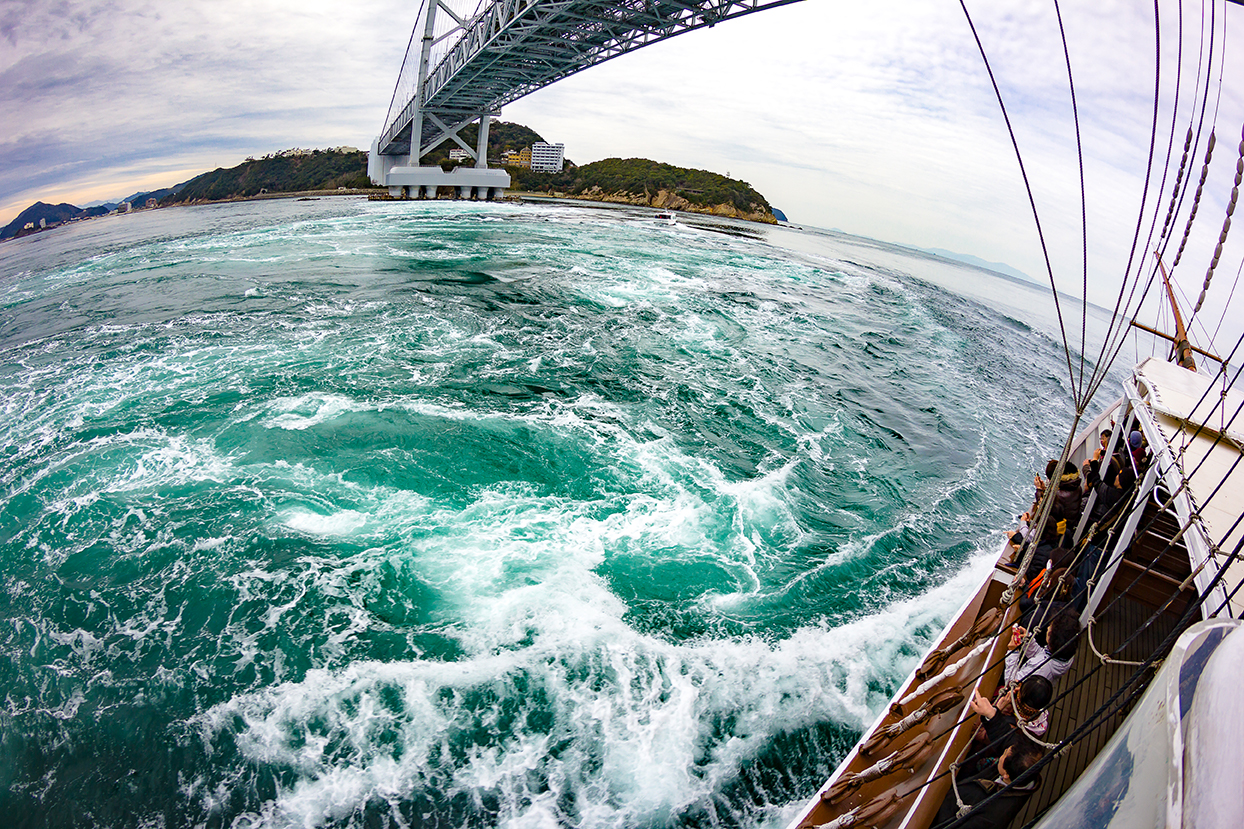 Tucked away in southern Hyogo prefecture sits Awajishima, the birthplace of Japan, according to Japanese folklore. To get there, you have to drive or take a bus across the Akashi Kaikyou Bridge, the longest of its kind in the world. The almost-2,000-meter suspension bridge connecting Kobe on the Honshu mainland to Iwaya on Awaji Island is about as high-tech as Awaji gets. Once you’re over the other side, you are in traditional countryside Japan. But with so many fun, unique, and interesting things to see and do, Awaji is the perfect spot for a weekend getaway.

Make your way to the Port of Fukura and jump on the three-deck, three-masted Kanrinmaru for a ride out into the Naruto Strait off the southern tip of Awaji Island. This sturdy, 50-meter-long and 10-meter-wide sailing ship will take you to the Naruto whirlpools beneath the Onaruto Bridge, which connects Tokushima to Awaji Island, providing safe passage over the moody, surging seas below.

In this narrow strait merging the Pacific Ocean with the Seto Inland Sea, powerful whirlpools swell and churn created by the large volumes of water carried by strong currents moving between the two sections of ocean. This natural phenomenon is influenced by high and low tides, and the unique underwater geography of the narrow strait.

Whirling around as though massive plugs have been yanked from the sandy seabed, water appears to be draining through to unknown depths beneath the sea. Clusters of camera-clad whirlpool watchers gather at the side of the Kanrinmaru deck vying for that coveted whirlpool money shot.

Fleeting on some days and tenacious on others, the whirlpools vary in size, depending on the time of year, time of month, and the intensity of the tides.

“Spring and autumn are when they’re at their most spectacular,” advises 33-year-old crew member Jiro Kurume. “They’re also best around the time of a full moon – the whirlpools can reach up to 20 meters in diameter.”

Still, the cruise itself is most pleasant in the warmer months, out of reach of the bitingly cold winds that are frequent in the other seasons. If you get seasick, or are not one for cruises, the second-best way to see the Naruto whirlpools is to make your way to Uzu no Michi, Onaruto bridge’s whirlpool-viewing platform, where you’ll look down through the glass windows at the spirals of seawater below.

Another bonus addition to your whirlpool experience is the Ashiyu Uzunoyu hot spring – a free, 100-percent-natural, hot-spring foot bath, where the water actually swirls around like its own gentle, mini whirlpool. You’ll find it near the Kanrinmaru boarding area, in front of the Uzushio Dome Nanairo building; perfect for pre- or post-cruise relaxation. 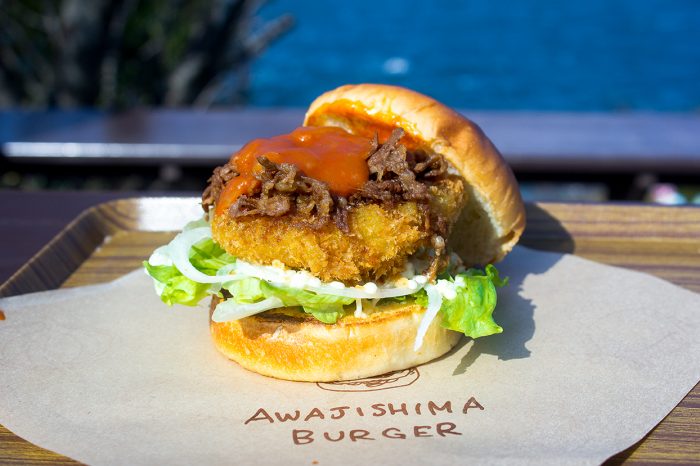 In Japan, it’s not unusual for a food item to gain cult status, which is precisely what has happened with the Awajishima Burger. Therefore, your visit to Awaji wouldn’t be complete without jumping on the bandwagon to suss out the revered burger for yourself.

Awaji Island is well-known, among other things, for its onions and you can see them hanging up to dry almost anywhere you go on the island. This explains the emphasis on the onion in the Awajishima burger. There are many incarnations of this burger across the island, but the most sought-after comes from Awajishima Onion-Kitchen.

If vast ocean views and a delicious local culinary creation sounds like a satisfying lunch hour to you, head straight for the Awajishima Onion-Kitchen (Uzushio Roadside Station). Be ready to line up at this popular roadside spot, but know that the wait will be worth your while. The “Awajishima Onion Beef Burger” is the recommended choice, though there are others, and before long you’ll be sinking your teeth into layers of crispy lettuce, creamy mayonnaise, shredded beef, and onion in various forms – onion chips, pickled onions, and an scrumptiously crispy, deep-fried onion cutlet credited for the burger’s signature crunch. Top that off with homemade tomato-and-onion sauce, sandwiched between a plump bun, and you’ve got yourself an award-winning burger.

This tasty creation won first prize at the national Tottori Burger Festa competition in 2013. A large part of the appeal is the local ingredients, namely the beef and the onions – both grown on the island. The tomatoes in the sauce are also home grown. Also popular, is the “Onion Gratin Burger,” which came in second place in the same competition. This burger is made with Awaji chicken and the gratin sauce contains milk from Awaji cows.

For curiosity’s sake, look out for the “Roadside Station Burger” – there’s only one on sale per day. This burger is basically a 250g slab of Awaji-beef sirloin steak inside a bun. It is pricey, but if you get a chance to try it you’ll see why! If it’s still there on the day you arrive, and you have some spare change, don’t miss your chance! If you’re feeling adventurous, finish off with a serving of their onion-flavored icecream (yes, it does taste like onion, and it’s not bad!). 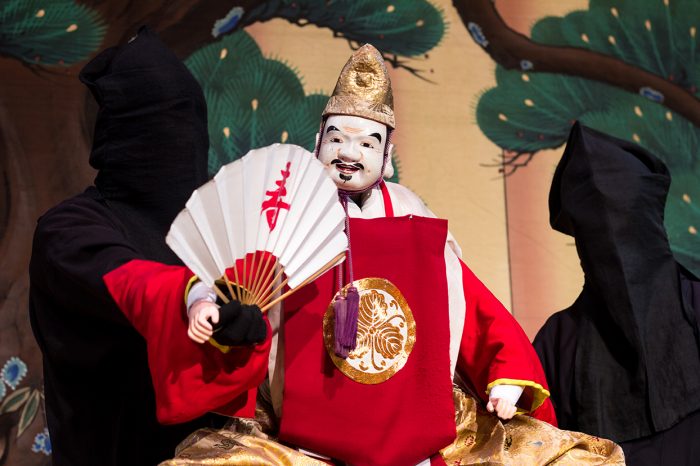 If it’s the arts and Japanese culture you’re chasing, Awaji Island’s traditional puppetry of more than 500 years, Awaji ningyo joruri, offers a fascinating insight into one aspect of the local arts scene.

Two beats of a taiko drum and a twang from a shamisen is all it will take to get your undivided attention, ready for the drawing of the long, navy curtain that cloaks the 12-meter stage inside the iconic puppet theater known as Awaji Ningyoza.

Depending on the stories planned for each day, there are a handful of characters you are likely to meet; among them, the majestic, red-shirted Ebisu, god of the ocean. Fascinating to watch, each of this four-foot doll’s movements coincides with a drum beat, yet the puppet’s motions are fluid and oddly humanlike. It is mesmerizing, and takes a good few seconds to register the three black-hooded figures giving life to this handmade, wooden character.

This is probably the most interesting point of difference between puppetry in the rest of the world and traditional Japanese puppetry like Awaji’s ningyo joruri (puppetry and chanting), which is similar to the well-known bunraku style. In most puppet theaters worldwide, puppeteers go to much effort to hide their manipulations from the audience, but in ningyo joruri, the manipulation is done in full view of those watching. But it is not at all distracting. In fact, the human movement behind the puppets seems to afford them an even more profound human quality.

“The biggest challenge is expressing what’s on a character’s mind and how he is feeling in his heart when you are feeling differently,” explains puppeteer Shinkuro Yoshida. “For instance, when you think something is funny and you want to laugh, but the character is supposed to be sad and crying.”

Yoshida’s craft really does require next-level concentration, as the audience learns in a mini workshop during intermission. Each doll requires the impeccable coordination of three puppeteers to bring it to life; a legs specialist, a left-hand specialist, and a head and right-hand specialist. Legs training takes seven years, followed by another seven on the left hand, and once you graduate to operating the head and right hand, you are finally a puppet master.
“But you can never fully master ningyo joruri. No matter how good you are, there is always something you can improve,” insists Tomosho Takemoto, another of Awaji Ningyoza’s puppet masters.

The puppeteers really show off their skills once they arrive at the part of the story where Ebisu starts to get drunk after drinking too much sake. Being in the company of a drunk person can be quite humorous, but not nearly as amusing as watching a drunk puppet hiccup his way through a monolog. The chanter kneels next to the musician to the side of the stage, voicing all of his drunkenly wisdom in slow, slurred, and jolly tones from a book of beautifully scripted kanji. You’ll be left wondering how long it took for them to perfect the ‘sloshed puppet’ routine.

Fittingly, Awaji puppetry is integrated into the island’s school curriculum so that students – some future puppet masters in the making – can begin learning the craft from a young age. The 500-year tradition is being passed down through the generations to make sure there are always trained puppeteers around to pull all the right strings. 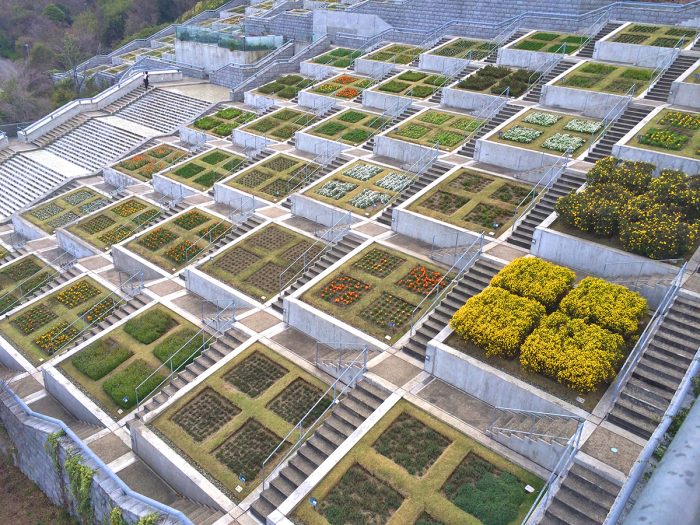 England Hill is a nature-oriented theme park located in the center of the island, equipped with gardens, a koala corner (housing six very lazy koalas), a monkey hut, an African bird house, and a rabbit warren. It’s the perfect place to entertain the kids while getting the chance to tuck into an Awaji burger.
england-hill.com

Nature and concrete complement each other at Japanese architect Tadao Ando’s Yumebutai Gardens. The Awaji Yumebutai, or ‘Dream Stage’ as it directly translates, is a beautiful space to roam around in and offers stunning ocean views.
yumebutai.org

Picture an outdoor natural hot spring with an amazing view overlooking the Akashi Strait and the Akashi Kaikyo Bridge, set against a big, blue, cloud-specked sky. That is Awaji’s Matsuho-no-yu onsen experience.
matsuho.com

Renting a car is recommended for getting around Awaji, but if you’re not pressed for time it is possible to get around the island by bus.
For information about cycling around Awaji Island, contact or drop into Giro d’Awaji coffee shop near the Fukura harbor area.
giro-di-awaji.com