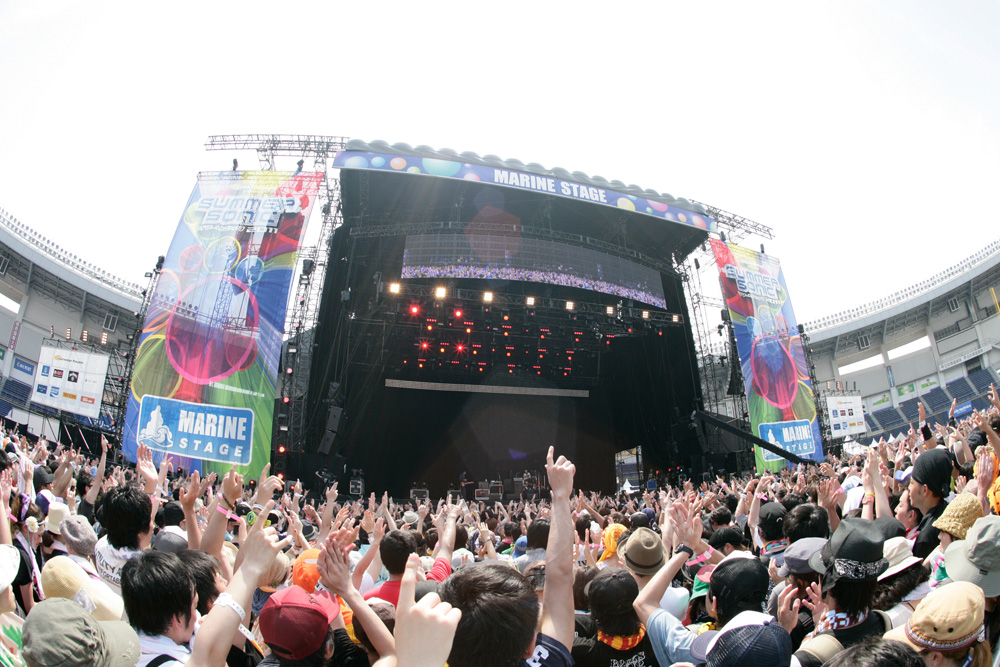 So what if other festivals offer fresh air and lush backdrops? Summer Sonic is the only major festival in your backyard. This year’s line-up is typically eclectic, with glam-pop androgyne Adam Lambert, electro-pop rascals Crystal Castles, altrockers Green Day, are-they-still-together Tears For Fears and some bird who sings about umbrellas, all sharing the bill.

It also has plenty of homegrown talent, including Crossfaith, an Osakan metal outfit that’s supported the likes of Machine Head, Funeral for a Friend and Hatebreed.

Now they’re home again and gearing up to play Summer Sonic (thought sadly only the Tokyo leg). We had a word with singer Kenta Koie.

Kansai Scene: This will be your second appearance at Summer Sonic. How was the last time and how does it compare to other festivals?

We played as an opening band but tons of people came to our show. It was such a great show. Most Japanese music festivals are held in the countryside but Summer Sonic isn’t – that’s the gap from other festivals. We always get a different reaction at Summer Sonic.

KS: Which other artists are you looking forward to watching perform?

I’m a big fan of Green Day, so I’m beyond excited to watch and sing along with them. I also want to catch Passion Pit. Their last album “Manners” is my favourite album.

KS: Are you playing any other festivals this year?

We’ll play at Treasure in Nagoya. And we’re going to play at the Vans Warped Tour 2012 in London!

KS: Do you have any advice for any first time festivalgoers?

Drink water. It’s the most important thing to survive at a music festival. You don’t want to go to hospital!

KS: What differences do you notice between crowd in Japan and around the world?

I think they’re similar, but Japanese audiences are a little bit shy, and the UK audiences love to drink! Every country has its own way of expressing passion.

KS: Japanese fans are known for bringing gifts to shows. Is there anything you want?

KS: Do you have any advice for artists playing in Japan for the first time?

Japanese people are a little bit quiet at the show, especially between songs. It doesn’t mean they dislike the band. Bands should just keep partying hard!

KS: What do you miss most about Japan when you’re touring other countries?

KS: As you’re from Osaka, do you have any tips on places to visit in the area

I usually go to a music bar called Rock Rock after shows. And if you want to eat Mexican food, then go to El Pancho – great food and amazing Margaritas too.

KS: What are your plans after Summer Sonic?

We’re hopefully going to tour the UK and Europe this fall.

Crossfaith won’t be gracing Osaka’s leg of Summer Sonic, but here are some domestic acts that will.

The girl: Kiriko Takemura, a former fashion blogger whose Youtube videos went viral in 2011. Beyond pastiche of Japanese pop culture.

The sound: High-fructose Harajuku corn pop. If her songs were any shorter you’d call them jingles.

Playing: Sunday on the Sonic Stage

Singalong with: “Jishin wo mi ni tsukete mieru sekai mo kawaru kana.” (Wear (fake eyelashes) with confidence and you might see the world in a new light.) — FromTsukematsukeru

Who: The first all-girl group ever to play the Budokan. Debuted in 1986, released two million-selling albums (Lovers and Princess Princess), then split in 1996. In January they announced they were reuniting to support Tohoku. Every show since then has sold out in hours. Known to fans as Puri-Puri.

The sound: Foot-tapping J-pop girlie rock. At least they were 20 years a go.

Playing: Saturday on the Ocean Stage

Singalong with: “Diamond dane. Ah ikutsuka no bamen umaku ienai keredo takaramono dayo” (Some scenes are like diamonds. I can’t explain well, but they are my treasures) — From Diamond

Who: A 5-piece band from Tokyo. They formed last summer and just 3 months later were selling out mid-size venues. No other act on the bill is exploding like these boys.

Playing: Sunday on the Flower Stage

Who: A drumming, singing rock chick born in Mexico to Japanese parents. Went to school in Argentina. Became a gravure idol in Japan.

The sound: Like Avril Lavigne swallowed a synthesizer, some speed and a Japanese dictionary.

Playing: Saturday on the Flower Stage

Singalong: “Tokei no hari ha gyaku ni kakugo o kimeta Alice. Usagi no ana ni tobikonde, nani wo shinji mashouka” (The clock’s going backwards, Alice has made up her mind. She’s jumping in the rabbit’s hole. What should she believe, then?) — From Day Dream Rider

Continue Reading
Advertisement
You may also like...
Related Topics:Summer Sonic