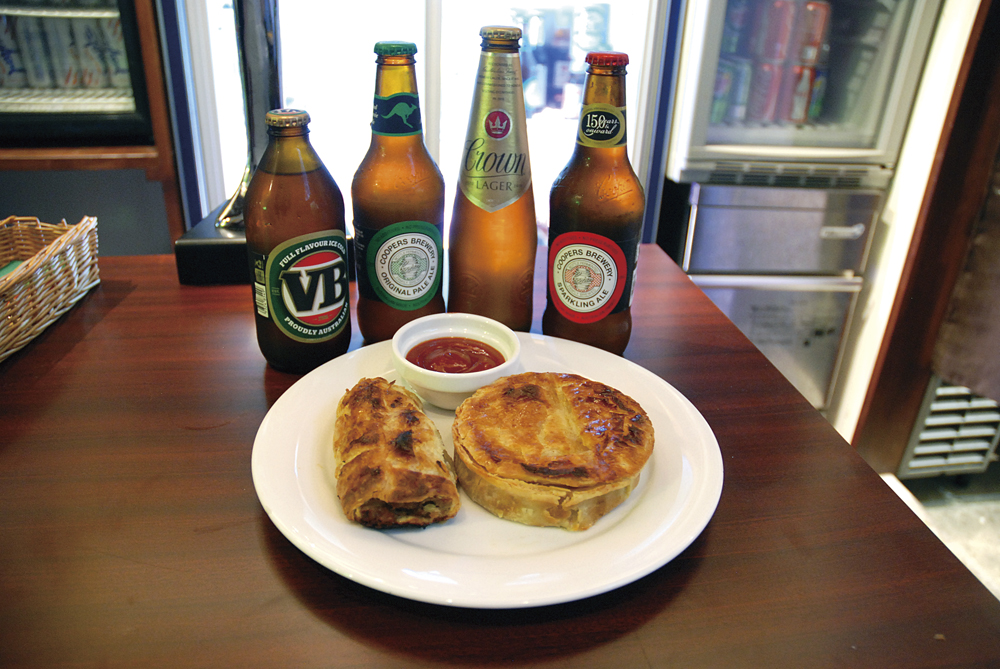 Cold beer, meat pie ‘n’ sauce, and sport on the TV. This could be a scene from any pub in Australia – from outback Queensland where men down cans of XXXX to inner Sydney where workers have drinks at beer o’clock.

But this is a far cry from Australia. This little slice of the antipodes is in south Shinsaibashi, nestled amongst the bright lights of izakayas, konbinis and love hotels.

For the last five years, Australian Andy Carne has been at the helm of Coolabah, a compact but lively Australia/New Zealand sports bar. “I used to run all the Aus/NZ events at other bars before finally deciding to start my own place,” he says.

The meat pie special may well be the best excuse to drop in. Andy makes his own pies and sausage rolls onsite. “It takes me about five hours to prepare and bake 50 pies,” he says.

Andy guarantees aficionados won’t be disappointed with his 100% real beef pies. “We’re so confident in the taste of our pies, sausage rolls, and pastry wrap, that we can claim they are the best home-made, Australian-style pastries in Japan and perhaps even Asia.” Real addicts even stop by just to pick some up for dinner at home.

But of course, the most important part of any pub is the beer, and Coolabah does not disappoint. It stocks Australian staples, including Coopers Pale, Coopers Sparkling, Crown Larger, VB and Pure Blonde, as well as many local brews. It also has Australian wines from Wolf Blass, Lindemanns, Penfolds and Tatiara. There’s a decent selection of spirits, but we suggest a bundy and coke (Australian for Bundaberg rum and cola) while you watch a game on the TV. Wherever you sit, one of the five screens will be in eyeshot.

“Coolabah has the biggest coverage of any sports in Kansai,” says Andy. “We can play any sport live at anytime, and do all games from English Premier League, to AFL, NRL, NBA, NHL, NFL and more.”

Watching a game of footy over a meat pie and beer – it doesn’t get much more Aussie than that.

[box]Coolabah
Coolabah will celebrate its 5th anniversary on the 12th and 13th of October. There will be live bands playing contemporary and classic rock with Australian and New Zealand songs in the mix. There’ll be drink and food specials all week, and 100 yen off pies and Australian beers.
Address: Housen Bldg. 1F, 2-16-13 Nishi-Shinsaibashi, Chuo-ku, Osaka
Tel: (06) 6213 5153
Website: www.coolabah.jp
Open: 7 days a week, from 6pm[/box]

Continue Reading
Advertisement
You may also like...
Related Topics:australia, coolabah, down under, food and drink, new zealand

The Garden of Gastro Delights
Squash in some seasonal kabocha yums