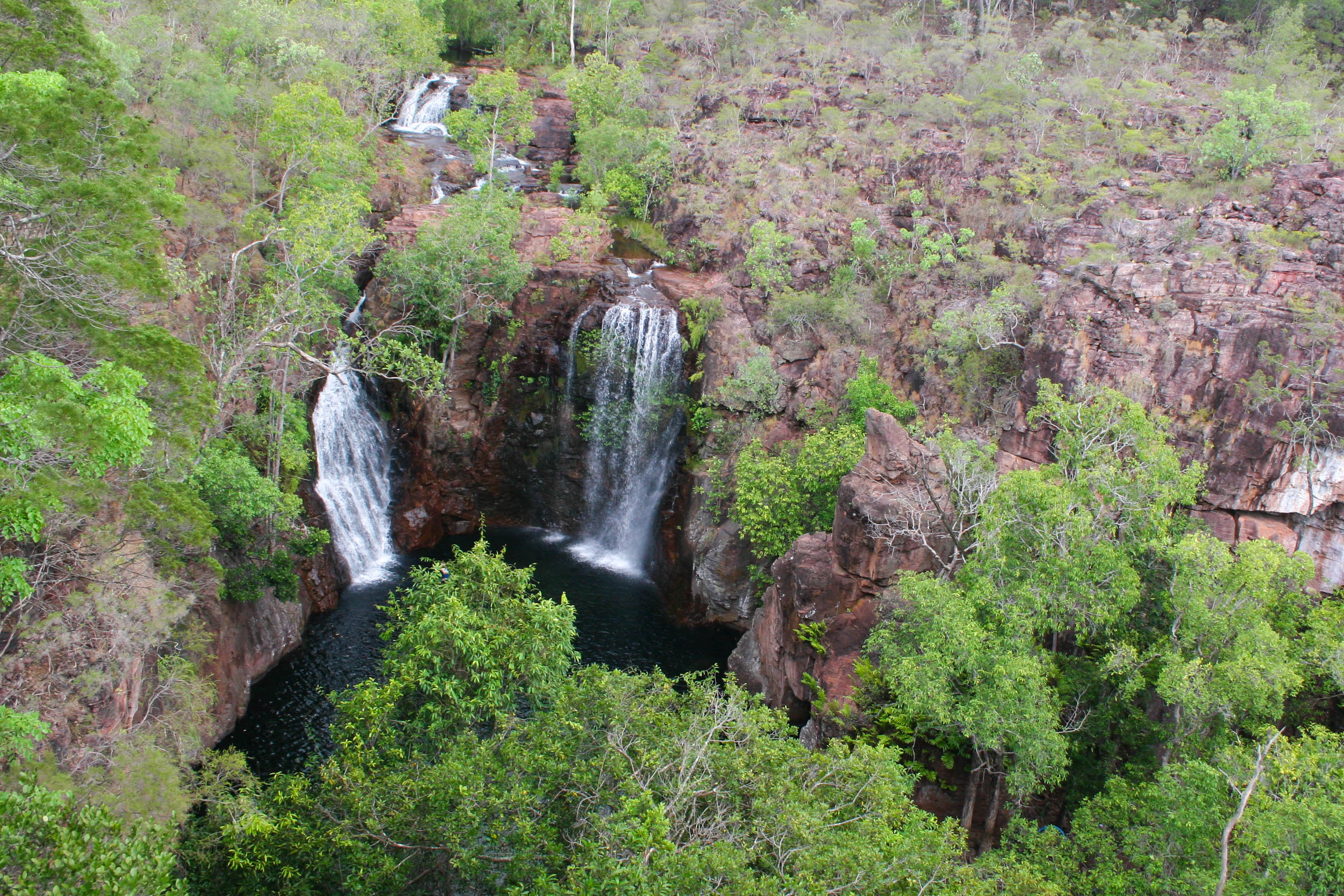 There is a chill in the air. It won’t be long before ads start touting tropical beaches and afternoons in a hammock. But if you are going to venture south of the equator, why not get a bit of adventure along with the tan lines? In Darwin, Australia’s gateway to the outback, you can have your kangaroo and eat it too. Home to sandy beaches and tropical waterholes, Darwin is the hub for adventure tours that navigate through magnificent national parks, cruise through rivers infested with crocodiles, and allow you to get touchy-feely with pythons.

The northern Australian city is the starting point for tours bound for Adelaide River, Katherine Gorge, and Litchfield and Kakadu National Parks. Named after biologist Charles Darwin, the coastal town boasts art galleries, beach markets and fantastic seafood restaurants, but is best known for its wildlife getaways. Tours range from day trips to weeklong escapades in the outback.

The most popular excursions visit either Litchfield or Kakadu, the latter of which served as a location for the Crocodile Dundee films. Both parks are brimming with tropical flora and native wildlife. Highlights include swimming beneath thundering waterfalls, bush walks through monsoonal rainforest, and visits to sacred aboriginal sites. Litchfield can be done in a day, but Kakadu tours take at least two and include overnight camping beneath the stars. 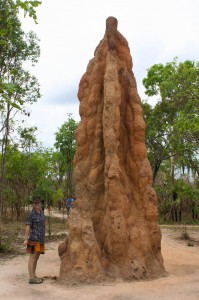 A tour of the national parks isn’t complete without a visit to the termite mounds built by Australia’s famed Magnetic Termites. In order to survive the extreme dry and wet seasons, the tiny architects construct mounds that let them live above the swampy marshes. These fascinating insects can live as long as 25 years and build mounds up to six meters high. Angled towards the sun, the mounds absorb heat during the day and remain insulated at night. While taking a photo next to the “Sagrada Familia” of termite mounds, I stood in awe of the structure three times my height that was created by insects the size of ants. Some of the more ornate mounds are called Cathedral Termite Mounds since they appear to have decorative pillars and buttresses. These productive little critters may be a homeowner’s nightmare, but they are also one of the natural wonders of Australia’s Top End.

The outback is bursting with wildlife. It isn’t unusual to spot kookaburras in the trees, giant Australian monitor lizards drinking at waterholes, and sleeping koalas. Even camels roam freely in some parts of the outback. Most of the native animals are harmless, but not all of them. Australian comedy duo The Scared Weird Little Guys wrote a song about the creatures that inhabit Australia, encouraging folks to “Come to Australia!” where, “you might accidentally get killed.” In the the Australian outback, the danger is part of the draw. 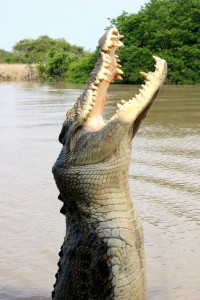 This call of the wild persuaded me to join the Jumping Crocodile Cruise, a boat that putters through Adelaide River and entices wild crocodiles to jump out of the water by dangling chunks of raw beef above their heads. On the desk, next to the tour sign-up sheet was a plastic crocodile figurine with a pair of Barbie legs protruding from its jaws. Newspaper and magazine headlines exclaiming “Croc Attacks Barmaid”, “Man Shoots Mate While Saving Him From Croc Attack” and a number of other bizarre scenarios were plastered across the walls of the waiting room for the cruise. Apparently, easing the anxieties of tourists is not a priority in the adventure business.

As the captain of the ship introduced himself and our vessel, I couldn’t help but notice a sizeable scab between his lower lip and chin. I found out later that, in addition to captaining the cruise, he performs in a wild animal show where he kisses pythons on the mouth. In an especially memorable performance one week prior, one of his serpent friends decided to kiss back.

The cruise was as thrilling as promised. From our open windows, we were mesmerized as the crocodiles leapt almost entirely out of the water to grab the juicy blocks of meat. Wildlife experts will tell you that crocodiles are more prone to quietly stalk their prey than expose their bodies. It took repeated voyages and feeding attempts before they felt safe enough to take the bait. The jumping crocs were a stellar photo opportunity, but the guide warned us not to lean out of the window too far. Crocodiles are quite practical. They will snap their jaws on the closest meat available.

We saw at least six wild crocodiles on the cruise, one of which was missing its arms. Our guide explained that its limbs had probably been bitten off by another crocodile during mating season, in which males often fight over the females. Clearly, crocodile rivalry knows no bounds.

For those who would rather keep their distance from snapping jaws, there is always Crocodylus Park. Only a 15-minute drive from the city, this enclosed wildlife park is a scientific research facility and mini zoo. But the creatures are caged and it’s all a bit tame. The Jumping Crocodile Cruise definitely gives more bite for your buck.