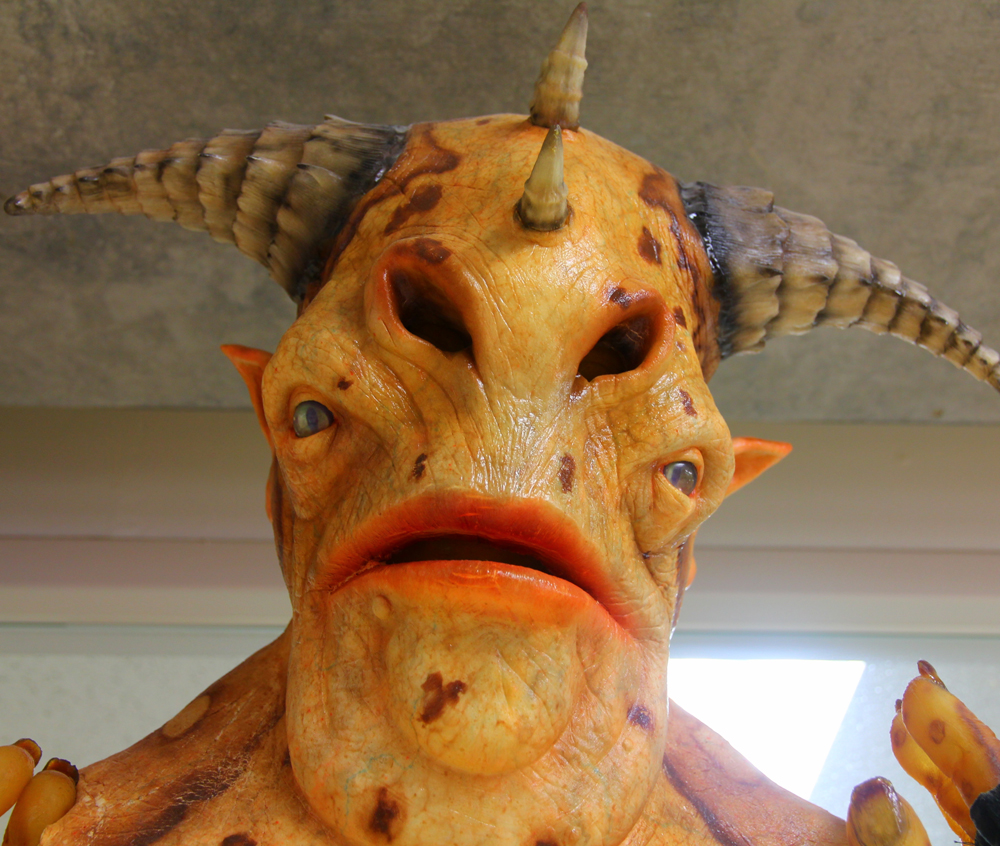 A journey to Susumu Nakatani’s studio is not for the fainthearted. You have to pass through a labyrinth of corridors where eviscerated corpses, rotting zombies and weird dragon-like creatures serve as unmoving sentinels. If you make it past all of these creepy wonders, you end up in the classroom itself, which is a celebration of the macabre, from the decapitated heads on the wall to an egg with an eyeball peering grotesquely out of where the yolk should be.

Of course, if you want to meet a professional horror make-up artist, you really shouldn’t expect anything less.

“I was really inspired by the work of George A. Romero,” Susumu explains as he guides me deeper into this dark world. The Night of The Living Dead director’s influence is especially apparent in Susumu’s recent series of zombie movies for Kansai Television, where he got a chance to create the kind of world his idol created.

“Basically, I am a fan of anything zombie,” he says, as he gestures towards the numerous undead body parts that decorate his studio. “I saw Biohazard and was really inspired by that. I loved what they did… I hope that people get a similar feeling when they watch my movies.”

This love of the art of horror is what keeps Susumu so prolific. He has designed a business card so that it opens up like a booklet to list just the highlights of his filmography. He is particularly proud of his work with Panasonic, bringing Frankenstein to the Japanese fans and doing the make-up to promote Freddy vs Jason. Of the films that his independent film company has produced, he admits to a fondness for his recent productions Psycho, Sun of the Dead and A Wife and the Child are Corrupt. While he admits that his love of foreign films inspired these films, he is also keen to stress that every scene inspires him, including Japanese cosplay and anime scenes. He is especially glad that Halloween is coming up, as one of the key things that he noticed from both of these subcultures is the carefree way that they enjoy this festival. “Whenever I have a Halloween event, I am happy when people turn up wearing costumes,” Susumu explains. “I love the costumes and I often hold Halloween events for cosplayers where students from my schools can give them help with make-up and effects.”

While Susumu is the first to admit that his film company has a long way to go before it attracts the kind of commercial success that Eli Roth and Sam Raimi enjoy, his make-up has caught the attention of the Hollywood make-up community. In his studio, there’s a private room covered in pictures with the famous people who have dropped in to help his school out. The first picture is Kenny Myers who did the make-up for Pirates of the Caribbean: At World`s End and The Prestige. Next to him is Jordu Schell, who designed the creatures for the world of Avatar. Finally there is a picture of a man who looks like a special effect himself. Known better as Screaming Mad George, horror lovers will instantly recognise his work in the Predator series, and for bringing Freddy back for his fourth haunting of Elm Street. Susumu’s face opens up into a huge grin as he talks about their visits. “I like to bring in these guests to meet my students. It is also nice for them (the American artists) to see what is going on here,” he says. “I love it when my students can meet some of these talented people and be inspired.”

Of course no horror master would be complete without his legion of minions, and training the next generation of make-up artists has always been a big part of Susmu’s plans. When ECC recently opened their Artists and Make-up specialist school, Susumu was able to work with them to create a course teaching talented young artists to embrace their darker side.

“I am sure that all of my students will go on to become professionals,” He says, gesturing at a desk covered with student coursework, namely latex heads and characters inspired by the recent Men In Black movie. “Of course, some will work in horror and special effects companies, but there are other related jobs out there. Often our students work alongside USJ, especially on their Halloween productions. Others make the fake plastic foods you see outside restaurants, or create the wounds and scars used in Pro-Wrestling matches. We train them well, so that they can do a lot of different jobs.”

To help raise awareness of his school, and give students a place to showcase their skills, Susumu hosts an annual contest. Though it started off small, his Halloween Special Live and Special Make-Up Contest has grown into a big attraction for horror and costume fans thanks to its freedom of expression and carnival-like atmosphere. Students compete using make-up and live performances at the event to win one of the medals that Susumu makes. While other Japanese make-up events may stress the family-friendly over the horrific, Susumu is keen to stress that this will be the real, gory, thing.

“After experiencing American Halloween parties, I became fascinated by how different they are to the Japanese model,” Susumu explains as he looks through photos of the event’s previous successes: kimo-kawaii maids splattered in blood and an axe-wielding demon. “Foreigners seem to really get into monsters and Halloween parties, and they love to be truly scared. I wanted to bring some of the feel of those parties and events to Japan. I guess I am making something like a horror festival but with a big mixture of ideas from around the world. Basically, I want to create a party atmosphere where the crowd can show off their costumes, get some scary make-up done, or just enjoy watching our performances.”

Susumu thinks that Halloween events are more common in Tokyo, so it’s about time Kansai got in on the act. “Until now, Osaka has mostly hosted beauty or cosmetic events. These are good, but they don’t really capture the spirit of creative make-up, which can be used for Halloween. I hope that everyone can get into the spirit of this new kind of event and enjoy being scared. I have a vision that lots of people will come and support all our productions. I can promise that there will be something at my events for everyone: friends, couples, Mom and Dad and even the kids too.”

If they can brave it past the entrance, perhaps…

[box]Halloween Special Live and Special Make-Up Contest
ATC, Osaka, Oct 28
Susumu and his students are transforming the ATC building into a gory celebration of the undead and everyone’s welcome. The event can be accessed from the Trade Center Mae station. To get here, take the Chuo line to Cosmo Square station and then transfer to the New Tram.[/box]

Continue Reading
Advertisement
You may also like...
Related Topics:halloween, made in kansai, susumu nakatani