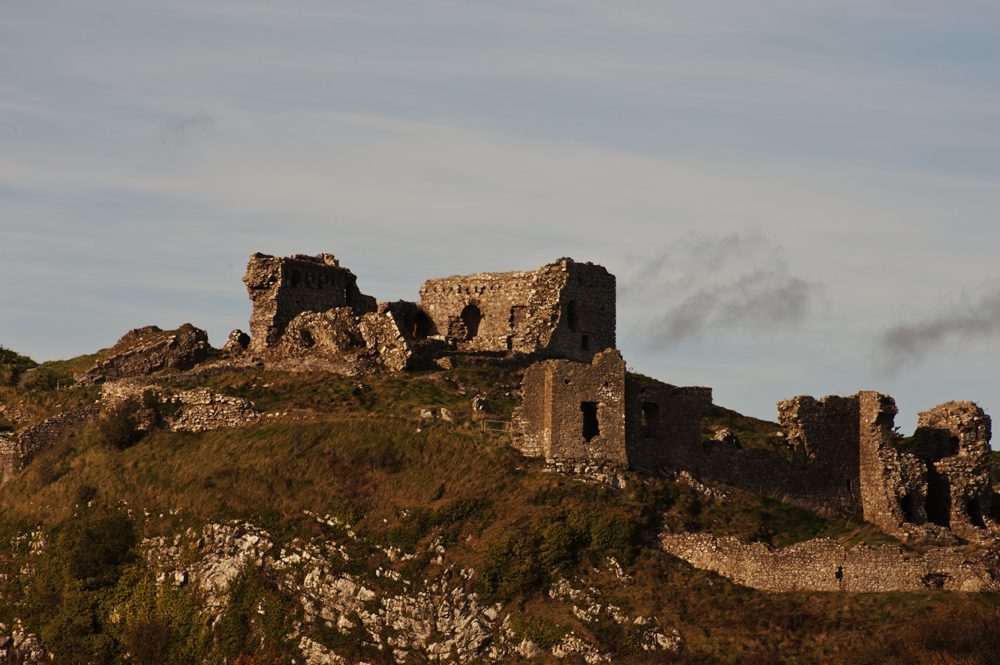 In the dusk of the high chamber known as the Bloody Chapel, my heart beats loudly against the gloom. Slivers of light steal hesitantly through the thin, ancient windows, illuminating slices of the hall, casting the rest into shadow. Above me, ancient stone walls vanish into darkness.

Stories I lost sleep over in childhood send prickles of fear along my spine. I imagine the spirits said to haunt this ancient tower house: the ghost of a priest killed by his brother while saying mass in this very room; the tall, unknown woman in a scarlet gown; the bloodstain that can never be scrubbed clean; and the terrifying spirit of an elemental called forth by misguided dabbling into the occult.

Not for nothing is Leap Castle, built in the 14th century as the stronghold of the O’Carroll clan, thought to be the most haunted place in Ireland. Said to have been built on a Druidic site, the castle is famous for its bloody history of fratricide, murder, and intrigue. During restoration work in the early 20th century, a full three cartloads of human bones were removed from Leap’s dungeon. Weirdly, it feels peaceful. Perhaps on All Soul’s Day even the most troubled spirits rest. Downstairs, the castle’s current owner, Sean Ryan is talking history with a group of American visitors, descended, like me, from the Anglo-Irish family that succeeded the castle in the 17th century.

[box]Halloween: A history
The end of October was once marked by the Gaelic feast of Samhain, a harvest celebration that presaged the turning of autumn into winter. Bonfires were lit, and people wore masks to disguise themselves from the spirits which were believed to walk freely on that night. Turnips, carved into lanterns, were placed in windows to ward off evil spirits. When the Christian holy day of All Souls, or All Hallows, was fixed on the first day of November in the 8th century, Samhain became All Hallows’ Eve, or Halloween.[/box]

Behind the ivy-covered keep and crumbling walls, the low, darkly forested hillsides of the Slieve Bloom Mountains disappear into the overcast day’s low clouds. It is not hard to imagine that this is the land of the banshee, of fairies. Below the clouds lies a rounded, ancient landscape. Ireland is a country worn smooth with years of weather and history, heavy with a past that is still somehow so present.

My visit is on the cusp of the Celtic seasons, where light fades into dark and night falls in the afternoon. Four short days is enough for only a taste of a country: two days in Dublin at either end, a day in Galway, and a day exploring the countryside between, but I’m making the most of them, vaguely tracing a thread of my family history, visiting friends and pubs and scenery along the way.

In Dublin, it rained. A steady downpour soaked down from grey skies, beating fallen yellow leaves onto the pavement. The rain drives me to Trinity College where—as it seems, as everywhere in Ireland—religious tensions and history rub close against each other.

Inside the elegant long room of the old library, under the upward curve of the barrel-vaulted ceiling, we marvel over antique manuscripts in glass cases. The most famous of these is the extraordinary Book of Kells, a 9th-century illuminated manuscript of the Christian Gospels. Created at the time of Viking raids, the book’s intricately illuminated vellum pages have weathered the centuries gracefully, with abstract Celtic patterns and mythical beasts dancing in vivid colours across its ancient pages.

The rains lifted by the evening, and friends took me to sample some of Dublin’s pubs. At the Stag’s Head, a crowded, comfortable place whose eponymous attraction adorns the main bar, I sampled a couple of perfectly poured pints of stout.

On the last day of October, I headed over the high peat bogs to the west of Galway at the edge of Connemara. The somehow wild landscape stretches up to the wide sky here. A lone, bare house stands at the narrow roadside like something out of a gothic novel. The road winds down to the rocky coast at the tiny village of Spiddal, and follows the edge of the sea into Galway, which I reached at sunset.

In Galway, Halloween is celebrated with costumed revelers and plenty of music. I find myself at the crowded bar of a cosy little pub. Ordering stout, I hear, for the first time, Irish being spoken. A group of musicians play traditional tunes in the corner by the window. Soon toes are tapping, and dancing breaks out spontaneously on the tiny floor. Drinkers squeeze up against each other to give the dancers space. An old man strikes up a conversation, but his accent is so thick, and the music so loud, that I eventually give up talking, and let the music take over, washing me away.

On Halloween, it’s said that the world of the supernatural brushes closely against this one, just as the ghosts of Leap Castle are sometimes said to brush against visitors. Walking back to the hotel, through the midnight dark yet busy streets, with the music still ringing in my ears, and dancing figures playing like firelight after-images across my eyes, it drunkenly occurs to me that perhaps we are the haunting spirits. Returning to ancestral lands, as we have over a few brief and liminal days at the turning of the seasons, perhaps we, too, haunt our forebears on nights like these.

[box]Ways & Means
Getting there and away: There are no direct flights from Kansai to Dublin, but plenty of one stop connections with European airlines
Where to stay: www.goireland.com for local hotels and B&Bs
Resources: www.discoverireland.com[/box]