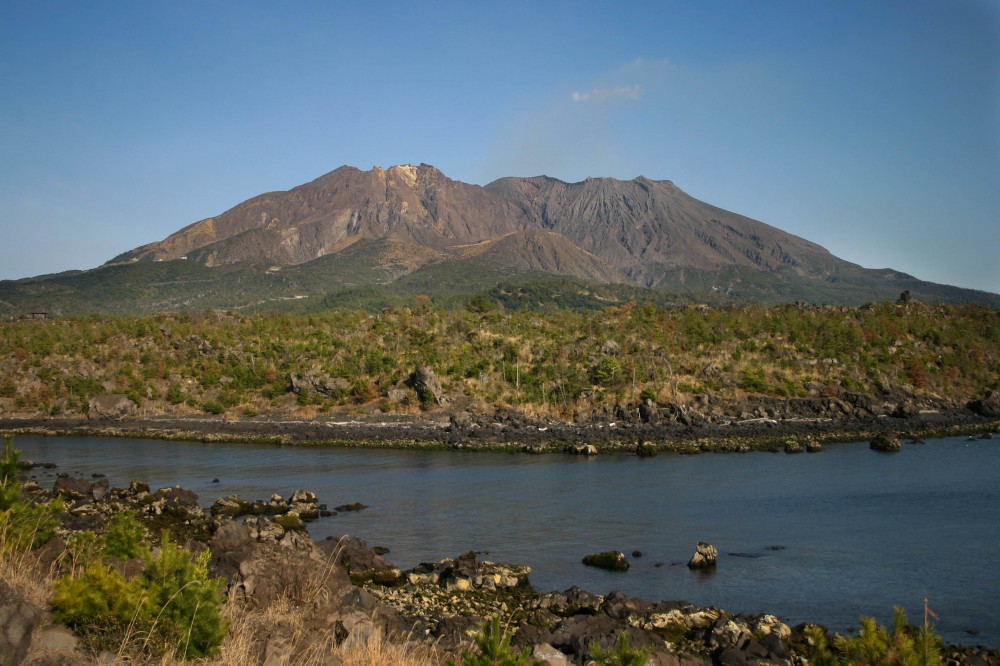 In an attempt to be adventurous and face my fears, I decided to spend a night at the foot of a volcano. To be fair, the 5,000 residents of Sakurajima also spent the night beneath the smoking cone. You can imagine my anxiety when I woke up to an eerie grumbling the next morning. I glanced out the window to see smoke pouring out of the top of Sakurajima.

Even more shocking than the billowing cloud arising from the mountain was the lack of concern among the locals. Apparently they’ve become so accustomed to the smoking habits of their volcano, that what I feared was a sign of apocalyptic doom was for them simply a reason to break out the dust rags.

With thousands of minor eruptions each year, Sakurajima is one of Japan’s most active volcanoes. Both feared and loved by local residents, this symbol of Kagoshima is a major tourist draw and a valuable specimen for scientific researchers.

From across the bay, the billowing cloud of greyish white constantly hovering above the summit serves as a reminder that although Sakurajima is magnificently beautiful, she is not altogether predictable. But the cliff-side onsens, dazzling ocean views, glorious hiking and the thrill of being in the shadow of such an impressive natural power make a day-trip worth the risk.

Made up of three mountain peaks, Sakurajima is a composite volcano and a former island (hence the name “Cherry Blossom Island”). Its last major eruption was in 1914 after a series of earthquakes. Fortunately, seismologists predicted the outburst and the area was completely evacuated by the time the lava began flowing. The Sakurajima Visitor’s Center has displays explaining how that lava connected a few meters of the island to the Osumi peninsula, though the majority of the former-island is still surrounded by ocean. On the eastern shore, the Kurokami Shrine, a 3-meter structure of which only the crossbeam is still above ground, serves as a reminder of the effects of the 1914 eruption.

Minor explosions in recent years have caused no significant damage, though the ash can be a nuisance. But the fact that several thousand people currently inhabit the former-island, not to mention the 680,000 who live a mere four kilometers away in Kagoshima, makes Sakurajima hazardous enough to merit special attention. In 1990, the International Association of Volcanology and Chemistry of the Earth’s Interior (IAVCEI) chose 16 volcanoes for scientific observation due to their proximity to populated regions and history of destructive eruptions. Sakurajima was one of these “Decade volcanoes”.

For safety and convenience, a 24-hour ferry travels between Kagoshima and a port on the western shore of Sakurajima. From the terminal, head first to the Visitor’s Center for some insight into the island’s history. Among the displays is a seismograph that acts as a scientific “mood ring” for the volcano’s temperament. After immersing yourself in volcanic jargon, head to the Nagisa Lava Trail. It’s a terrific hike through the heart of a lava field and back along the seashore. Although only a few kilometers long, it gives walkers and cyclists the feeling that they’ve been transported to a prehistoric land. This impression is only reinforced by the amusing Sakurajima Dinosaur Park just minutes away from the trailhead. The massive fiberglass brontosaurus poking its head above the trees is quirky photo op, while the 12 meter slide is thrilling for children and adults alike. Nearby, the 100-meter-long Yogan Nagisa Park footbath is perfect for soaking tired feet.

No visit to a volcano is complete without getting as close to the steaming crater as is permitted. Of the three main observation points on Sakurajima, the Yunohira Observatory is the easiest to access and the closest to the summit. About halfway up the mountain, this lookout point offers a magnificent view of the summit and the terrifying smoke pouring from its peak. If the weather is clear, you can look in the opposite direction for a beautiful view of the bay and the city of Kagoshima. The Sakurajima Island View Bus, which services Yunohira Observatory, also stops at Akamizu View Park, where you can see the bizarre memorial entitled, “Portrait of a Scream.” Built to commemorate Kagoshima native Tsuyoshi Nagabuchi’s All-Night Concert that took place there in 2004, the sculpture shows a screeching face protruding from the surrounding rubble. The unsettling image is almost as disconcerting as the idea of 75,000 people attending a concert at the base of an active volcano.

To finish off the journey, head towards the Furusato Onsen on the south side of the island. It’s inside the Furusato Kanko Hotel, but open to the public. Visitors can bathe in the sacred Ryujin (“dragon god”) bath. It’s a mixed onsen, but out of respect to the deity, both women and men are required to wear the white yukata provided by the hotel. Bathers can relax in the shade of a 200-year-old camphor tree while enjoying a panoramic view of Kinko Bay.

Despite its oppressive appearance, this smoking giant is a celebrated source of pride among locals. Shops are filled with chocolates, senbei, and plush toys bearing the image of Sakurajima. These little souvenirs are a perfect gift for any colleagues afraid to get a little ash on their collars.

[box]Ways & Means
Osaka to Kagoshima:
Kagoshima is accessible by air from KIX, Itami Aiport, and Kobe Airport or by shinkansen.

Spirited away by Ireland’s charm
Mt. Hiei: sacred home of the Tendai monks