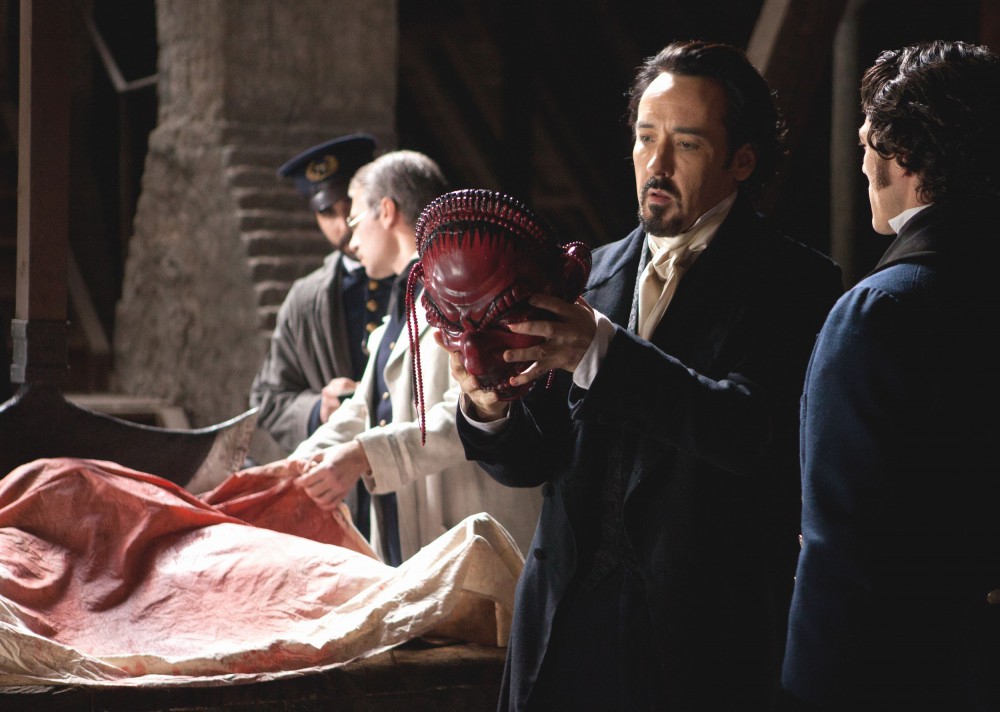 If you fancy some Halloween chills of an old-school nature, Edgar Allan Poe isn’t a bad place to begin. The American writer is best known for his dark tales of grisly deaths, but he’s also credited with the invention of the detective genre, and it’s the blending of these two that inspired this movie.

A detective called to a crime scene thinks it rings a bell with Poe’s short story Murders in the Rue Morgue, where two women have been murdered by something not-quite human, leaving one almost headless and the other stuffed inside a chimney.

He decides to bring Poe in for questioning, but Poe is pretty useless right now, as he’s a penniless drunk wandering the streets and longing to be with his lover Emily.

A second murder takes place, this time inspired by The Pit and The Pendulum. It helps if you have a knowledge of Poe’s stories, but all you need to know about this one is it involves a cell that has a deep pit below and a sharp, slowly descending blade swinging overhead. At the time it was published, this story was popular for its lack of supernatural elements; the narrator focuses on the sounds, smells and feelings of a real-life situation to share his terror, so expect that to be reflected onscreen.

While the detective is scratching his head over the latest murder, pretty Emily is threatened. Now Poe has good motivation to sober up and figure out who the killer is, why he’s doing the deeds and how to stop him.

It may be useful to know that Poe’s titular work here, The Raven, was published in 1845, just four years before Poe died. It’s a poem about a man who is visited by a spooky raven, that can only croak the word ‘Nevermore’ at him. Poe himself had a mysterious ending in real life; he was found wandering the streets of Baltimore in someone else’s clothes, delirious and needing a hospital. The cause of his death is still unknown.

A good blend of gothic fiction and fact from the director of V for Vendetta, and a solid lead in John Cusack, this would make a thrilling start to any Halloween weekend.

Continue Reading
Advertisement
You may also like...
Related Topics:film, the raven