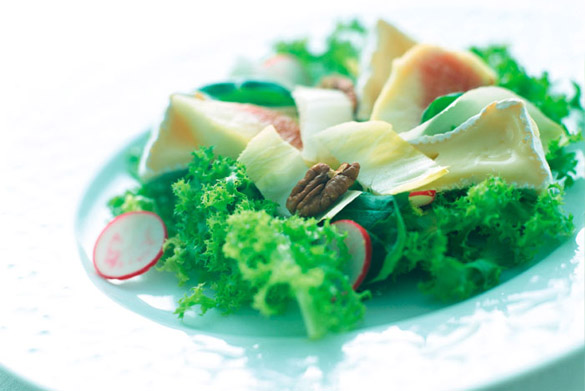 We all know that rather than following restrictive and regulated diet rules, the common sense approach to losing weight is simply to eat healthily and exercise everyday. I’m no diet expert, in fact I’ve put on about 4kg over the last few months by eating too much limited edition chocolate (Melty Kisses are just so tasty!), but I do believe that when you eat healthier food, you feel better in yourself and your body smiles from the inside. When I feel like I’ve over indulged I always turn to a macrobiotic meal to make me feel better.

The word Macrobiotic comes from Greek; macro meaning long, and biot meaning life. It’s all about being sensitive to the effects that food has on our mind and body by eating a balanced diet that uses a variety of ingredients.

The approach is to eat small, colourful portions of fresh, seasonal, and locally produced foods, avoiding those that are highly processed, refined, or produced from animals. This means that most macrobiotic food is suitable for vegetarians, and sometimes for vegans too! The standard ingredients of macrobiotic meals are whole grains, soy and vegetables.

It’s no surprise that eating well powerfully affects your health, and there’s a lot of research to support the theory that macrobiotic eating can help to prevent and even potentially cure lifestyle illnesses, such as diabetes and cancer.

It’s thought that the macrobiotic way of eating started in Japan. Its roots can be traced as far back as the Edo period when Japanese peasants weren’t allowed to eat meat so lived on a diet made up primarily of rice and soybeans to give them protein. It’s for this reason that most macrobiotic recipes include standard Japanese cuisine ingredients.

Many Asian foods are considered to have both a yin and yang property, with one of them being more dominating. It’s believed that it’s best to have yin and yang at a balance to achieve health, as a balance restores and sustains your spiritual energy, your ‘Ki’. Macrobiotic food strives to keep this balance. For example, tomatoes, peppers and potatoes (among other vegetables) are rarely used because they are considered too yin.

The Western fast food influence is gradually expanding across Japan. In fact, Japan comes only second in the world to the USA for number of McDonalds restaurants. With fears that growing waistlines and lifestyle diseases will soon sweep the nation, it’s about time that macrobiotic food is re-introduced to Japan. Indeed it has recently become a popular trend amongst (but not exclusive to) ladies-that-lunch, who meet up for a gossip and to eat a healthy meal at the many macrobiotic restaurants and cafes that are popping up across Kansai.

Superstar Madonna is such a fan of macrobiotic food that she employed Japanese cook Mayumi Nishimura for seven years to cook for her at home and on worldwide tours. In fact Nishimura, now 56 years old and still looking incredible, has since become a bit of a celebrity herself, taking part in many media interviews and publishing several books on macrobiotic food.

Actress Gwyneth Paltrow is another spokesperson for macrobiotic foods. She originally started her strict dedication to macrobiotic food to help her dying father when he was diagnosed with throat cancer. Other celebrities that have been very open about em-bracing a macrobiotic life style include Yoko Ono, Barbra Streisand, John Travolta and Nicole Kidman.

Why not try adding macrobiotic elements to your lifestyle to see if it works for you? A quick Google will bring up an array of simple macrobiotic dishes to try at home, and because of the Asian influence most ingredients can easily be found on your doorstep. Or check out the easy recipe opposite, and our guide to eating out macrobiotically. While you’re visiting macrobiotic restaurants, look out for information on macrobiotic cookery classes. 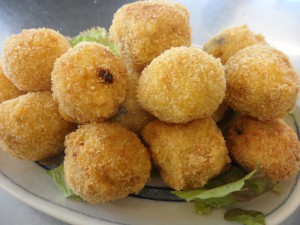 To make around 10 you’ll need:
• 200g brown rice
• ¼ of an onion
• 50g breadcrumbs
• Pinch of basil
• Pinch of salt and pepper
• Oil for frying
1. Cook the rice in a rice cooker
2. Meanwhile cut the onion into small pieces and fry
3. Mix the rice, onion, salt, pepper and basil in a bowl
4. Take about a handful of the mixture and using your hands roll into a ball. Continue with all of the mixture
5. Roll the balls in breadcrumbs until they are fully covered
6. Shallow fry until golden brown
7. You can remove 100g of the rice and replace with seasonal vegetables of your choice, for example butternut squash, pumpkin, peas, broccoli or chickpeas. Be sure to cook them first and add them to the mixture in step 3. 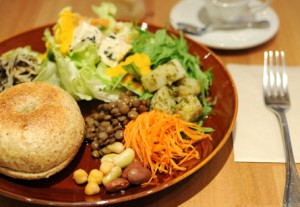 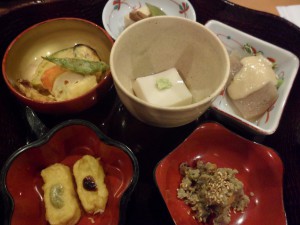 116 Nami-bun, Iwade, Wakayama / 07-3663-5363 • Opening hours: 12pm–3pm/ Closed on Sundays
This restaurant is set in the home of cook Yuka Nakano. At lunchtimes this charming traditional Japanese home with a modern interior is turned into a cosy restaurant where beautiful lunch sets are presented for around ¥1,500. This restaurant is reservation only, and is best visited with a Japanese speaker.

http://atl-cafe.com
• 1-24 2F, 2-chome, Chuo-ku, Osaka-shi, Osaka/Tel: 06-6212-0066
• Opening hours: 11:30am-midnight
This cafe has a touch of European in-fluence and they serve wonderful fresh whole wheat bagel sets at lunchtime, a rarity in Japan! The cafe is on the 2nd floor, a 3-minute walk from Shinsai-bashi station, and the big windows allow you to people-watch from one of the most interesting areas of Osaka. Sets cost between ¥850-1,000.

Search www.happycow.net for more macrobiotic restaurants in your area.
[/box]

Hidden wonders of home
A centenary of song