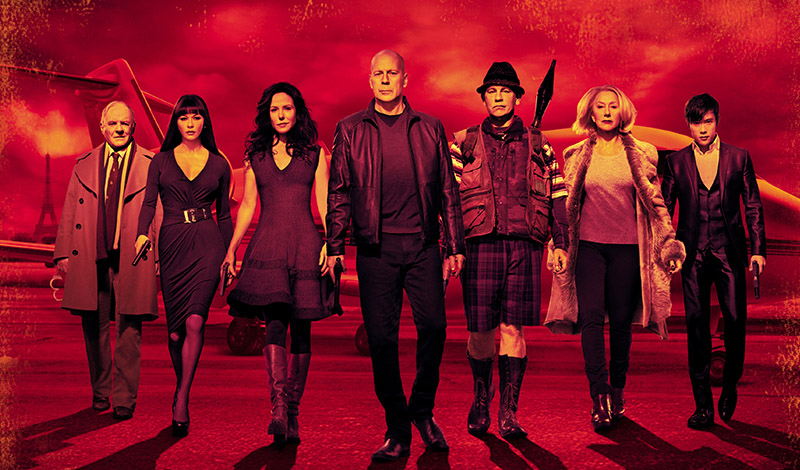 In recent years, the more obscure comic book series have hit the big screen with varying success, from Kick Ass to Scott Pilgrim vs The World, but whereas those franchises may be speckled with stars like Cage, Carrey or Cera, 2010’s Red threw together some of the biggest actors around today. Although The Expendables boasts an even longer list of big-hitters, they are there for decoration and variations on the formula of punching a bad-guy in the face; the “Retired and Extremely Dangerous” portrayed by Willis, Malkovich, Freeman and Mirren on the other hand were actually characters an audience could genuinely like and care about.

In Red 2, Frank Moses (Willis) has retired… again, but whereas the first film saw him stewing in the boredom of his autumnal years, it is now his better half, Sarah (Mary-Louise Parker), who is craving a little excitement, while Frank is happy shopping for BBQ grills in Costco. Thankfully, the film doesn’t dwell on the “one last job” clichés for very long, and it is within the first 10 minutes or so that Frank is drawn back into the action.

Willis had Freeman to bounce off of in the original Red; their friendship making them both more relatable. But (spoilers if you haven’t seen the original) although there is a Joe-shaped hole in the narrative that is difficult to fill, Malkovich is given more room to chew the scenery, while Mirren and Parker are really let off the leash as they both (to varying extents) hold their own against their dominantly male counterparts.

The characters may be a little more rounded this time around, but there is no distracting from the narrative, which is so standard Frank could have picked it up with his BBQ at Costco. The band must get back together to track down a portable nuclear device while avoiding attention from both sides of the law. Nonetheless, the film is fun, fast and undeniably entertaining.

Continue Reading
Advertisement
You may also like...
Related Topics:action, comedy, Kick Ass, The Expendables, The World