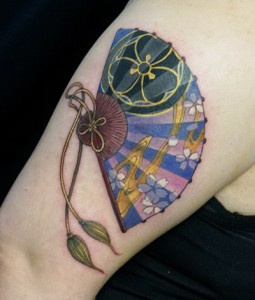 Where are you from, and what brought you to Japan?
I’m from Minneapolis, Minnesota where I was studying Japanese language at university. I made my first trip to Japan in 1999. It sounds silly in the Information Age of smartphones and infinite connectivity, but at the time it was absolutely mind blowing. It was so completely different to anything else I had ever experienced. I had begun work at a graphic design firm in the U.S., but that Japan trip kept gnawing at the back of my brain. It became an itch that I couldn’t scratch, and so I surreptitiously planned my move to Japan. I lived in Kagoshima for two years but moved to Osaka shortly after to pursue a career in tattooing. 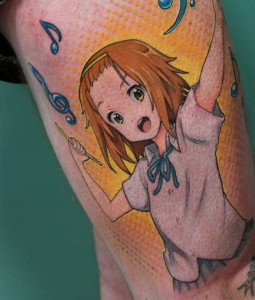 How did you get your start tattooing?
I had a lot of tattooer friends in the U.S. and always enjoyed hanging out at the local shop talking with the artists and learning about drawing from them. But I had absolutely zero interest in tattoos or tattooing! Anyway, when I came to Japan I was teaching English, just like everyone else. After nearly two years of it I longed to return to some kind of creative work, so in 2004 I began a tattooing apprenticeship.

What made you decide to open your own shop?
Necessity. I’m an extremely particular person and I have my own way of doing things. I spent a decade working for someone else and spent the majority of that time concocting my own recipe for an ideal tattoo shop.

What is the biggest challenge of running a tattoo shop in a country with such a tattoo taboo? Does being foreign make it easier or harder?
Well, as a foreigner there are necessarily visa hurdles. Climbing over these requires time, patience, and most of all money. Exasperating red tape. I’m used to dealing with the little tattoo taboos here and there. If I had to name a “biggest challenge” I would say it’s convincing average folks to take tattooing seriously as an art form, profession, and way of life. Many Japanese are simply not yet aware of their own long and proud tattooing traditions. Nor are many of them aware just how large of an institution tattooing has become in the West. Most of my customers are Japanese, though. I would say that I probably have more foreigner clients than other tattoo artists here, but it still accounts for less than 10 percent of my clientele.

Is the Japanese tattoo culture changing? If so, how?
As far as a general interest in tattooing is concerned, 15 years ago it seemed that tattoos were headed for wider acceptance in Japan, but I think it’s actually moving in a far more conservative direction. There are less young people, those people have less money, they certainly don’t want to risk losing their jobs over it, etc. Still, there is a far more liberal attitude among tattooers that is leading to more diversity in style and I think that’s a good thing.

[box]
*Hori means “to carve.” It is a Japanese honorific similar to “sensei” or “san” but is placed in front of the name rather than behind it.

Continue Reading
Advertisement
You may also like...
Related Topics:tattoo

Wabori: Getting Under the Skin
Sipping Sake on the Nada Brewery Trail