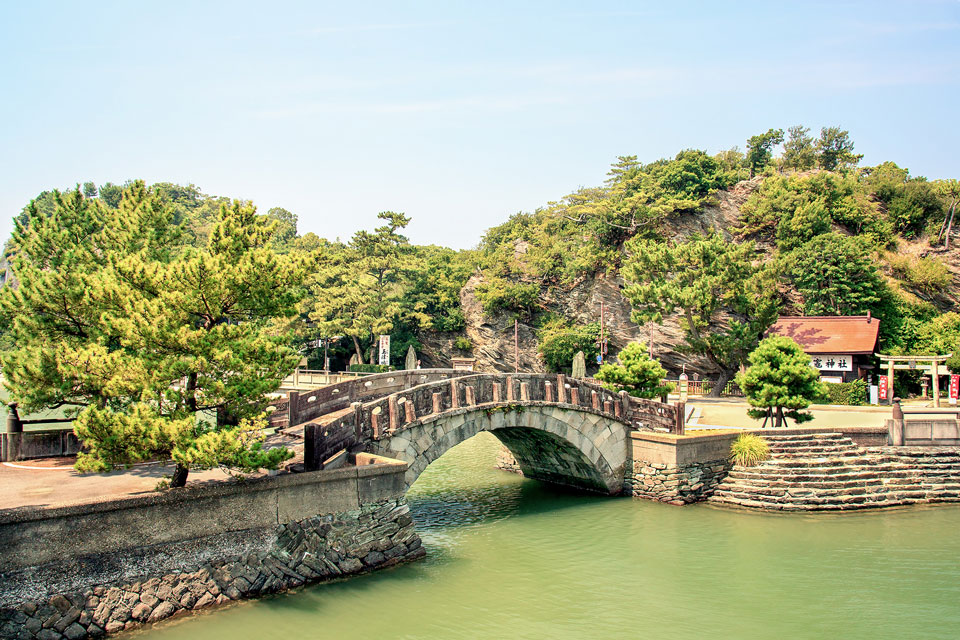 In 724, Emperor Shomu made a trip to Wakanoura and was delighted. Back then, he would have seen six small islands sitting in the bay known collectively by the old name Tamatsushima, which conjures up the image of a string of jewels floating on the surface of the water. Though the landscape has changed since olden times, you can still experience its history and charms and, with a little imagination, catch a glimpse of its past splendor. 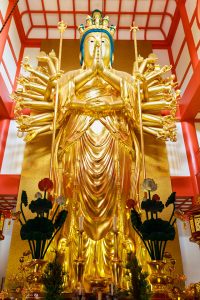 Kimiidera Temple, sitting on the slopes of Mount Nagusa, is a good place to start. Number two on the Saigoku Kannon Pilgrimage, it was founded over 1,200 years ago by the monk, Iko, who made the arduous journey from China. The temple is famous for its early-blooming cherry blossoms and for its sparkling new image of Kannon, the Buddha of mercy, which at nearly 12 meters tall, is the largest standing wooden Kannon statue in Japan. If you wish to see the temple’s principal Kannon image, a wooden statue said to date back to the founder, you will have to wait until 2020 as it is a hibitsu – a hidden Buddha – displayed only once every 50 years.

The temple also affords a sweeping view of Wakanoura Bay. If you look carefully, by the town’s edge near where it meets the water, you will be able to see a small pagoda on a tiny island. This is Imose Yama, the only remaining island of the original six. The wooded hills stretching beyond it were once the other islands of the group.

Imose Yama looks much like it did when the famed artist Hiroshige made a woodblock print of it more than 150 years ago. The approach to the island is still made by the Sandankyo, a low, stone bridge modeled after a famous bridge at China’s West Lake, which was commissioned by Tokugawa Yorinobu (1602–1671), the 10th son of Shogun Tokugawa Ieyasu and founder of one of the three cadet branches of the Tokugawa family, who ruled the Kishu Domain from nearby Wakayama Castle.

Yorinobu’s legacy can be strongly felt on the island. On the far side is the Kankaikaku, a pavilion used for viewing Mount Nagusa and Kimiidera. The current structure is a concrete copy of the original wooden one attributed to Yorinobu. Behind it stands the weathered Kaizenin Pagoda, which Yorinobu erected in memory of his mother. 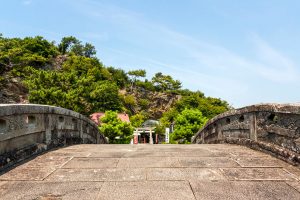 The iconic Furobashi, an arched, stone bridge built by Tokugawa Harutomi in the mid-19th century is nearby, and across from it is the modest Shiogama Shrine. A little further along, lying between two hills, is the Tamatsushima Shrine. Long a pilgrimage site for poets, it enshrines several deities including one of the three gods of poetry. On the grounds of the shrine are a few monuments inscribed with famous poems praising the beauty of Wakanoura. The hill behind the shrine was once home to a curious attraction: one of the earliest steel elevators in Japan, which novelist Soseki Natsume immortalized in his novel, The Wayfarer, and which took visitors up to the rocky hilltop.

The canal by the road leads to the Mitarai Pond and behind it, partway up Mount Tenjin, stands the grand gate of the Wakaura Tenmangu Shrine with a wall of crude stairs leading up to it. Hanging in front of the elaborate shrine are numerous votive plaques communicating the prayers of students for success on their exams as the shrine is dedicated to Tenjin, the god of learning. According to the shrine’s history, Sugawara Michizane (845–903), the Heian statesman who was deified as Tenjin after his death, was forced to stop here on his way into exile due to unfavorable weather conditions and was moved by the scenery to compose a couple of poems.

On the neighboring hill is the Kishu Toshogu Shrine established in 1621 and dedicated to the spirits of both Tokugawa Ieyasu and Yorinobu. One-hundred-and-eight steep stone stairs, representing the 108 earthly desires of Buddhist doctrine, lead up to the vermillion gate. When you reach the top, you will be greeted by a small, richly-painted shrine with an earth-colored, thatched roof blending in with the green leaves of the trees behind it. It is easy to see why it is known as “the Nikko of Kansai” (in reference to its similarities to the main Toshogu Shrine at Nikko in Tochigi prefecture). 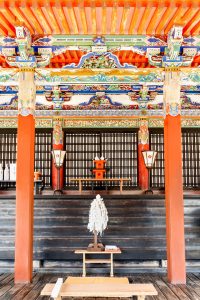 If you understand Japanese, it is worth paying the small fee to have a shrine attendant give you a short tour pointing out the exquisite carvings attributed to the legendary sculptor Hidari Jingoro, such as the pair of tigers. The forward-facing tiger symbolizes the human need to look towards the future; the rear-facing tiger reminds us to look back and reflect on the past. The shrine is also adorned with paintings by artists of the illustrious Kano and Tosa Schools.

Every year the Waka Festival, once known as one of the three great festivals of Japan, takes place in Wakanoura in mid-May. The festival originated from the Toshogu Shrine festival, which started in 1622. The main attraction is the Mikoshi Oroshi during which a group of men clad in white carry the portable shrine containing the spirit of Tokugawa Ieyasu down the steep stairs. Shouting energetically, they raise, twist and tilt the shrine as they make their way down accompanied by gongs and bells.

During the festival, the past comes alive as a large procession of nearly 1000 men, women and children, in unique period costumes, parade through the streets of Wakanoura and perform for the spectators. Among them are sumo wrestlers, court ladies, samurai warriors, musicians, and dancers.

When it is time for you to leave Wakanoura, you may find that you feel like the ancient Fujiwara poet, Manyoshu, who wrote, “Never tired of gazing at Tamatsushima, I ponder how to wrap it up and take it back with me, for those who have not seen it.” (Manyoshu 7.1222)

Wakayama City Tourist Association
wakayamakanko.com/eng
Wakayama is famous for chuuka soba (中華そば ramen). There are a couple of options in the Wakanoura area, but there are more options near JR Wakayama Station.
Download a ramen shop map at wakayamakanko.com/eng/map/img/ramenmap.pdf
This year the Waka Matsuri will be held on May 15. For more info, visit wakamatsuri.com.