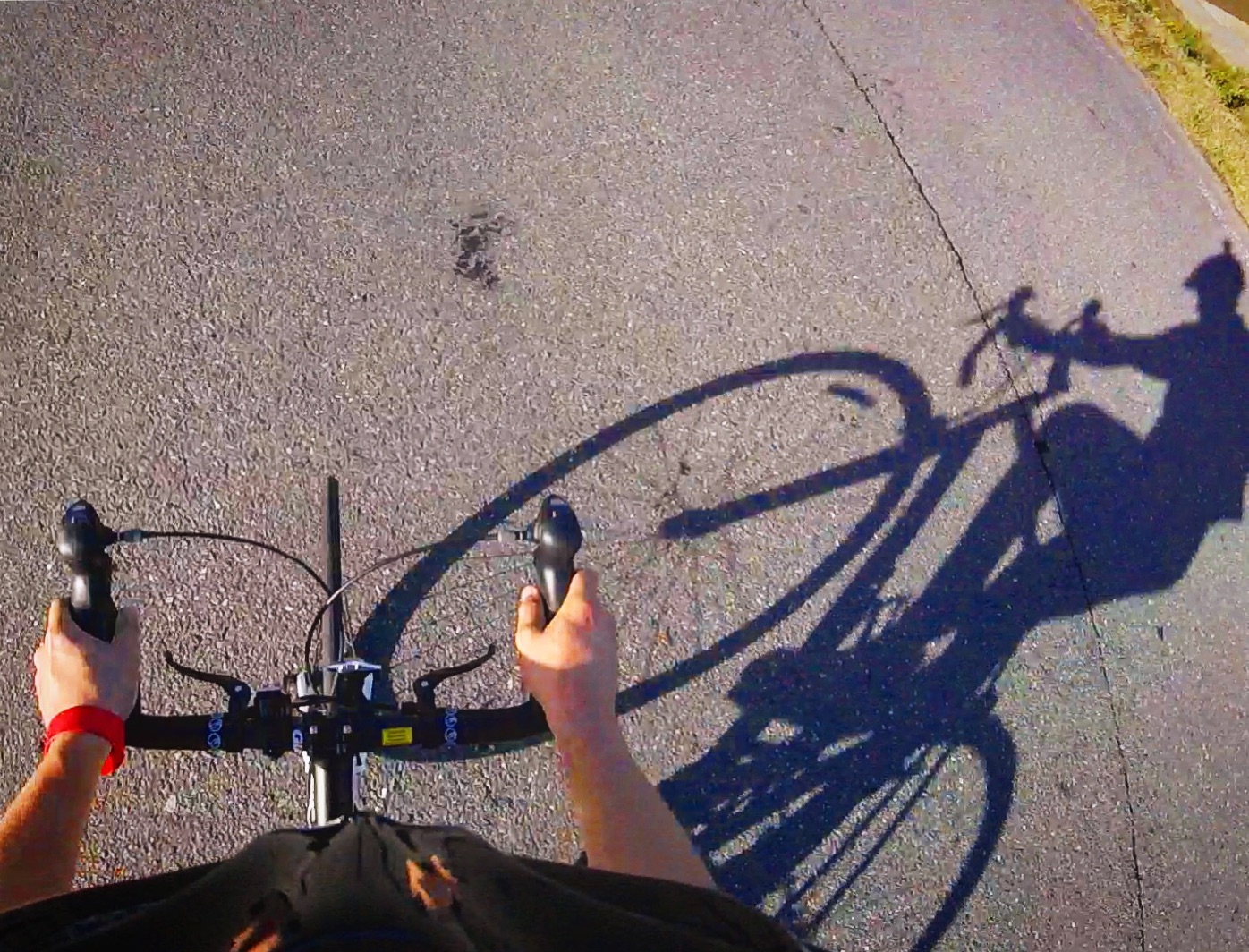 Lake Biwa’s proximity to Kyoto and the stunning surrounding landscapes make it a top Kansai destination, and there’s no better way to discover this great lake than on your own two wheels.
The Biwaichi bike trails and road networks that circumnavigate Biwako make for a delightful outdoor experience, and the current autumn foliage and cool, crisp weather make this season the perfect time to enjoy a lakeside ride. 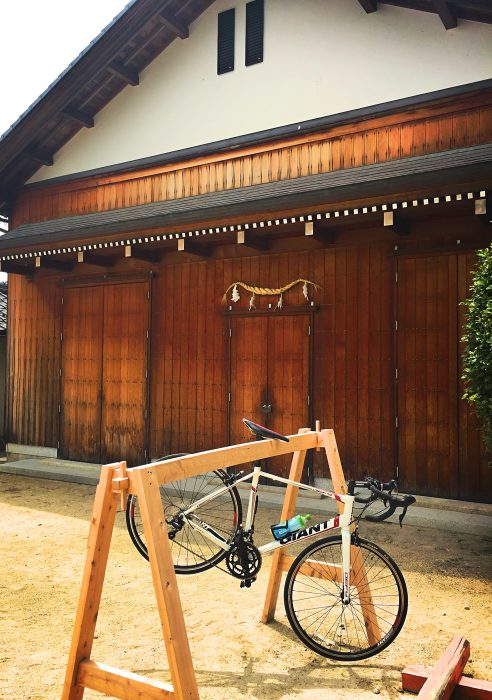 To cycle the roughly 230 km around the perimeter of Biwa (without having to ride Tour de France speeds), most riders will require two or three days. There are various points of interest along the way – restaurants, cafes, beaches, farmer’s markets, breweries, temples, and castles – so it’s a good idea not to rush the ride.

The most common cycling route is the counterclockwise path, starting at the south or east side of the lake. The signs for the Biwaichi trail are more clearly established on the counterclockwise route. However, we chose the less popular clockwise option because the cycling stretch from Otsu to Shirahige Shrine in Takashima is often plagued by tight traffic and only offers fleeting glimpses of the lake.

Our trip started at a cafe in Fushimi, Kyoto on a Friday afternoon. It was raining so we donned our wet weather gear before heading out (it is a good idea to at least bring a waterproof jacket on your ride). We stuck to the main roads leading through Higashiyama via the tunnel and into Yamashina. Stopping briefly at Asahi Cycle in Yamashina (a chain of fairly well-stocked bicycle shops), we bought a few helmets before continuing on to Otsu city in Shiga prefecture, which sits on the south side of the lake. 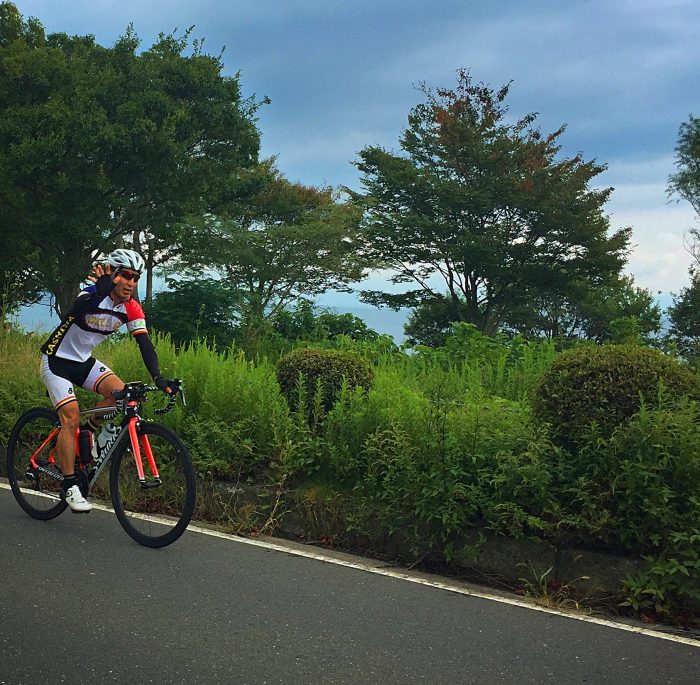 After leaving Otsu, we continued through tight and fairly busy city streets along the west side of Lake Biwa. These streets are lined with an abundance of convenience stores and restaurants, so you can easily stop and grab a bite to eat. Our first notable stop was at Shirahige Shrine, which features a torii gate in the water that offers splendid views and lush photo opportunities, especially at dawn and dusk. The lakeside views begin to open up after the shrine and the city atmosphere melts away behind you. After arriving in Omi-Takashima at about 7:00 pm Friday evening, we put the bikes down and headed to an Okonomiyaki restaurant for dinner before setting up the tents on the lake’s shore. After a quick swim and a little socializing, it was bedtime. 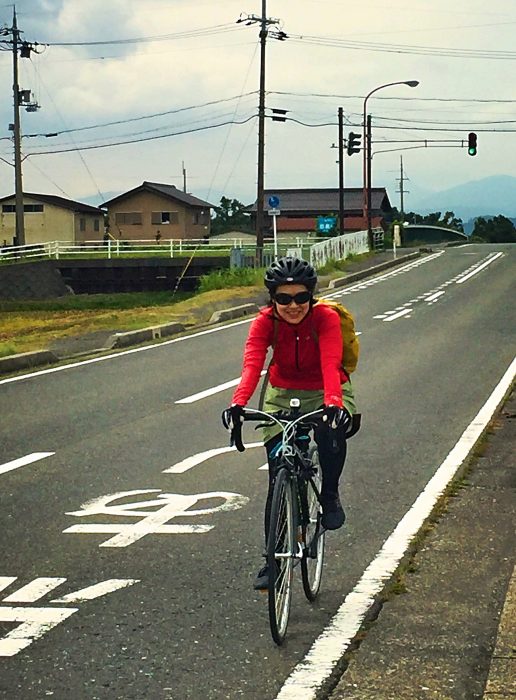 Saturday morning began with lakeside coffees and oatmeal on the camp stove before packing up and getting back on the bikes. It is not long before we discover the northwest, north, and northeast areas are the highlights of the journey as far as lake scenery and local charm go. In these parts, the bike trail winds tight to the coast and there are various places to hop off for picnic breaks or to watch the windsurfers and the jet-skiers at play. The only slightly challenging climb of the trip also comes at the north of the lake when you wind up a fairly steep incline before a fast descent into the rice field-lined country streets. At the north end of the lake, there is a ferry outpost (Chikubushima) that shuttles day passengers to one of the lake islands and back (the ferry service also connects to Imazu and Nagahama ports). More information about this ferry is available in various languages at biwakokisen.co.jp/en.

The city of Nagahama on the northeast coast of the lake is one of the hidden gems of this cycling adventure! The three main highlights of this city include Nagahama Castle on the waterfront, an onsen next to the castle, and most impressively, a brewery (Nagahama Roman Beer), which serves various kinds of craft beer and tasty food pairings to match. (The omi-gyu (local beef) is the true culinary treat of the Biwako region, and there is omi-gyu beef sushi on the menu at the brewery). After enjoying a warm, soothing hot spring bath (¥650), the brewery, located just minutes from both the castle and the central Nagahama train station, was the perfect place to refresh after a long day of pedaling. There are various hotels also along the waterfront and next to the castle, as well as lakeside camping spaces close to the town. 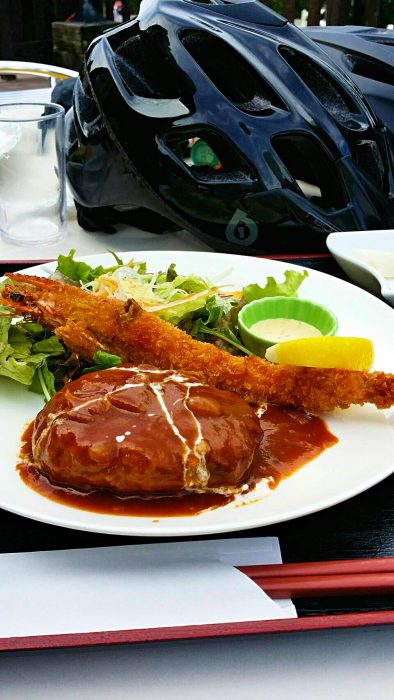 To experience more of an authentic Japanese flavor, I would encourage you to stop at the “Michi-no-Eki” stops that dot the main route around the lake. These are essentially roadside markets that offer local produce, restaurants with menus that often include local ingredients, and handicrafts that are also generally locally made. I especially enjoyed the Kusatsu Michi-no-Eki on the southeast side of the lake. The Rock Bay Garden Restaurant terrace provided a cozy spot for lunch on our final day.

If the only thing holding you back from cycling Lake Biwa is the lack of a set of wheels, you need not hesitate. There are bike rental shops at a few of the major cities around the lake. One of the more convenient and English-friendly stores is located at Maibara Station. The Biwako Isshu Cycle Rental shop rents out major-brand bicycles and helmets. Bike rentals cost around ¥7,500 and reservations can be made online before arrival. (Cycling shoes are not available for hire, however, and the bikes are not equipped with baskets or racks).
So, why not make the most of this autumn season with a Biwako cycling adventure? Japan’s great freshwater lake awaits you!

A Wander through History
Kyoto Ablaze with Autumn