As the heat of summer begins its oppression, we can turn for distraction and refreshment to the array of quirky drink products that hit the shelves in the spring; in particular, a compelling variety of brand-new canned alcoholic concoctions. Non-alcoholic and alcoholic beverage companies in Japan often embark on limited edition themed drinks to welcome and celebrate each of the four seasons of the year. This spring, the tradition brought the release of a diverse range of canned grog to complement the existing range, which includes beer, chu-hi, and drams in a can.

The large variety of pre-mixed drinks on the shelves guarantee an appeal to a broad range of people. Of perennial appeal is the highball, and whisky drinkers will welcome the recent additions to this range.

These colourful canned whiskies, which generally have an average alcohol level of nine per cent, are readily available in convenience stores, vending machines and supermarkets. Brands are forever accumulating and flavours have recently multiplied, including Suntory’s April release of their Torys Coke & Lemon edition, the fifth addition to the whisky giant’s continuing flavour portfolio: Torys Original Extra, Torys Ginger, Torys Yuzu (winter edition), and Suntory’s Kakubin. One can only guess at the flavours and mixes to come.

Until recently, Suntory was the major player in canned whisky, supplying millions of thirsty drinkers with their elixir. But due to the surge of popularity and additional capital available to drinks companies, other brands have joined the movement and began to supply the Japanese alcohol beverage market with premium canned highball options. This in turn has encouraged consumption. Presently there are at least 10 varieties of drams in a can on the market, which include a mixture of both Japanese and foreign blended whiskies. This proliferation has had a significant effect on Japan’s whisky business.

Although these drinks are portable, recyclable, and extremely light compared to lugging around a full bottle of whisky and soda water, they still cop flack from the whisky aficionados. Another Japanese whisky giant, Nikka, which is owned by Asahi and probably Suntory’s main rival, released a high quality canned highball using premium Taketsuru pure malt. The use of this particular expression caused an outrage amongst the purists in the whisky community — you don’t use a single malt in a mix! Whisky connoisseurs expressed their anxiety and fear that something bad was happening to the industry.

So, are they any good? This may be debated till the end of time.

Although I am a devotee of drinking single malt whisky neat, in my opinion, canned highball potions can be amusing and are certainly a great alternative (given the occasion and weather) to other alcoholic beverages such as beer.

Let’s face it, they are reasonably priced (Torys Coke & Lemon retails around ¥160 while the premium mix from Nikka is around ¥300) and can be refreshing, especially between the months of June and August when the weather is demanding. In any event, purist, progressive, newcomer or novelty seeker, it is worth giving the whisky and soda canned dram a go.

IW Harper
Highball
• Licenced by Kirin
• ¥200 yen • ABV: 9% • 250mls
• Comment: If you are looking for something very fizzy then this is possibly the best one out of the international varieties.[/box] 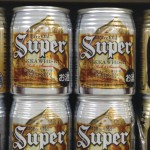 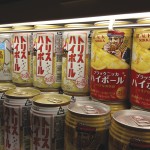