Kokopelli, the native American deity, is associated with abundance and fun. He brings new life, plenty, and, to the Hopi and other original nations of the US southwest, he embodies the spirit of music and play. For all these reasons he is the emblem of bar-restaurant Kokopelli in Namba.

Kokopelli offers classic American dishes prepared with the care and flair of a chef who has trained internationally and worked in a Michelin-starred restaurant.

Burgers, chili, buffalo wings, roast pork, Cajun-style prawns — each with its own twist.

The owner-chef Masatoshi Yamamoto is a thoughtful, welcoming gentleman with impeccable English and an evident passion for his trade, which has taken him across continents. He trained in Japan and then continued to train and work in France, in Alsace. This was followed by several years back in Japan in a Michelin-starred French restaurant. Then he moved on again, this time to the US, specifically Pasedena, and later back to more European-style cookery Japan.

As with many people in Masatoshi’s trade his overarching ambition was to start his own place and in October last year, he opened Kokopelli, where he is putting all his skills and international influences to work. “Like using French skills and making American cooking,” he told me.

The food: the burgers (¥800) are big and satisfying and you can choose extra toppings (for a small extra charge) such as cheese, bacon, avocado or jalapenos. There’s the pulled pork sandwich (¥900) with its piquant sauce — and how many places in this region serve pulled pork sandwiches? The buffalo wings (¥750)
are appropriately spicy, and served with a blue cheese dip, just the way they should be. The garlic-lemon prawns (¥500) jangle with flavour. Then there are the creative twists: the chocolate in the sauce for the signature roast pork, the hint of coffee in the chili.

Masatoshi describes the food as “American-style comfort food that everyone can try.” And the master would like to develop the theme, speculating that in the future he might introduce more homey classics like meatloaf or prawns and grits. Most intriguingly he cites an interest in native American cooking, proposing “a couple of dishes that have a native American influence.”

Native American food features game meats, such as venison and rabbit, which are problematic in Japan — not too many buffalo around Hozenji. But some of the spices and flavouring can be applied. He talks of a kind of stew that immediately conjures in my mind images of communal eating around a big pot on an open fire under the stars.

Kokopelli, being a fun-loving deity is not averse to a drink, and here another of Masatoshi’s passions becomes evident. There are over 30 kinds of beer. There’s Kirin (¥500) on tap and the fridge is full of beer from the US, Mexico and Europe. There are the obvious names like Budweiser (¥600) and Corona (¥650), but there are also micro-brewery beers such as Samuel Adams (¥850), and sometimes Anchor. Californian wines fill out the North American drink theme.

The restaurant is distinctive, clearly one of a kind. The interior theme uses white and wood, which evokes adobe without imitating it. There are images of native Americans and ornaments and decoration of native-inspired design. The music, all American again, is just low enough that you can actually speak without shouting.

The location in the warren of colourful, characterful streets around Namba’s Hozenji temple is perfect: Kokopelli the deity may not be native to these shores, but his dedication to the enjoyment of plenty and fun makes him the perfect complement to this community. 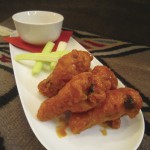 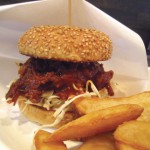 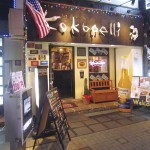 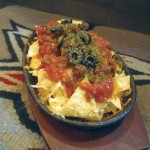 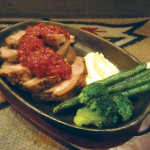 Dram in a can
The rise of craft beer