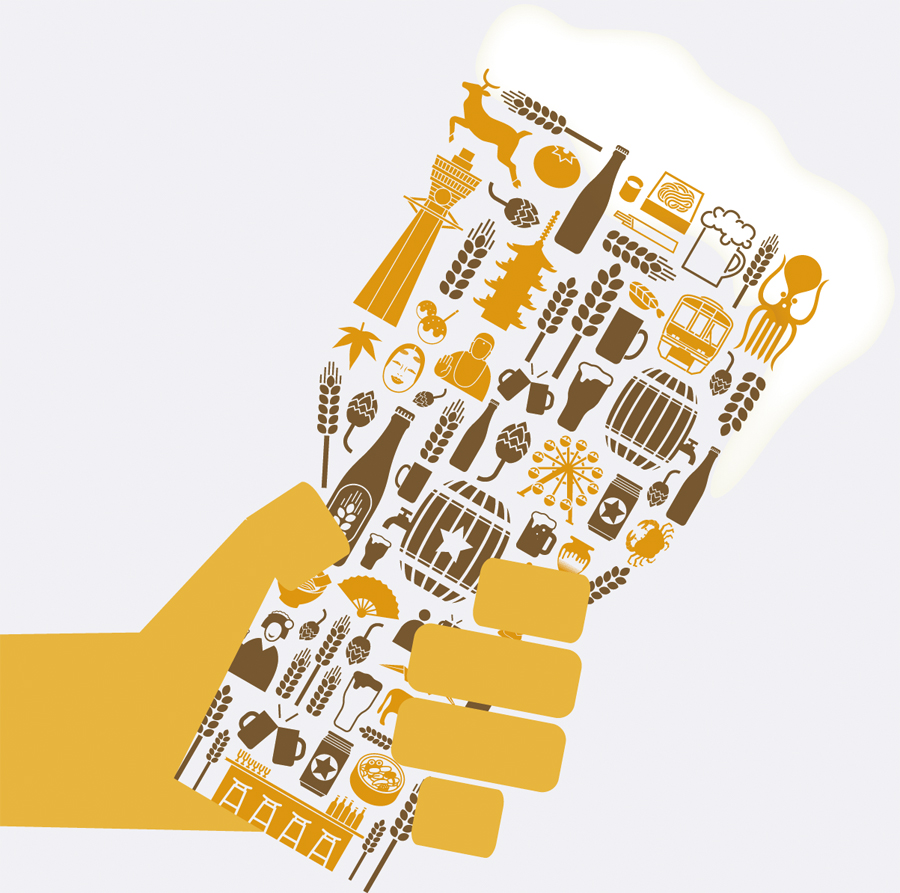 Ajen Birmingham, sporting khaki cargo shorts and sunglasses on an unusually hot May afternoon, leads us through a quiet Osaka neighbor-hood. Birmingham, a 31-year-old from the United States who moved to Japan in 2004, is looking out for Kansai’s craft beer scene. The Minnesota native has a long relationship with craft — back home, he says, the dairy aisle and the beer aisle were about the same size. But when he started exploring Japan, he was baffled by the lack of variety.

On this May afternoon, he’s our beer sherpa, introducing bar owners and brewers across the region. After a single-file shortcut through a narrow path, we arrive at our destination, where revelers having a barbecue are standing around a keg, the grill all but ignored.

The party was taking place just outside Minoh Beer’s brewery in Minoh city. Minoh Beer, popular among Japanese craft beer fans and a regular winner at international beer competitions, got its start in 1996 when Masahi Ohshita spun the family’s liquor shop business into a brewery. Their beer can be found
in liquor shops or beer bars around Japan (including three brewery-affiliated bars in Osaka, all of them called Beer Belly).

The Kansai craft beer scene falls within a national trend of growth in the craft beer industry, which kicked off in 1994 thanks to tax reform allowing small-batch production to bloom. Today, there are more than 200 craft breweries across Japan. In the Tokyo-Yokohama area, rapid growth is underway, with new craft bars opening faster than most drinkers can keep up. In Osaka, three craft beer bars or shops have opened in the last two months, with more on the way.

On our visit to Minoh, brewmaster Kaori Ohshita is trying to be in four places at once, minding the brewery, taking guests on tours, ringing up customers, and sharing notes with a brewer from Yokohama who has come to study the craft. When she gets a rare free moment, she says that she hopes craft beer will slowly become part of the local culture, becoming the daily beer that people drink. Price, she says, is a major challenge, especially among Kansai customers known for being discerning with their yen.

Kohei Ando, the brewer from Yokohama’s Bay Brewing who was studying Minoh’s techniques, described another issue that separates Kanto and Kansai. “In Tokyo, there are so many beer fans who come to the pub and know a lot about craft beer,” Ando says. They check the Twitter feeds and blogs of the bars and come specifically to try the latest offerings. In Kansai, there aren’t as many such customers — at least not yet.

Ando once worked at Qbrick, an Osaka craft beer bar that sits in the middle of a business district. “There are so many salarymen,” Ando says. But even among those salarymen, new beer fans can be born. The best way for the industry to grow is by word of mouth, Ando says, echoing other brewers and promoters.

Qbrick itself celebrated its seventh anniversary this year. The bar is home to 16 taps and about 200 varieties in bottles. Owner Takuya Yamamoto says the early years were rough, but through beer festivals, the scene slowly grew, and eventually new beer fans joined the office workers. 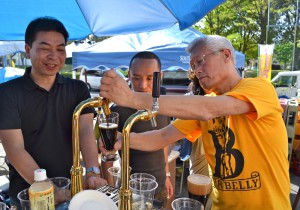 Further south in Sakai is Eni Bru, where owner Keiji Nishio turned a chance tasting of Nagano-brewed Yona Yona Ale eight years ago into a successful craft beer bar with 21 taps. Nishio and his staff focus on creating relationships with customers, introducing beers to people based on what they might like. Further, he makes sure his staff stores and serves the beer according to the breweries’ standards, which some uneducated or careless bar or liquor shop owners ignore. The problem, according to Nishio and others in the industry, is that one bad experience leads to a bad reputation for all craft beer. Kansai drinkers especially, Nishio says, will let others know about any dissatisfaction.

Of course, some liquor shops have successfully broken into the craft market. In Osaka, the Asahiya liquor store boasts a wide selection of Japanese craft and imports, and monthly beer-tasting parties draw drinkers from across the region. At a recent party, a mix of Japanese and non-Japanese attendees enjoyed the featured beer — from California’s Stone Brewing — and then tapped the substantial beer fridge.

In Kyoto, Tadg’s Irish Bar and Restaurant started off serving Minoh Beer and eventually grew to offer 25 kinds of beer. Recently, the bar began hosting events featuring the main lineup of one top brewery with the brewmaster present to talk about their techniques. Owner Tadg McLoughlin says the focus on craft beer has changed his bar. “Rebranding as a craft beer bar … has attracted a new breed of customers who are very knowle-dgeable of Japanese and world craft beers,” McLoughlin says. “These are both Japanese and foreigners who deliberately seek out our bar.”

Elsewhere, Ai Tani’s Craft Beer Base, which recently opened in Umeda, features a four-tap tasting room with a rotating selection in addition to a bottle shop. Tani, who once worked at a Belgian beer bar, later began ordering craft beer online, where many in Japan go for variety. With her shop, she wants to offer such variety at an easily accessible location. Looking forward, Tani sees more growth in Kansai, perhaps coming from established breweries elsewhere in Japan looking to expand.

One such brewery is Baird Brewing, one of the leaders of the Japanese craft scene that operates three taprooms in the Tokyo area in addition to its brewery and original pub in Shizuoka. Managing partner John Chesen says that while the company already sells beer and participates in events in Kansai, they would love to open a taproom in the region. But before they do, a current project to build a new, larger brewery must be completed, highlighting a problem that many successful breweries face as their popularity grows. “Our new brewery should expand our capacity by a factor of five,” Chesen says. “So once it’s operational we’ll be looking for thirsty folks in Kansai with whom to enjoy a pint or two.”

Meanwhile, Birmingham hopes to open his own bar by next spring, in addition to managing events such as the World Beer Taster set for this September in Osaka. More thanany- thing, he’s looking to give the Japanese public what he thinks they demand — variety. “In a country where variety is taken just as seriously as quality, I find nothing more un-Japanese than not being asked what kind of beer I want to drink with my meal,” Birmingham says. “Craftsmanship and quality are in the Japanese blood. That’s why, if it’s done right, craft beer can’t go wrong in Japan.”

For a taste this month, check out the Great Japan Beer Festival in Osaka, which takes place in the Kyocera Dome Sky Hall from July 14th–16th.