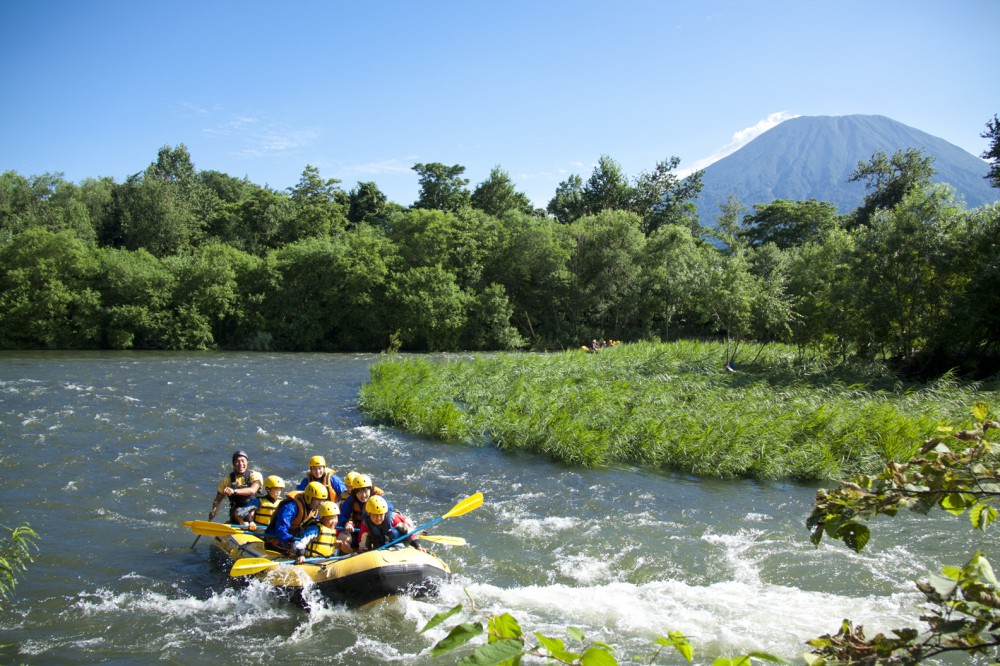 Niseko is world famous for the quantity and quality of snow that blankets it each winter, but it’s still a well kept secret that the region’s true beauty is revealed only after the white melts away.

The green season is from June till October. Niseko transforms from a white wilderness into a thriving farming region and a hive of activity. Skis, boards and sleds are traded for bikes, boats and hiking boots while the farmers emerge from hibernation en masse.

A drive through the region will take you along rivers, carrying melted snows to the ocean and through an immaculate patchwork of system of manicured farmlands. From the time the first buds push through the snow, Niseko’s fresh produce kicks into gear.

View Plaza is famous locally for offering the freshest produce. A pleasant morning bike ride from the hub of Hirafu, it’s alive with farmers delivering the day’s harvest and day-trippers and locals taking home basket-loads of fresh fruit, vegetables and plants.

The river system running though the valley areas of Niseko is fed by a huge volcanic network of mountains, the most prominent of which is Mt Youtei – known as Ezo Fuji for its striking resemblance to Mt Fuji. The mountains release tons of melting snow bringing the rivers to life for fishing and other activities in summer.

The river roars to life in spring and carries rafts, boats and kayakers through the Niseko region. Hundreds of people brave the icy flows of the Shirebetsu for a thrill of a boat ride over rapids and through a pristine natural environment.

Bikers are out in force and road cycling meets mountain biking as the mountains unleash their steep dirt trails onto flat valleys of quiet, winding roads. Cycling events are a regular occurrence throughout the region, selected for its epic scenery and lack of traffic. Ski rental shops transform into bike sheds while the local restaurants are sought-out destinations for the touring motorcycle crew.

Since the first western-style condos were built in 2003, Niseko has burst into a well-serviced, modern tourism destination with hundreds of new condos and houses filled with summer guests barbecuing and enjoying the temperate Hokkaido summer. An evening stroll through Hirafu on a Saturday is sure to make you hungry as the air is filled with the smell of grilled food and the sounds of groups cooking and laughing. Accommodation options range from backpacker to premium condos all year round.

Niseko is pegged between Mt Youtei and Mt Annupuri which punctuates the Annupuri range running all the way back to the Sea of Japan. Hiking is in full swing from May with people climbing Mt Youtei to stay in its hut overnight, or riding the gondolas up Mt Annupuri. Others make multi-day treks from Annupuri all the way to the ocean.

The views are spectacular everywhere. Whether perched on top of a peak, or driving along the panorama line, you’re sure to encounter breathtaking vistas and plenty of curious wildlife.

Encompassing Kutchan, Hanazono, Hirafu, Niseko Village, Annupuri and Niseko town there is no shortage of things to do as each resort area offers activities, restaurants and accommodation. Niseko Village’s Pure is a fun adventure park with balloon and horseback riding available at Annupuri.

The Hirafu and Annupuri gondolas run from the beginning of July and well into autumn offering a great way to discover the changing seasons at higher altitude. After the rapid onset of summer, the transition to autumn is beautiful, as a variety of trees paint colourful hues of orange, red and yellow across the ridges.

Fishing rods and golf clubs seem to be a permanent accessory to the locals’ cars with four outstanding 18-hole courses and hundreds of well known (and even more not-so-well-known) fishing spots.

Niseko Village, Hanazono and Rusutsu all offer outstanding quality golf courses and accommodation which services all of these is easy to find. After a round of golf with views to Mt Youtei and surrounding mountains, it’s easy to understand why most of the locals start work at midday!

Niseko is privileged to be surrounded by the freshest produce in Japan. Dairy farms, cheese factories and breweries are scattered throughout the area and the farms grow everything from edamame, wheat, asparagus, rice, and the famous Kutchan potatoes.

Spring water bubbles to the surface after filtering through the bedrock of Mt Youtei. Local restaurants prize the water for its taste and purity. You’ll often see cars parked beside the springs collecting spring water in bottles – most likely a friendly restaurant owner preparing for the evening.

As pure water finds its way to the surface, so too does the mineral rich, volcanically heated water that flows into the dozens of onsens in the area. From Hirafu to Moiwa and all the way around the panorama line there are hidden onsens and well known onsen-style ryokans that cater for both summer and winter trades.

Nestled in the mountains, Niseko is only an hour from each ocean. The sea of Japan to the west and Pacific ocean to the east. Hokkaido’s famous seafood is found throughout izakayas and specialty seafood restaurants in the area.

When visiting Niseko, Hirafu village is a hub but only one of many beautiful towns making up the area. It’s a large region and worth looking further afield for a day trip to special locations like Lake Toya, Goshiki onsen or Rusutsu.

Train with a view
Shirahama time